On July 20, Microsoft reported their results for the 2016-2017 fiscal year (ending on June 30). As expected, the results were good, especially for commercial cloud products. I like to keep an eye on what’s happening in this space, so was interested in a graph published by BusinessInsider.com showing how Microsoft would meet their goal of achieving an annual run rate (ARR) of $20 billion for commercial cloud products with some ease and blow on past it to push towards $30 billion over the next year (Figure 1). 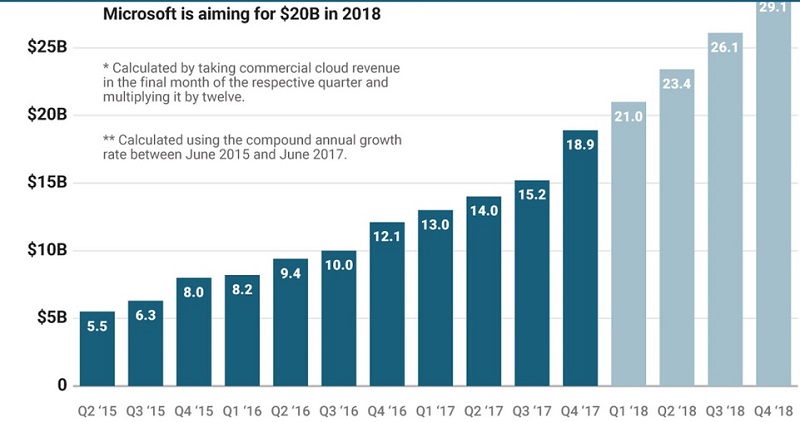 BusinessInsider bases their prediction on Microsoft achieving a similar compound growth rate over the next year. On that basis, the target is realistic.

To gain more insight into what is happening in the space, we can look at Microsoft’s latest 10-K filing, where they confirm that the ARR for commercial cloud revenues run rate was $18.9 billion. As defined by Microsoft, commercial cloud products mean Azure, Office 365, Dynamics 365, and “some other cloud properties.” It does not include the Office desktop applications, nor does it include LinkedIn.

Later in the 10-K, Microsoft says that: ”Our total commercial cloud revenue… was $14.9 billion.” This is the amount of revenue that Microsoft took in rather than the run rate..

The gap between ARR and revenue is what you expect to see in a growing market where sales grow on a month-by-month basis. More importantly, the revenue increased by some $5.4 billion (55%) over the $9.5 billion Microsoft achieved for commercial cloud products in the previous fiscal year. With this kind of growth, it is easy to see how Microsoft can get to a $30 billion ARR within four quarters and probably $30 billion in real revenue soon afterwards.

In terms of the sectors included in this category, Azure revenue growth of 99% far surpassed growth of 46% in Office 365 commercial. Dynamics 365 grew its revenues by 78%, but off a smaller base than either Azure or Office 365.

The big question that Microsoft does not answer in any financial filing is how revenues break down across Azure, Office 365, and the other cloud properties. We are left to guess what is going on.

However, we do know that Office 365 has more than 100 million monthly active users because Microsoft told us this in April 2017. Given the solid last quarter, you could speculate that Office 365 now has 110 million paying customers or thereabouts. That is, if we assume that an active user has a paid subscription.

The monthly subscription for an Office 365 business plan varies from $8/month (E1) to $35/month (E5). The first-line worker (or kiosk) plans costs $4/month. And then there are a mass of add-ons like MyAnalytics that you can buy to increase your monthly bill.

The number of paying Office 365 users differs across each quarter. To make things easy, if we assume that each Office 365 monthly active user pays $8, each contributes $96/year or a total of $10.56 billion yearly. That leaves $4.34 billion for Azure and the other products. By comparison, the last reported figure for Amazon Web Services (AWS) revenue was $4.1 billion (in a quarter). AWS generated $12.2 billion in 2016.

Could AWS earn more in a quarter than Azure earns in a year? It is a tough question to answer and Microsoft is not saying anything to help. Azure is behind AWS, but how far behind and whether the gap is closing are interesting points to debate. Especially so given Azure’s high growth rate versus the low growth (from a higher base) for AWS (4% in the first quarter).

In any case, the point is that Microsoft’s cloud properties are coining in money now and are on a high growth rate that will blow past that $20 billion ARR goal soon. As CFO Amy Hood noted: “for the first time, Office 365 commercial revenue surpassed revenue from our traditional licensing business,” there’s no doubt where Microsoft’s focus is and will be for the foreseeable future.