On March 16, 2017, I discussed the question of why contacts are a problem for the Outlook apps and noted that among other issues “Currently, no way exists in the Outlook app to add or edit contacts either. In other words, if you want to add, amend, or remove one of Outlook’s contacts, you have to use OWA or Outlook desktop.”

Well, Microsoft has now updated the Outlook for iOS app to add the ability to edit contacts. The code is in Outlook for iOS version 2.27.0, which I downloaded and installed on May 30. According to Microsoft, the feature will come soon to the Android version of Outlook.

There is not much to report about editing contacts. Open your list of contacts by selecting People in the Outlook app, then select a contact and click Edit. You can then update contact details such as their telephone numbers, email address, work address, and so on (Figure 1). 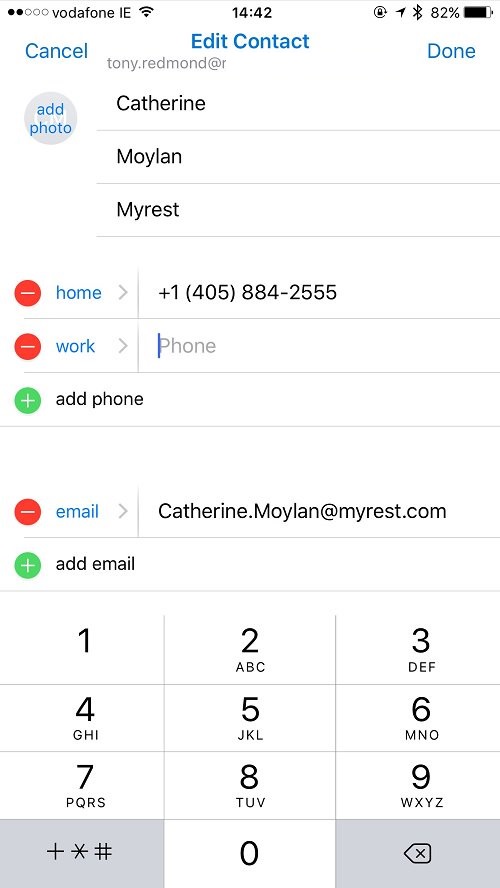 The importance of being able to edit contacts through Outlook is not that Microsoft has finally added the feature. What’s really important is how much more useful this makes Outlook contacts.

Contacts have been part of the Outlook desktop client for as long as I can remember, probably because no self-respecting personal productivity application could not include a contact book. But the problem with contacts is that they are a pain to update. You might enter some contacts in an initial fit of enthusiasm, but after that contacts are often left to wither and age. Email addresses become invalid, telephone numbers change, and people move from company to company.

Thinking about the situation, several reasons exist for why Outlook contacts are often left to rot.

First, the Outlook nickname cache, which stores previous email addresses that you use with messages, becomes the de facto method to remember contacts. The cache stores up to 1,000 addresses and manages them automatically, so why bother entering “real” contacts.

Second, mobile contacts stored in the native contact apps of smartphones are much more important to many people today.

Third, although you might capture the phone numbers of people as contacts in your smartphone, too much effort is needed to move those numbers over into Outlook contacts. Sure, you can synchronize smartphone contacts with Exchange to create Outlook contacts, but then you end up with duplicate contacts and everything is a mess.

Allowing users to update Outlook contacts direct from iOS and Android makes those contacts easier to manage. It’s a small but good change.

Another example of a small but good change is how the To-Do app extends Tasks. Like contacts, Exchange has supported Tasks for years. The To-Do app stores its items in the default Tasks folder of your mailbox and the items appear as Tasks inside Outlook. All good so far.

To-Do starts off with a general list of items that you need to accomplish. You can create extra lists for projects or anything else you are working on. Each of the lists uses a sub-folder under Tasks to store its items. 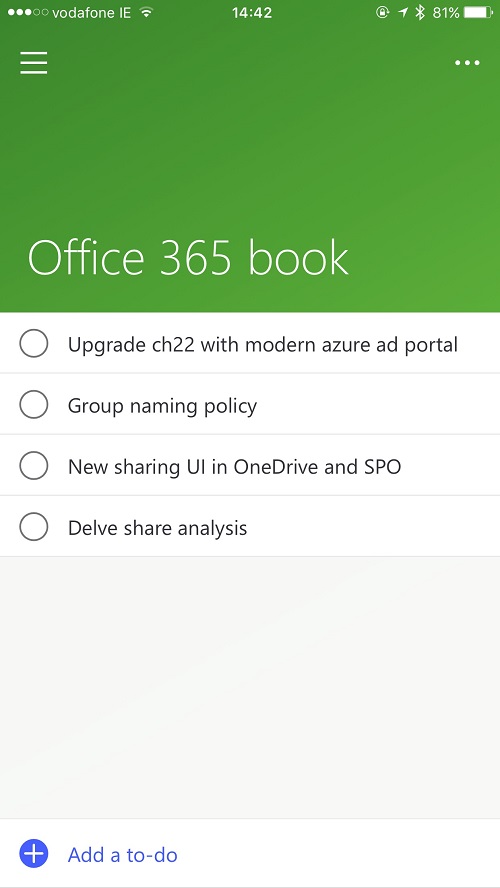 Outlook has long supported the ability to create extra Tasks folders and people have used this capability in many different ways (for example, to manage projects). However, I suspect that most Outlook users do not realize that they can use multiple folders to organize tasks. And anyway, just like Contacts, managing tasks through Outlook is something you might try once and soon forget.

I never used Outlook Tasks much in the past. Since Microsoft released the To-Do app in preview, I find myself using Tasks all the time, including multiple lists. Just having the app on the iPhone makes me think of creating Tasks when I want to remember something. The number of odd bits of paper with cryptic messages scrawled on them has decreased on my desk.

If you haven’t tried To-Do yet, remember that you must enable it for your tenant before people can use the app with their Office 365 account. Go to the Settings section of the Office 365 Admin Center, select To-Do Preview, and move the slider to On. To-Do can also be used with an Outlook.com account.

I am sure that the Outlook developers did not set out to make desktop contacts better by making it possible to edit contacts on the iPhone. Nor did the To-Do developers try to give Outlook Tasks a new lease of life when they decided to store their items in tasks folders. But they both did and it’s nice to find that old parts of Outlook become more useful through new apps.

M365 Changelog: Meeting Recap on Outlook on the web