Lists or Tasks: Microsoft Gives Many Options to Office 365 Users 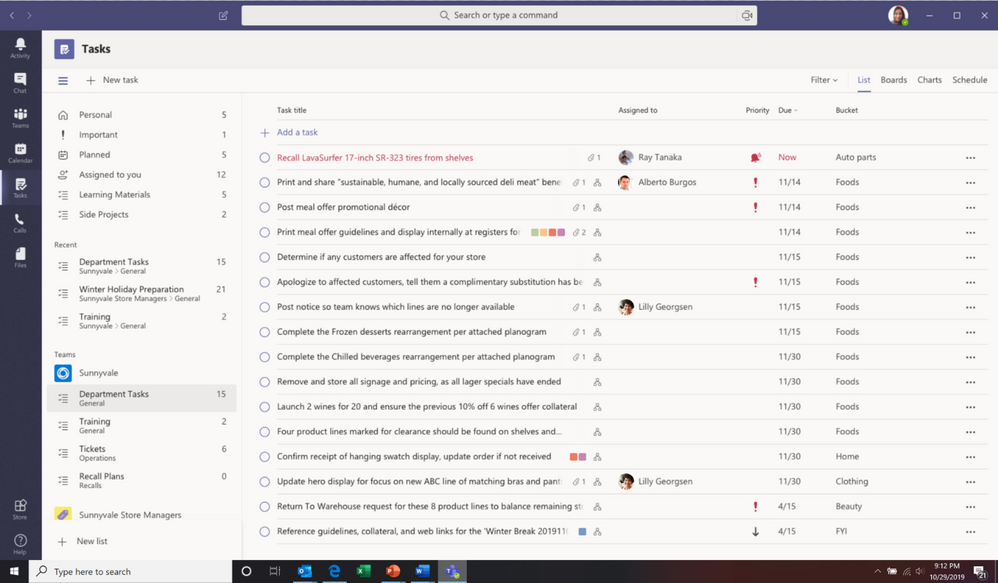 Following Microsoft’s announcement about the new Lists application at the recent virtual Build conference, the thought might have crossed your mind that Microsoft 365 is accumulating too many ways to make lists. As in:

And that’s without counting Excel or Word, both of which are used by many people to organize work items. While some might, we won’t count Project because it is in a class of its own.

Things get even murkier when you consider Tasks in Teams (Figure 1), a new major first-party app announced at the Ignite 2019 conference, described as “a cohesive task management experience that brings your tasks from Microsoft To Do and Planner into Teams.” The last update for this initiative came on April 29 when Office 365 notification MC211421 said that “the Planner app in Teams will become the Tasks app” with roll-out expected in May or June to be complete by mid-July.

The way things are lining up, it seems that the Microsoft 365 world will divide into those who use Lists and those who use Tasks.

Tasks, the Substrate, and Teams

At Ignite 2019, Microsoft spoke about the role of the substrate and how common objects (like messages and documents) could be stored in the substrate and exposed in different ways by different applications. Tasks falls into this category. Tasks are stored in Exchange Online mailboxes and exposed in Outlook, Teams, and To Do. Planner has its own Azure-based repository.

Tasks in Teams tries to unify To Do and Planner. To Do manages personal tasks while Planner manages team (group) tasks. The new app presents data from both in common views. The analogy presented is that Teams allows users to access personal files (OneDrive for Business) and group files (SharePoint Online) in the Teams Files view.

Microsoft says that they intend to rename the Planner app (as used by Teams) to Tasks. Other Planner clients will keep their current name. I imagine that Planner will also retain its own repository and Graph API (called “Tasks and plans” in the Graph documentation).

Happiness in task management all round…

But where do Microsoft Lists fit into this unified picture of task management? Well, they don’t. Lists are a SharePoint construct that’s been around for a long time. The new Microsoft Lists app seems to be comparable to applications like Airtable, which describes itself as “part spreadsheet, part database, and entirely flexible.”

Microsoft positions Lists as a wat to create, track, and share structured information (lists). They emphasize the use of Power Automate and Power Apps to use the data held in lists to automate operations and represent Lists as “the underlying database for information worker-led productivity apps.” In other words, where people might have built something in Excel or Access in the past, now they can create the list data in SharePoint and the supporting processes with Power Automate and Power Apps.

Like older lists, Microsoft Lists are built on top of SharePoint Online and the data used in lists is stored in Azure, like the other SharePoint Online data. According to Microsoft, Lists include SharePoint lists (the basic technology), a new Lists home page (to organize your lists, the lists app in Teams (which won’t confuse anyone with Tasks), and the Lists mobile app. Microsoft will deliver a set of templates (Figure 2) to help people start building lists to handle common scenarios like asset tracking.

The differences I see with classic lists are that the new implementation has more customizable views, smart rules to define conditions and actions, and alerts. Personal lists will be stored in a user’s OneDrive for Business account and shared with others from there. There’s no word yet whether people can take a personal list and convert it into a shared list stored in a SharePoint site.

Microsoft says that they expect to “ship a lot of the [Lists] tech in the summer.” Given the way that some cloud development timelines can slip, you could pencil in September or October. Targeted release customers will see the new Lists functionality first. In the meantime, a (non-interactive) demo environment is available online to show how the new application works.

As an app, Lists will be included in the Office 365 menu along with other apps (Planner, Yammer, etc.) with its own home page. Microsoft also says that a mobile client will be available in 2021.

Microsoft also says that classic SharePoint lists will continue to work as before. As Microsoft says, List are lists are lists” and “there is only one Lists product and we continue to move it forward.” I take this to mean that classic lists can be transformed into modern lists (to use the vernacular favored by SharePoint) to pick up the new lists functionality. There’s no word if the new Lists functionality will appear in SharePoint on-premises. I expect not.

Getting back to the original question, Lists don’t interact with Tasks, nor does either application have a relationship with the other. This might change in time, especially when some inventive people explore what’s possible with the Power Platform.

For now, think of Tasks as discrete items of work created for individuals or groups managed through a set of apps to match individual preferences. Lists are more structured (like a database) and perhaps longer lasting. Teams has apps to interact with both types of object. A task could become an entry in a list and an entry in a list could generate a task. But not just yet.