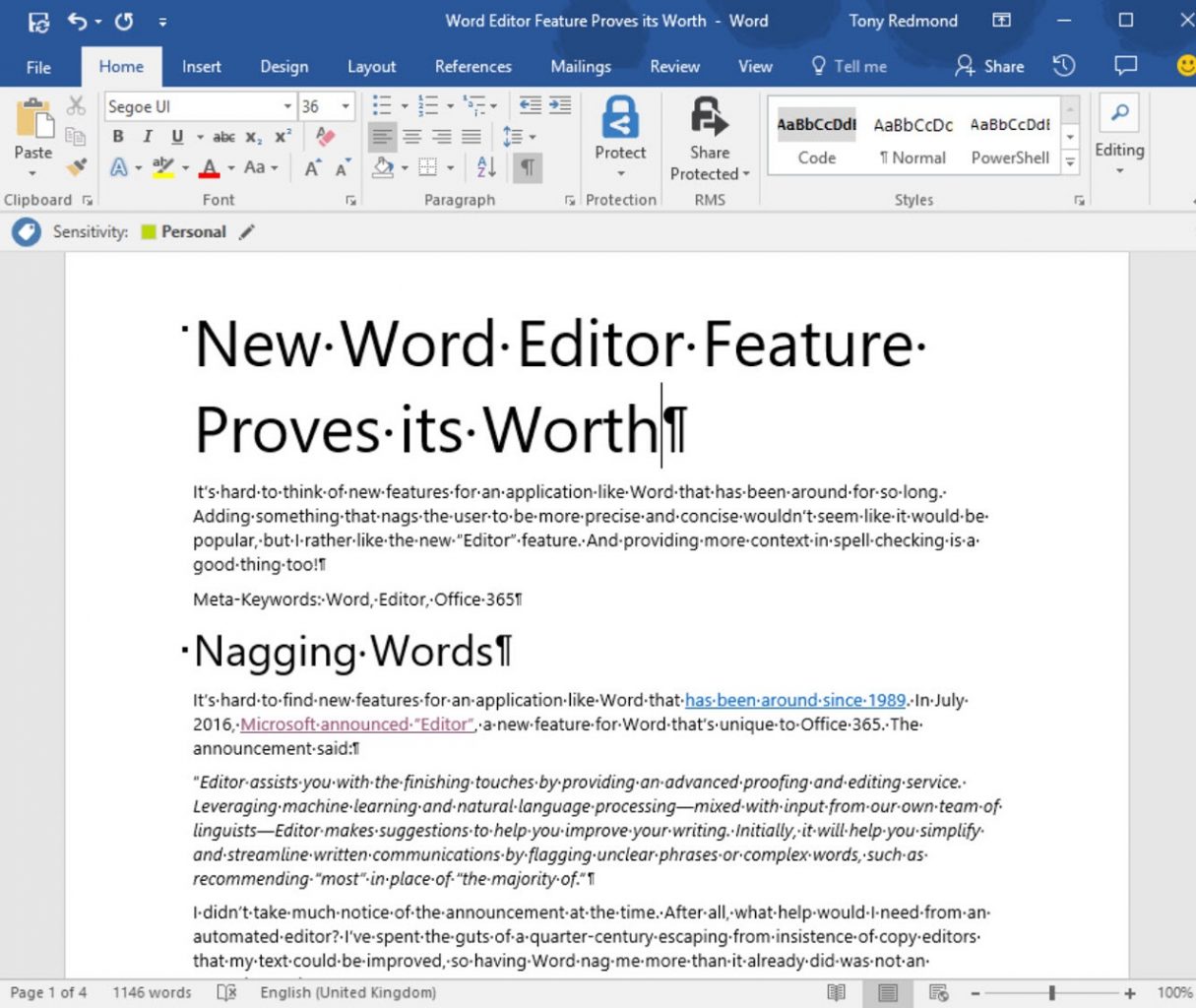 It’s hard to find new features for an application like Word that has been around since 1989. In July 2016, Microsoft announced “Editor”, a new feature for Word that’s unique to Office 365. The announcement said:

“Editor assists you with the finishing touches by providing an advanced proofing and editing service. Leveraging machine learning and natural language processing—mixed with input from our own team of linguists—Editor makes suggestions to help you improve your writing. Initially, it will help you simplify and streamline written communications by flagging unclear phrases or complex words, such as recommending “most” in place of “the majority of.”

I didn’t take much notice of the announcement at the time. After all, what help would I need from an automated editor? I’ve spent the guts of a quarter-century escaping from insistence of copy editors that my text could be improved, so having Word nag me more than it already did was not an attractive notion.

However, as it turns out, the Editor feature is really quite good and has already helped me to improve my writing. That’s quite an admission for someone who commonly turns out a million words per year in books and articles, but it’s true.

My exposure to Editor came about when I changed the update channel I use for the click-to-run version of Office. Because I rely on stable tools, I had used the Deferred Channel for Office 365 Pro Plus, which means that I get new features every four months (this article explains the different channels). The approach worked well and Office delivered as expected.

You can find out the channel used on a PC by looking at the Office Account information for an application (click File then Office Account or Account). Figure 1 shows that the Deferred Channel is selected. 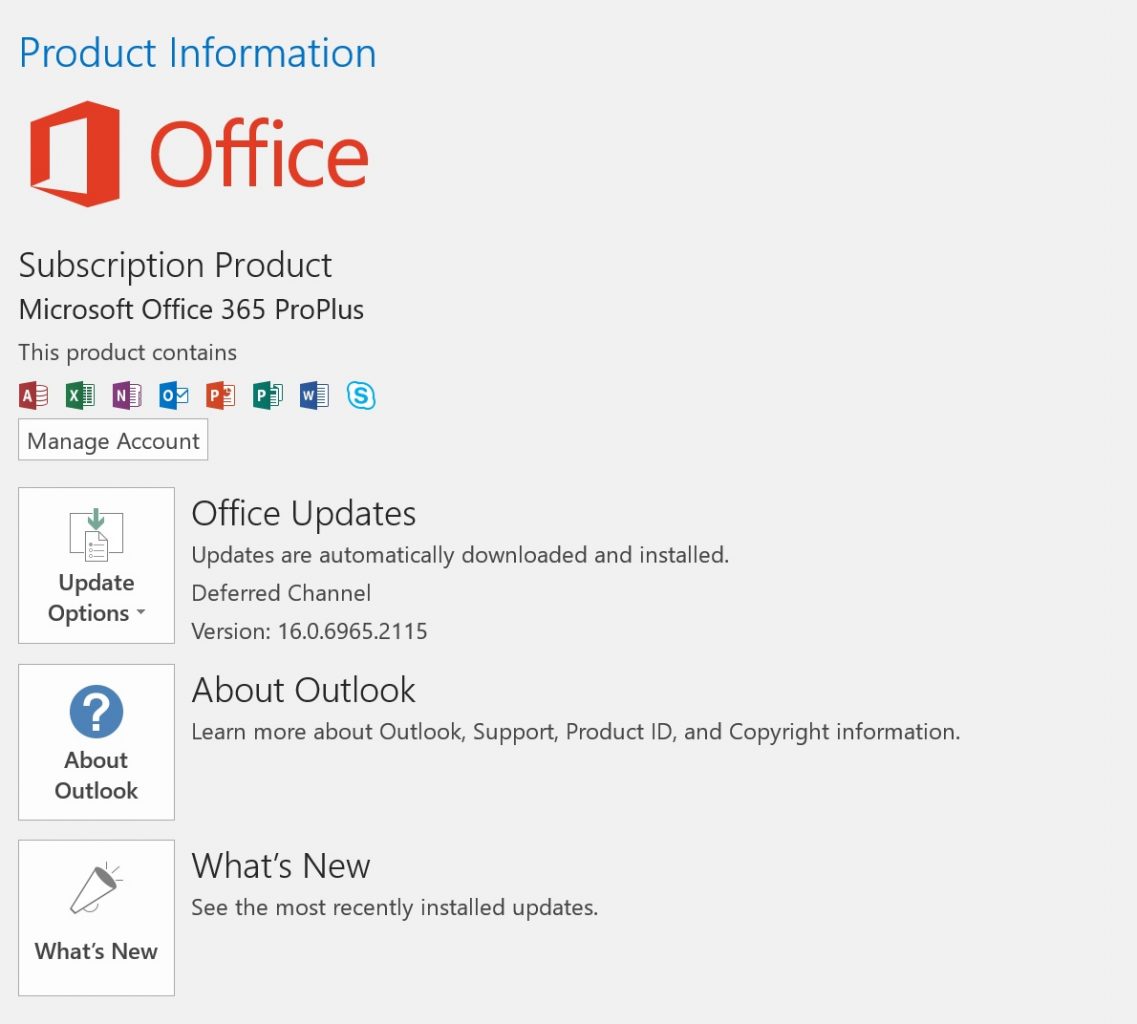 Typically, tenants use group policies to control the update channel option for user desktops to ensure that everyone uses the same version. The Office 365 Pro Plus deployment guide is a useful collection of articles that includes an explanation of how to configure update settings for clients.

Using automated tools to deploy settings is the right approach for general management of desktops. It’s also possible to update the system registry to select a specific channel. Although it would be tiresome to update the registry for all PCs, it can be an effective approach when you want to test new versions of Office on just a few PCs. The registry key that controls the update channel is HKEY_LOCAL_MACHINE\SOFTWARE\Policies\Microsoft\office\16.0\common\officeupdate.

The values used to select an update channel are:

In any case, after updating the registry to select the FirstReleaseCurrent channel, I invoked an update. The channel switch kicked in and a new version of Office was downloaded and applied.

At first, I didn’t notice Editor. That is, until I loaded in an old article and discovered that Word seemed to find a lot to complain about in the text. Anyone who has used Word understands that its proofing tools highlight spelling errors and, if selected, grammatical snafus. What happened now is that text previously ignored was highlighted in a different way. For instance, Word is now keen on eliminating unnecessary words to make text clearer and more concise (Figure 2).

I’m odd (very odd in the opinion of some), but I liked the nagging. Writers often get worried about the word count for an article, but copy editors never stop reminding writers that it’s the quality rather than the quantity that counts. Because Editor focuses on eliminating unnecessary words, I found that my writing habits changed, perhaps in an instinctive attempt to make Word happy.

But seriously, I found that the new checks highlighted a number of longstanding habits. Here are some of my personal foibles. I use “all of” where “all” will do. I am found of “particular” where “specific” or “certain” is more precise. I fall into the trap of telling people that they have to do something where they really must do it. I say “as long as” where “if” is sufficient. And I am fond of using “in order for” where a simple “for” is all that’s needed.

None of these quirks are important. In fact, a case can be made that they are part of my writing style. Indeed they are and there is no need to slavishly accept every recommendation Word makes. If everyone wrote in the same way, text would be bland and boring. However, it’s good to be concise and precise when writing about technology, so I welcome the reminders, even if I reserve the right to say “no”.

I also liked the upgrade to the spell checker, part of Microsoft’s effort to provide tools that educate as well as correct. For example, instead of offering a list of replacement words, Word now provides some context to enable users to avoid common misuse of words. For example, people often confuse compliment and complement, like they do with principal and principle (if principal is in your job title, please make sure it’s the right one). Word now gives additional information to help users select the right term. It’s a small but pleasing enhancement.

Word Options reveals the checks performed in a document. An array of new grammar settings is available, including checks for clichés (Figure 4) and the Oxford comma (to which I subscribe). The death of clichés is perhaps too much to expect, but some reduction would be nice. A list of clichés is available online for those who wish to try some in documents. I selected eight examples from the cliché list (see below) and Word advised me that I should consider avoiding overused expressions for just two. Perhaps some more work is necessary before cliché eradication is possible.

Sample clichés: Always look on the bright side. An arm and a leg. Another nail in the coffin. An oldie but goodie. Ants in his pants.  Any port in a storm. Anything goes. Apple of my eye. At wits’ end. At the crack of dawn. 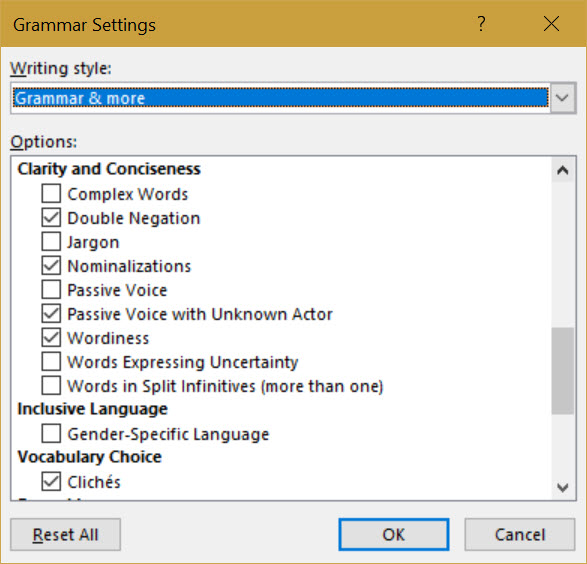 I attempted to test the Editor to discover how effective it is in non-English languages but failed. Perhaps I installed the wrong bits or maybe it was that the translated text produced by Google Translate was so good that Word declined to correct it. In either case, it would be interesting to hear how Editor works in French, German, Italian, and so on.

Because it’s cloud-based, the Editor feature is not available to people who don’t subscribe to Office 365. Microsoft promises that Editor will become more accurate over time as it learns from the real-life habits of writers (both bad and good). It’s a pity that the feature can’t be packaged in a suitable format for delivery on-premises. People once said that it would be impossible to provide spellcheckers for browsers. I suspect that a way will be found to provide more intelligent tools to other versions of Word.

I like when updates provide real and immediate value and consider the upgraded Word Editor to be in that category. Whether it has a long-term positive effect on the quality of my writing remains to be seen. But in the interim, I’m happy to be more concise.