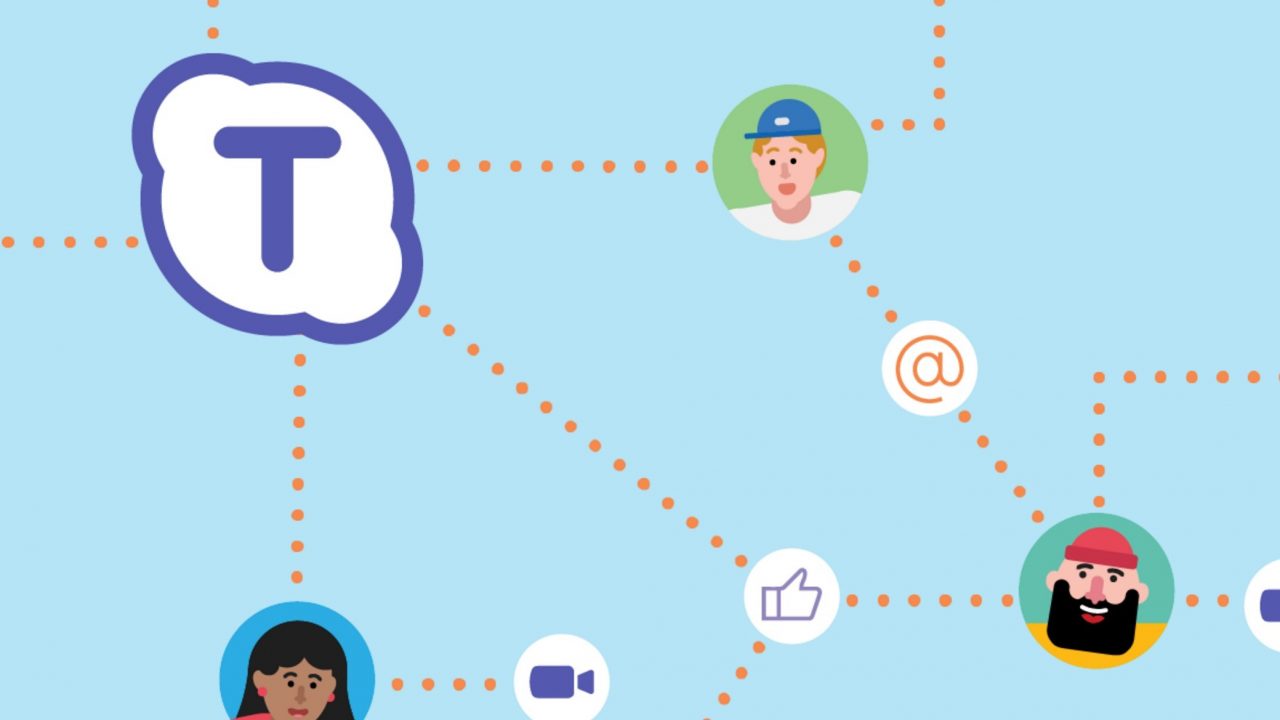 Microsoft is working on a new collaborate platform under the Skype umbrella called Teams. I was able to reveal a bit more information about the product a few weeks back and since then, I have obtained a couple more bits of documentation and videos that give us a nearly complete look at the platform.

The platform is organized by teams and channels with teams being the top of the hierarchy and channels being the sub-categories for that team. It is possible to favorite a channel so that it is always present and hide them if needed as well.

When you create a team, you invite co-workers by their email address and you also have the ability to add by security groups too, which makes it faster than adding users individually for large groups. Once the team is created, you then can add new channels to organize the grouping; what is not known is if a user has to join a team or if they are automatically added if you provide their email. I suspect they have to accept the invite as automatically adding users to a team would quickly increase the noise at a personal level. 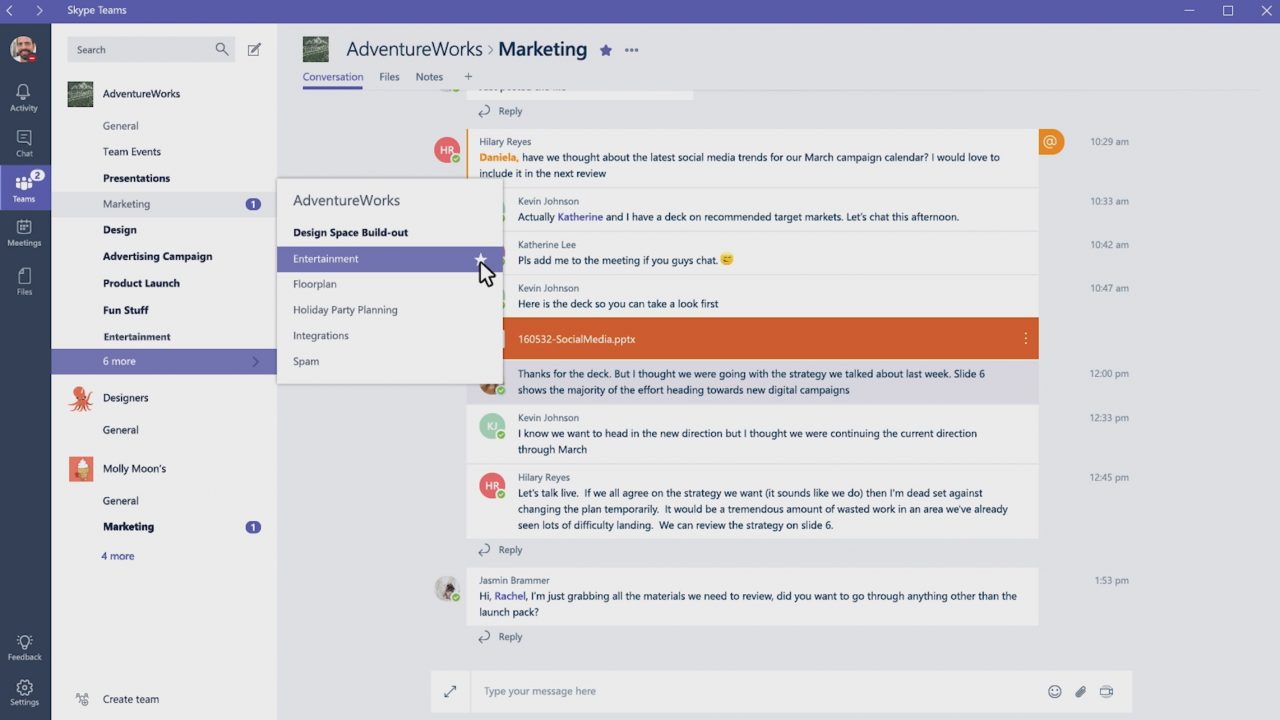 In a channel, conversations are threaded individually, making it easier to control the flow of conversation from becoming tangled and disjointed. Users also have the ability to bookmark a thread and save it to their favorites folder and Skype Teams also support “@” mentions to flag a specific user to a thread.

Files can be embedded in a chat and it makes collaboration much easier. By clicking on a file, it opens up a document editor with the chat thread next to the document with everyone in the thread able to interact and work on the content together. 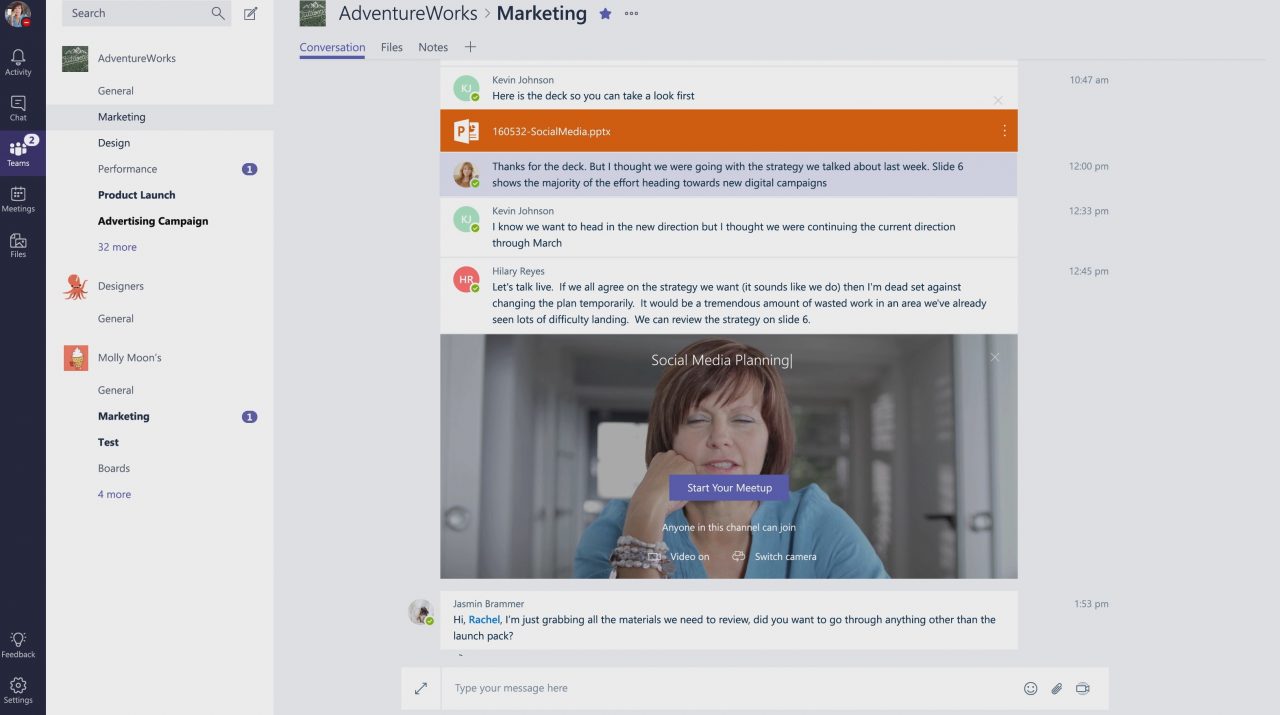 Seeing as this is a Skype platform that is known for video group chats, this functionality is built directly into the tool. By clicking the camera icon on a thread, you can open up a group chat and then quickly invite those people in the thread or the entire team in the channel to a conversation. The goal of this feature is to make communicating with those working directly on a file or chatting in a thread easier than the traditional Skype method of creating a new chat room every time you need to host a conference call.

Group calls enables the ability to share your screen and documents as well; much like a typical Skype call. Nothing overly complicated about this feature but it opens up a faster communication medium when the need arises. One befit of using the Skype Teams platform is that anyone on your team can see when a call is on-going and if they would like, can join in at any time. 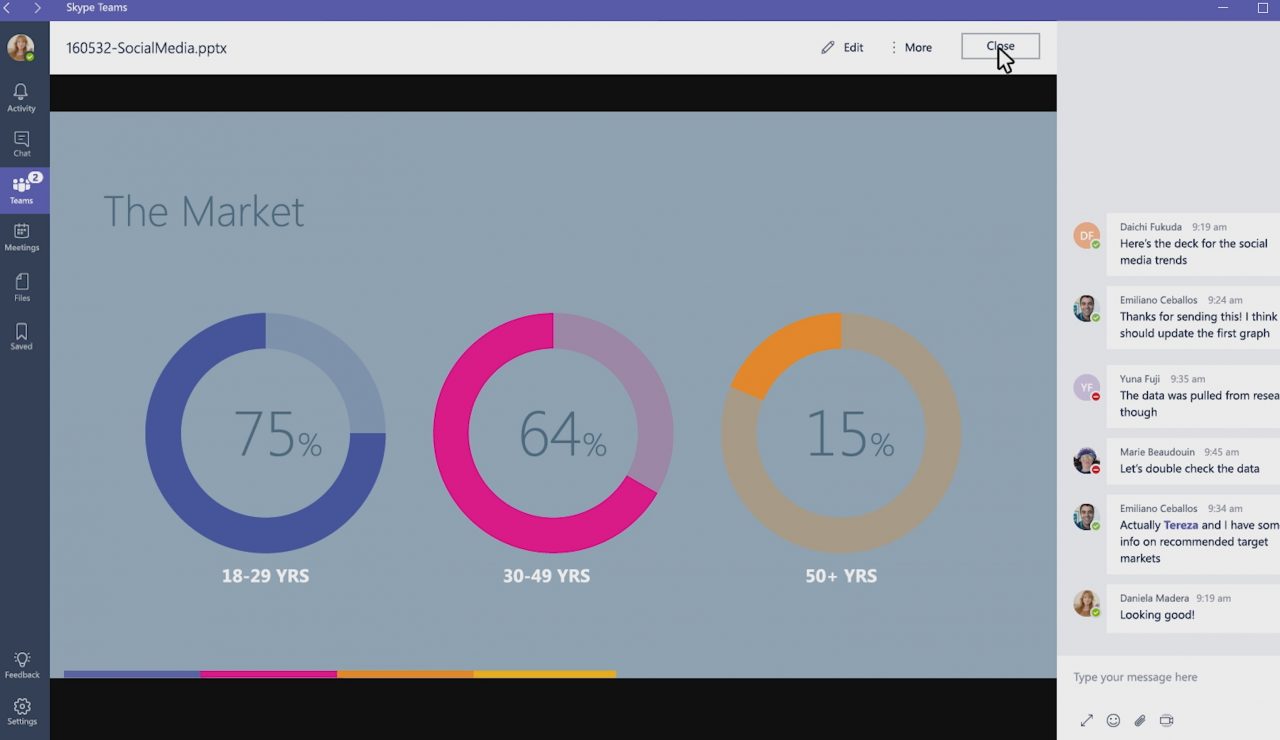 One of the advantages Skype Teams has over competitors is the native integration with Office 365. Your calendar, OneDrive and even SharePoint files can all be accessed and share from inside the application as well.

Microsoft isn’t taking any chances with Skype Teams and knows that they have to compete with Slack at all avenues of collaboration. The company is currently testing the app in private beta as they iron out the last features and fix bugs; notifications aren’t working properly. In the near future, they will expand the beta program with an expected full release sometime early next year as a new feature for users who subscribe to Office 365.