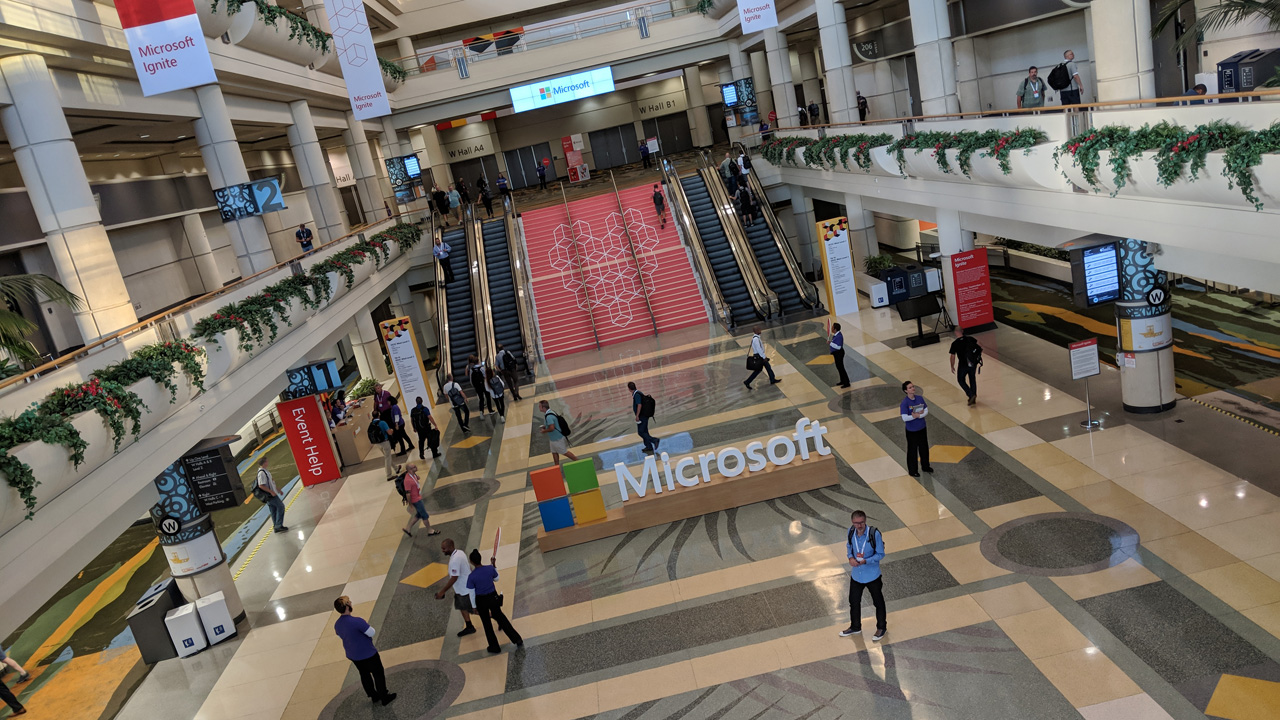 Before the tsunami of people: Microsoft Ignite, early in the morning

Because hazy, hot, and humid doesn’t even begin to explain the weather in Orlando, this edition of Short Takes looks some of the other news that came out of TechEd, er ah, Microsoft Ignite this week.

Unlike Sasquatch, Surface Hub 2 is real

Microsoft kicked off its Ignite conference this week with some bad news buried in a (literal) book of announcements: Its hotly-anticipated Surface Hub 2 collaborative display will basically be delayed until 2020, though a stripped-down version running the current Hub OS will ship in 2019 as first promised. But here’s the thing: We were able to actually use Surface Hub 2—both with the original Hub OS and 2020’s Hub OS 2.0—and it is awesome. The only features we weren’t able to experience first-hand were its incredible tiling capability, where you can attach three of the displays in portrait mode for a truly immersive experience. And video calling; in portrait mode, the person you’re talking to appears life-sized. All-in-all, Microsoft has yanked a victory out of the mouth of defeat here by letting people like Brad and I actually use the device. It’s real, not demo-ware, and that is perhaps the most surprising news of all.

In its next scandal, VW will be found using on-premises technology to make “cloud” connectivity seem faster.

A new release of Microsoft Office is generally a big milestone, but things are bit different now. Now, the version number-branded Office variants (like Office 2016 and the newly-released Office 2019) are not as capable as the cloud-connected versions of the suite you get with an Office 365 subscription. And that means that Office 2019 is not a superset of the version of Office you’re currently using … if you are an Office 365 subscriber. As I was told at Ignite, Office 2019 isn’t just for Luddites: There are customers—on submarines or oil platforms, to use two extreme examples—that simply can’t or won’t connect online regularly or at all. And believe it or not, Office 2019 isn’t the end of the line: Microsoft confirmed that it will ship another on-prem/”perpetual” Office release in the future too.

Way to land that headline, guys.

A year ago, Microsoft was humiliated when Consumer Reports pulled its “recommended” rating on all Surface PCs because of poor reliability reports from its readers. But with Surface Laptop, Surface Pro (2017), and Surface Book 2 providing much better reliability, Consumer Reports is back, and this time they are recommending these newer PCs to consumers. The bad news? Consumer Reports does not recommend Surface Go, Microsoft’s terrible new mini-tablet, because of its poor performance. Which is totally justifiable: I’d add that its laughable battery life is just as much of a problem as well.

“Microsoft and Shell team-up to build AI into gas stations”

For some reason, it keeps recommending the most expensive gas to customers, regardless of vehicle.

And speaking of Surface, Microsoft is widely expected to announce updated Surface PCs–a Surface Laptop 2 and Surface Pro 6 are pretty much guaranteed—next week at an event in New York. Also on tap at the event if the formal launch of the next major version of Windows, called Windows 10 version 1809. (Or sometimes incorrectly called the October 2018 Update; that’s actually the name of the feature update you install to upgrade to Windows 10 version 1809.) As with its predecessor, version 1809 is blissfully free of the nonsense updates that dogged the two creator-themed updates from 2017.

“Where will Microsoft Corporation be in 5 years”

When it comes to my relationship with Skype, I have to check the “it’s complicated” choice. But it’s going to get even more complicated in November when Microsoft finally kills off the more capable classic Skype client for Windows desktop, something it tried to do this past month. But people—including me—complained because it happened too quickly, and because the new Skype 8 client is terrible and doesn’t include many of the features from classic Skype. So Microsoft gave us a few more months, to say our goodbyes. Alas, poor classic Skype, we hardly knew you.

A legit Microsoft employee could get way more than that.