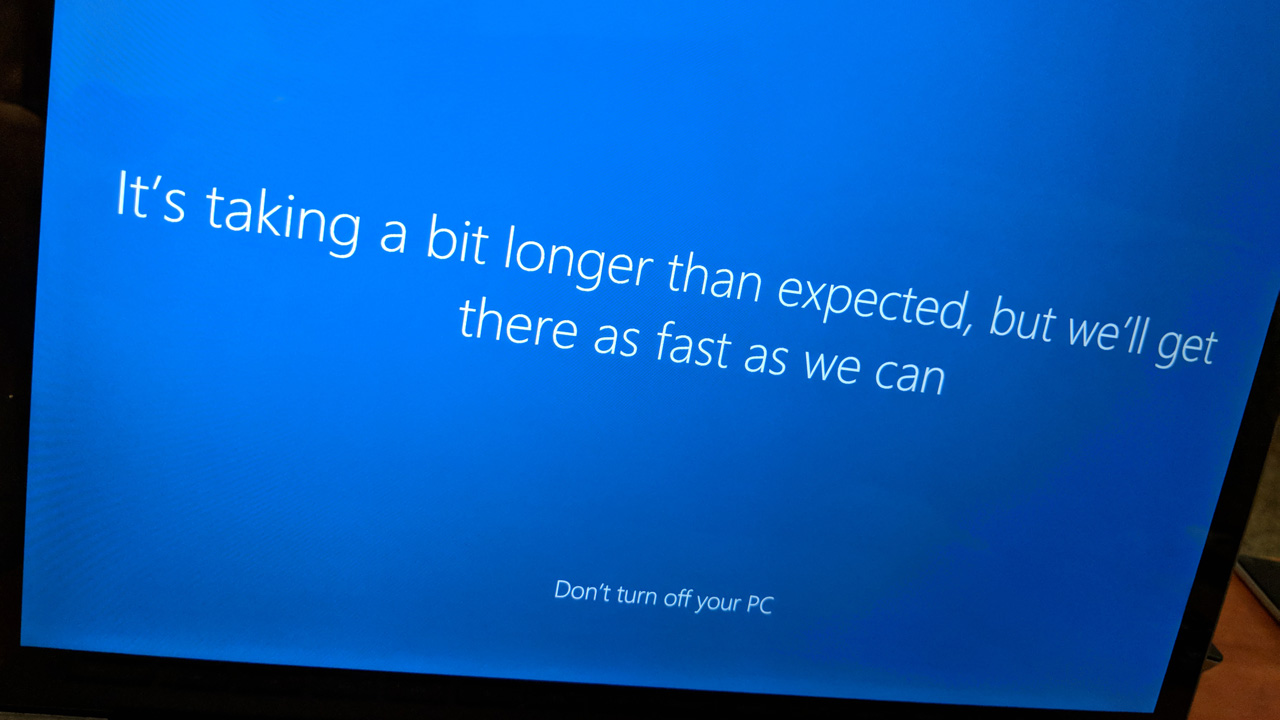 Because March showers bring the Apocalypse, this edition of Short Takes looks at Microsoft helping Intel to ship firmware updates, Microsoft and Google going after Slack, a new boss for Cortana, and so much more.

One of the weird side-issues with Intel needing to patch its CPUs to protect against the Spectre and Meltdown vulnerabilities is that the microprocessor usually doesn’t have a direct relationship with any of its users. So it has to rely on PC makers to ship these updates to their customers, and then hope that those people even pay attention to the often hokey software updaters that the PC makers use. So Microsoft has stepped in, and it is now providing yet another way for PC users to access Intel’s firmware patches. Via Windows Update, right? Right?? Nope: You have to manually download the patches from the Microsoft Update Catalog … and know exactly which version(s) you need. Yes, this is aimed mostly at businesses, but come on. This needs to be immediate and automatic for everyone.

“Could Microsoft be working on a foldable Surface tablet?”

If you don’t know, don’t write a story.

Microsoft Teams gets (somewhat) serious about competing with Slack

While Microsoft Teams is correctly lauded for coming to market as a fairly full-featured product, it has, to date, lacked the one thing that could make it a Slack killer: The ability to use the product without first signing up for an Office 365/Azure AD account. This week, however, that started to change: Microsoft announced plans to let Teams users add non-AAD guest users to their teams. Meaning that, yes, those outside the Microsoft ecosystem can get their first taste of this product. Naturally, it doesn’t go far enough: Where anyone can sign-up for Slack, you have to be invited to get into Teams. And what Microsoft still needs to do is address that little issue. Mr. Nadella, tear down that wall!

Hopefully not with the Chinese coal industry.

Google is also going after Slack because of course it is

Before you get too worried about Microsoft’s inability to close the loop of Slack’s functionality, let’s take a gander at Google. The software giant has released several different chat apps over the past few years and has changed its strategy so many times I can’t even remember them all. But like Microsoft with Teams, it’s trying. And this week, it released something called Hangouts Chat, yet another Google messaging app, and one that is designed, yes, to take on Slack. Hangouts Chat does what you think it does, and of course, the description if full of buzz-phrases like “Uses artificial intelligence to speed up workflows.” Of course it does. But since this is a Google chat app, the one thing we know is that the world is going to ignore it. So they just bought Microsoft Teams some time. Thanks, Google!

“Microsoft to make Ubuntu a first-class guest under Hyper-V”

They can use the front door now.

While I have big problems with the faux accessibility gains in Windows 10—witness the harpy-like shrieking of Cortana in Windows Setup as the obvious example—the firm is making up for it with a truly useful real-world accessibility aid: A new iPhone app called Soundscape provides 3D audio cues so that the blind and vision-impaired can identify real-world landmarks and objects as they go. It’s designed to augment current navigation options like canes and guide dogs, and it seems to provide a much better representation of the real world than was previously possible. Bravo, I say.

Please give me six months to figure out what that means.

Javier Soltero, who was heading Microsoft’s Outlook efforts and had come to the company with Accompli a few year back, has accepted a new job as the corporate vice president of Cortana. And by “new job”, I mean a new job, literally: There was no one else overseeing Cortana directly before, which might explain the horrible mess this product is in. Cortana, as you must know, is on the verge of being the next Windows phone, with low usage, near-zero compatibility with smart speakers, and poorer functionality than popular assistants like Amazon Alexa and Google Assistant. Can Soltero turn it around? He’s a great guy, for sure. But when I look at the 117 different versions of Outlook out in the world today, I see a job that was left unfinished. And I’m not sure anyone can fix Cortana, sorry. This is another case of too little, too late.

The iPhone X notch is terrible, so naturally, the entire Android world is copying it

If there is an Apple design decision worse than the screen notch on the iPhone X, I’m not aware of it. And yet, this week, at Mobile World Congress, about half of the Android device makers announced plans to release phones with this exact same unnecessary display occlusion. Which proves once and for all that no idea is too terrible not to copy. Seriously, it’s time for us to collectively agree to never purchase such a product. And the (lack of a) need for a notch was already solved: Just look at Samsung’s flagships for an example of a perfect small-bezel design with nothing intruding into the screen. We will look back on this and laugh. Ruefully.

The pretended that a tablet was a laptop. Hilarity ensued.