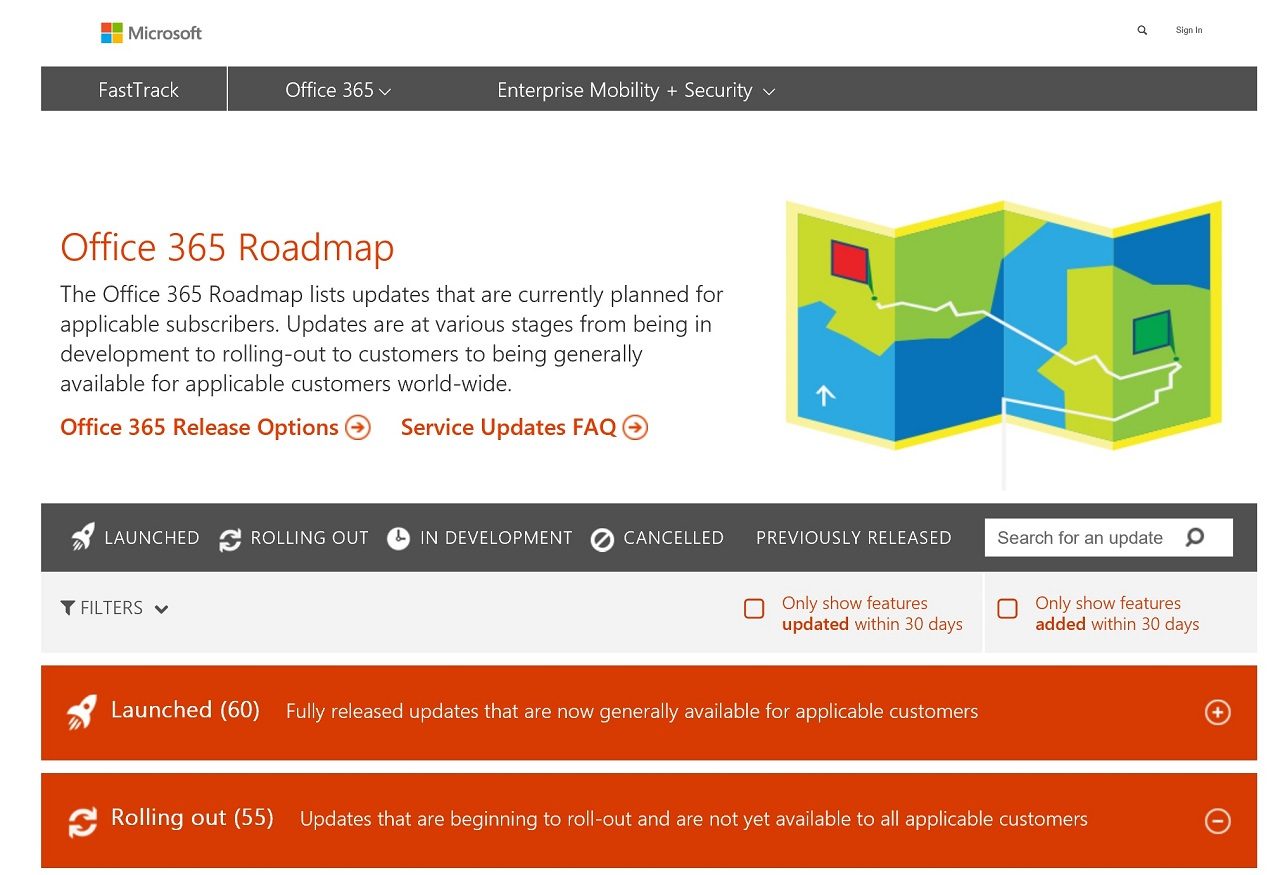 In a contribution posted to the “Change Alerts” group in the Microsoft Technical Community, Brian Levenson, an Office 365 product marketing manager, said that plans were in place to make improvements to the Office 365 roadmap.

A Roadmap to Happiness

The Office 365 roadmap is Microsoft’s public listing of development items in progress for all applications running in the service. It is divided into:

As you’d imagine, given that Office 365 is over five years old now, the last category is the largest. However, at the time of writing, there are some 154 updates in development and 55 rolling out, quantities that underline the work required for tenant administrators to keep abreast of what’s changing inside Office 365.

The Happiness of Roadmap Items

The Roadmap has been around for a couple of years now and it’s an extremely useful tool for tracking change within Office 365. That is, if you understand the text provided by Microsoft to explain each roadmap item. Take the example in Figure 1, which describes the new Files view just launched for Office 365 Groups.

As you’d expect, the text describing the update is upbeat and positive. Change is good. Improvement is coming. All is well in the world. What something like this does not explain is the downside of change and how it might affect the way users work.

But after a while you become used to the happy tone and learn to interpret what’s coming down the line. Configuring some user accounts for First Release is a good idea because you can then match the text against reality and come up with your own description of what’s happening.

Microsoft’s new idea is to assign unique feature identifiers to roadmap items. This doesn’t sound earth-shattering and indeed it is not. However, it is a step forward because no easy way exists today to focus in on a specific update and link it across roadmap, announcement (in blogs.office.com), and the Message Center (Figure 2) in the Office 365 Admin Center (note to self: I should be better at reading these announcements). Using feature identifiers to correlate announcements in the message center with roadmap items is goodness. 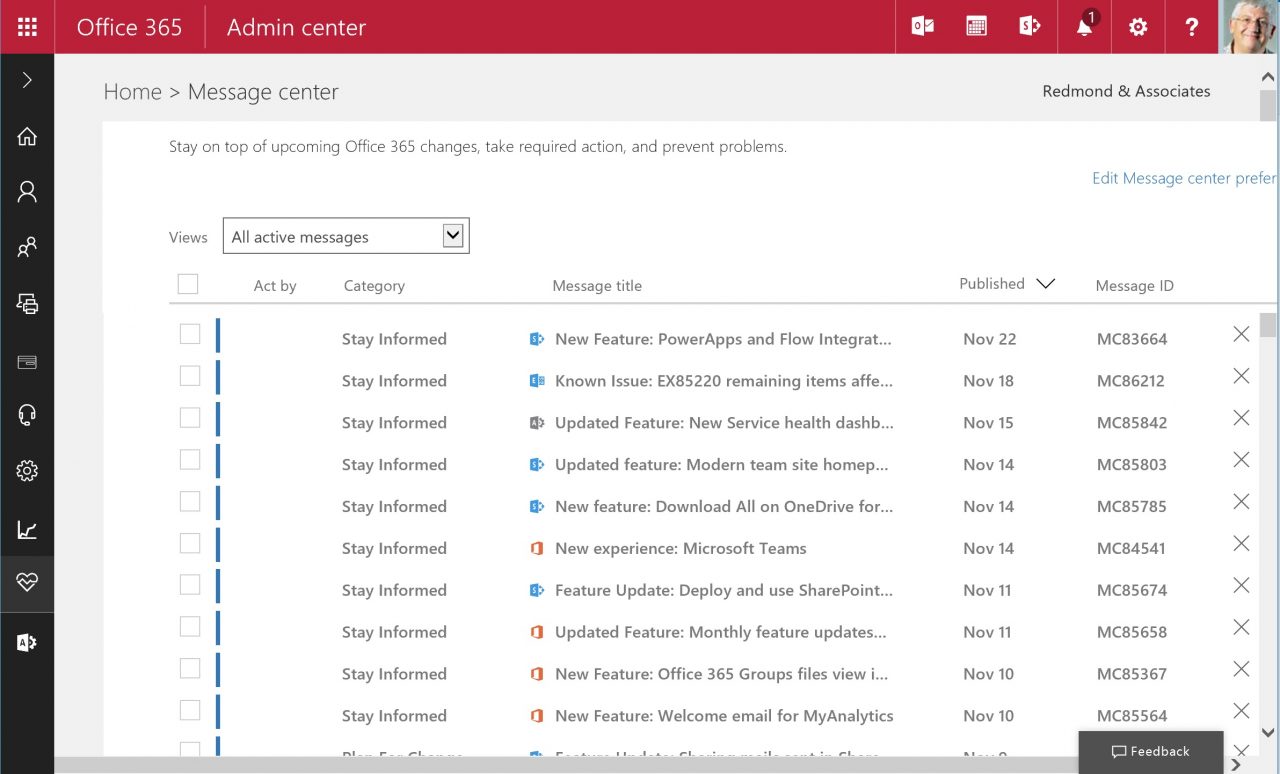 Despite frequent requests, Microsoft will still not provide an RSS feed for the Office 365 Roadmap (an unofficial RSS feed is available).

As part of the transition, Microsoft is moving to use a new database to track features and plans to refresh the web site interface so that it works well on both PCs and mobile devices. Perhaps the database change will be the catalyst to generate an RSS feed. As it often takes some time before new features show up in certain Office 365 plans (including those available for government and education), it would also be useful if Microsoft indicated what features are available in what plans.

The transition is scheduled for early December. At that point, the web site will switch to a new home in products.office.com instead of its current location in the Office 365 FastTrack site. No action is necessary for users as the magic of redirection will point you to the new location.

As anyone who works with Office 365 knows, the devil is very much in the detail when it comes to understand how the service actually works. Over the last few months, I have published weekly “snippets”, or collections of short notes about different aspects of Office 365. However, according to web site traffic, it seems that snippets get less traffic than regular articles. This is possibly because it is harder for search engines to locate content when it’s included in a list of items.

In any case, snippets are no more. I shall no longer bring you news about the darker corners of Office 365, such as why OWA decided that floating icons (Figure 3) were a good idea for an entire day this week.

Nor, for instance, will I be able to ponder why Delve throws up strange results from time to time, including its most recent quirk where “[email protected]” is listed as the author of all my documents (Figure 4). Nor shall I complain about changes such as the decision to remove the “Quick Links” web part from the modern team site home page, which seems to be a weird and backwards step. It’s been a strange week so far. 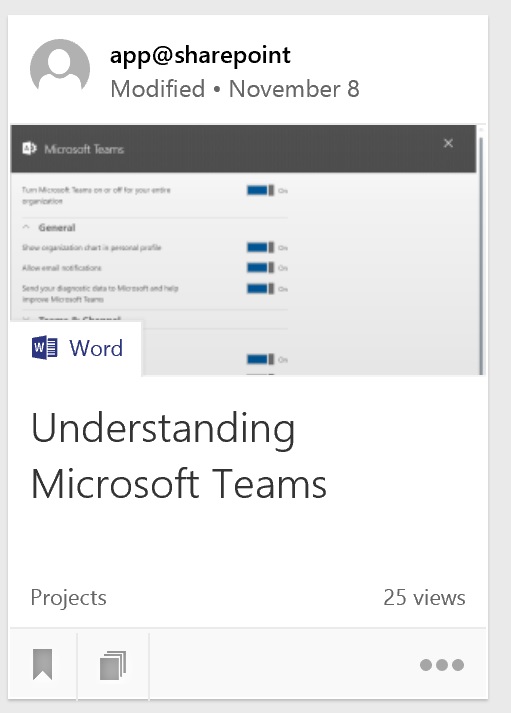 Instead of all this frippery, you’ll see regular, straightforward articles from me about Teams, and how many active users Office 365 has, and the battle between G Suite and Office 365. Or indeed, the majority of this article.

It’s all for the best.