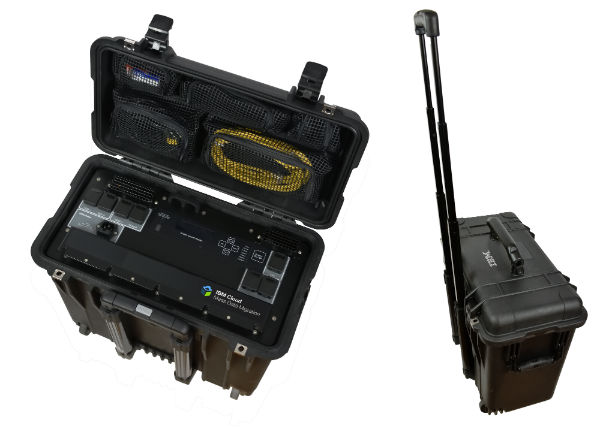 Once all of the desired data has been loaded onto the device, it is then shipped back to IBM, at which point the data is offloaded to IBM Cloud Object Storage, giving the organization access to their data along with the ability to use it across the IBM Cloud Platform.

Following this, the Mass Data Migration portable storage unit is then erased using Department of Defense level guidelines. What’s more is that this entire process can be completed in as little as seven days – something that might take much longer if large amounts of data are uploaded directly to the IBM Cloud Platform via the Internet.

These portable mass storage units are capable of storing up to 120 TB of data at RAID-6, and use AES 256-bit encryption. This can help to ensure the integrity of the data itself, while also keeping it secure – something that is especially important given that the data is being physically shipped.

For those companies that would like to move the cloud, but do not want to move gigabytes, terabytes, or even petabytes of data across a network or Internet connection, this sort of solution can prove beneficial. This is especially true for organizations that may not have a reliable connection to the Internet, such as remote research teams, those that do not wish to put a strain on their network by uploading large amounts of data to IBM’s cloud platform, or those that would simply like to transfer large amounts of data in a cost-effective manner.

An added benefit of transferring data to the IBM Cloud Platform is that, should an organization wish, they can also take advantage of the various services that IBM has to offer, including Watson Content Enrichment which can be used to gain helpful insights by analyzing unstructured data.

IBM Cloud Mass Data Migration is currently available in the United States at the flat rate of $395 per mass storage device (including UPS Next Day Air shipping), with regional and global expansion coming soon to the EU.

While a service like IBM Mass Cloud Data Migration may not be for everyone, it can definitely be useful for those looking a cost-effective way to transfer large amounts of data to the cloud in a safe and secure manner, without having to tie up an organization’s bandwidth. And for those who are working in remote areas or in areas without a reliable connection to the Internet, this type of solution can help to ensure that data finds its way to the cloud in a timely manner.