What Is Notion? A Guide For Beginners 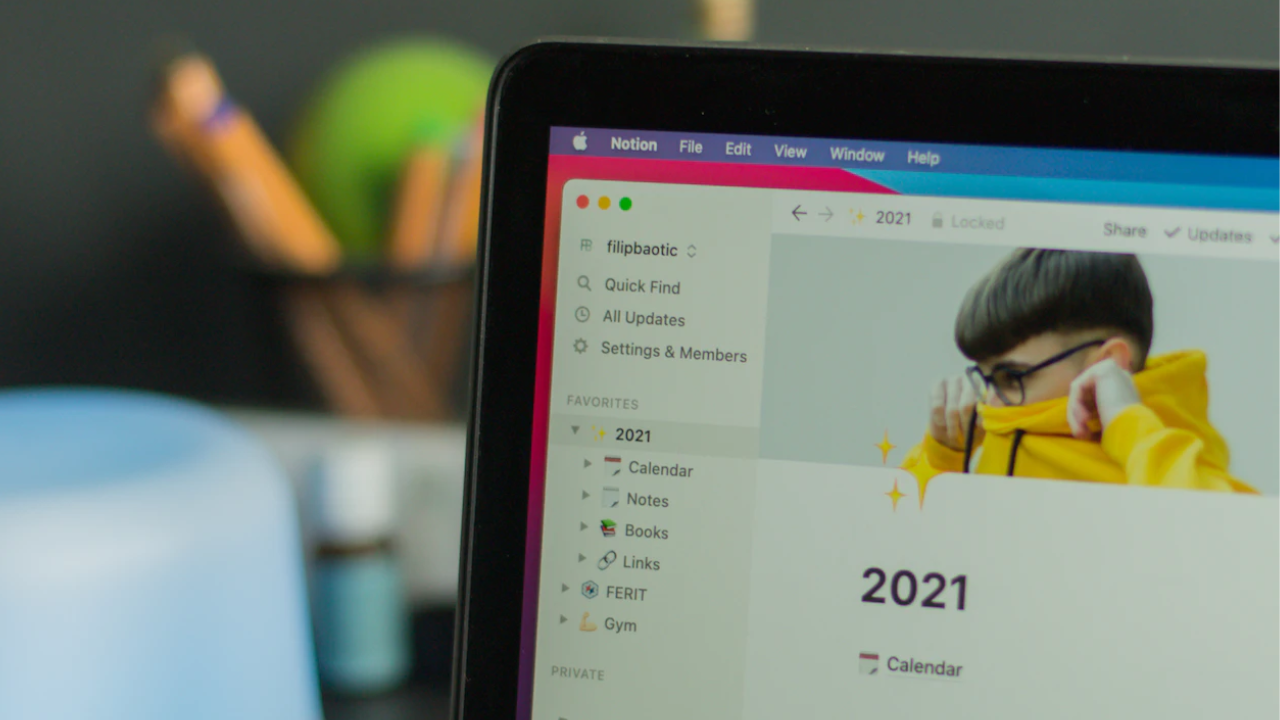 Notion is a cloud-based productivity and collaboration all in-one workspace tool. In this article, I’ll answer the question ‘what is Notion?’ and provide some examples of how it can be used for productivity, real-time collaboration, and project management in your organization.

Notion allows small teams of people to work together in real-time on documents, tasks, notes, wikis, and databases from different devices. For example, you could create a Notion workspace where your team will work on a project. The workspace can be used to store all the documentation related to the project. And team members can update the documents in real-time together.

In addition to being a productivity tool, Notion can be used for project management. For example, you could create a task list, a calendar for important events, a Kanban board to track the status of projects, and databases for work management.

The Notion app competes with other productivity and collaboration platforms. There are many Notion alternatives, like Microsoft 365, Microsoft Teams, Asana, Monday.com, Trello, ClickUp, note-taking app Evernote, and the list goes on. Notion is primarily an app that works in your web browser but there is also a mobile app available for iOS and Android.

One of the key differences between Notion and Microsoft Teams, is that Notion allows you to freely organize to-do lists, databases, calendars, documents, and other components on a single page. This is in contrast to Microsoft 365, where apps like Planner and Lists are siloed from each other. Although that is gradually changing in Microsoft 365 as Loop components are introduced to Outlook and Teams. But more on that later.

How does Notion work?

When you first log in to Notion, it can be hard to know where to start if you don’t understand how the platform is designed to work conceptually. Documents, to-do lists, and other Notion components are organized in workspaces and pages. You can create more than one workspace. In a workspace, you can create one or more pages that contain ‘blocks’.

Each block contains some kind of data or media component. At the simplest level, a block can be a paragraph of text. Or it could be a media item, like an image or uploaded PDF document. There are many different types of components that can constitute a block in Notion. Here are a few key features:

Blocks allow you to format the look and layout of a page and add different types of content.

Unlike Microsoft OneNote, which is completely freeform, blocks in Notion create a more rigid and predictable layout for your notes, documents, and other content.

Workspaces can get complicated quickly. And while they aren’t necessarily that difficult to set up, you can download Notion templates to quickly set up a workspace for your needs. One of the great things about Notion is that there is a large community of users offering templates for a variety of needs. Many of them are available to download for free. Some for a small fee. You can download many templates from the official Notion template gallery.

How to use Notion for documents, wikis, notes, and tasks

As you get started with Notion, you will likely want to begin by using it for project documentation, notes, and tasks. You can either upload pre-existing documentation to Notion as a block, like a Word or PDF document. But to unleash the full power of Notion, add a new page to Notion to create a document that allows you to work in real-time with team members.

Pages can be used to create long documentation, wikis, or short notes. And just like you might do in Google Docs and Microsoft Word, you can add comments and see the version history. You can also add to-do lists.

To add a block to a page, type a forward slash (/) and then the name of the component you want to add or choose one from the list. So, for example, to add a to-do list, add a new block either by pressing ENTER or the plus icon (+) that appears to the top left of an existing block when you hover over it with the mouse, and then type / and to-do. When To-do list appears in the context menu, press ENTER to select it.

This method can be used to add any kind of block to Notion, whether it’s H1 headings, tables, databases, file uploads, images, or any other component.

Just like most competing software, you can @mention a team member to grab their attention to a particular block. And you can add reminders so that you don’t forget about something you need to do in the future.

Each workspace in Notion includes at least one default teamspace for team collaboration. Any pages that are added to a teamspace can be accessed by all workspace team members. You can add more teamspaces to a workspace if you like. And drag and drop pages between workspaces and teamspaces.

The concept of databases in Notion can seem a little daunting at first. The best way to think of a Notion database is like a hybrid spreadsheet/database application. If you are familiar with Microsoft Lists or SharePoint Lists, then you will be able to get started with Notion databases quickly.

While the employee information might have initially been entered using a database in list form, the power to change the way the data is displayed and the ability to query it allows you to easily find the information you are looking for. And unlike spreadsheets, Notion databases are designed to be used for real-time collaboration from the get go.

Another example is a database with information about sessions at a conference. You might change the default view to calendar view so that you can see the sessions by date and time rather than as a list.

Databases can also be used as a project management tool. To-do lists are useful of course as a task management tool. But a more advanced use of Notion is to create a database and then use the Kanban board view. A Kanban board allows you to see that status of a project across a series of steps that are required for completion, much like a product might move around an assembly line in a factory.

Can Notion be used offline?

The Notion desktop app for Mac and Windows does support offline use, but the experience is limited. Before you can work on a page offline, it must be preloaded while you still have an Internet connection. And while in theory, any changes that you make while offline to a page should be synchronized back to your workspace when you come online, Notion often fails to do so. The company is hoping to address this issue in the future.

I have personally also found the Notion mobile app for iOS to be rather slow and clunky. Believe it or not, Microsoft’s mobile apps offer a better experience and performance.

The Notion API lets you pull or push information from other apps and automate tasks in Notion. To create your own automations you’ll need to know how to code. Alternatively, an app you want to integrate with Notion might have a native automation that meets your needs. You could also build Notion automations using Zapier.

Is Notion for free?

Notion has a free plan to get you started. But it is limited to the number of blocks you can create and some features, like adding groups or team members are not available on the free plan.

There are three paid plans:

The Plus Plan, which costs $8 per user/month, brings an unlimited number of blocks and file uploads, 30-day page history, and up to 100 guest users.

The Business Plan is intended for companies that want to connect several teams and tools to Notion. For $15 per user/month, you get everything in the Plus Plan and other features like SAML single sign-on (SSO), private teamspaces, 90-day page history, and up to 250 guest users.

The Enterprise Plan includes everything in Plus and Business. And you’ll get:

You’ll need to contact Notion sales to get a quote for the Enterprise Plan.

While Teams isn’t as flexible as Notion, apps like Microsoft Lists and Planner are easier to use in my opinion. Teams also includes the ability to hold meetings, webinars, and live events without the need for third-party software like Zoom or GoToWebinar, although Teams doesn’t currently offer integration with HubSpot.

As part of a Microsoft 365 subscription, you’ll also get document storage, email, and depending of the plan you choose, access to the Office desktop apps for Windows and Mac. Overall, Microsoft 365 offers a much wider range of solutions than Notion, including endpoint security and management.

In what is a clear challenge to the flexibility Notion provides, Microsoft announced Loop. Microsoft Loop componentizes certain elements of Microsoft 365 apps, like task lists, tables, bulleted lists, etc and allows you to add them to Teams chats and Outlook emails wherever you like and have team members collaborate on them in real-time.

Microsoft will also be releasing Loop as an app in the future. The sneak previews we’ve seen at the time of writing this article suggest that the app will allow you to work with Loop components in a similar way to how blocks can be arranged on Notion pages.

Is Notion the right solution for your business?

The answer is, of course, it depends. If you are starting from scratch with no investment in other productivity and collaboration platforms, then Notion is a popular productivity app that is worth considering. While it is not so easy to set up, once you have it configured for your needs, it is relatively simple to use.

Cost is often a deciding factor. You should carefully evaluate whether Notion meets your current and future needs, will it be accepted by users, and whether it is cost effective for your business, considering that it might require you to add other tools to fulfil all your collaborative needs. Microsoft 365 is a more complete solution but it can be complex to navigate if you don’t have the right skills and experience in-house.

More in Productivity and Collaboration

What Is Notion? A Guide For Beginners