The Rebirth of Yammer Groups

When Microsoft announced that Yammer Groups were going to use Office 365 Groups as an identity and membership service it gave new life to the moribund enterprise social networking platform. Perhaps it even lit new hope that Yammer would drive Microsoft to the leadership in the space promised after its $1.2 billion acquisition in 2012.

Following the acquisition, Microsoft did its best to exploit Yammer by telling all and sundry that it would solve the collaboration needs of all kinds of organizations. To ensure greater awareness of the platform, Microsoft enabled Yammer for all enterprise Office 365 tenants. To encourage use of Yammer, Microsoft also integrated it into applications like Office 365 Video where users share comments on videos through Yammer conversations. At times, it seemed like every second sentence uttered by Microsoft representatives included “Yammer.”

While the Yammer PR campaign droned on, other parts of Office 365 prospered. SharePoint received a new lease of life with the release of modern team sites in 2016 and a new administration center. The Exchange-centric Office 365 Groups debuted in November 2014 and are now used by more than 10 million active users.

Even more competition in the collaboration space appeared with Microsoft Teams. The chat-based application quickly acquired substantial traction with Office 365 tenants. Questions appeared about the future of Yammer, with some commentators concluding that it is now time for Microsoft “to put Yammer out of its misery.”

For all the effort and expense, Yammer seemed to be stuck in a rut and its dedicated fans despaired. All in all, things did not seem to be going well in for Microsoft’s enterprise social network. Fundamental change was necessary.

Although it seemed like other parts of Office 365 have moved faster than Yammer, the reality is that the Yammer team has done a lot of engineering belt-and-braces work under the surface. That work, like the integration with Azure Active Directory, is now bearing fruit.

As a relative novice at Yammer management, it was easy for me to enforce Office 365 identities in my tenant; it was harder to figure out that two Yammer networks existed in the tenant. Fortunately, the Yammer development group quickly pointed out the error of my ways and I was able to merge the offending networks to get to the one required to support Office 365 Groups.

You know when a Yammer group is upgraded because it lists Office 365 resources in the right-hand menu (Figure 1). The links in the menu bring you to the site, document library, shared OneNote notebook, and Planner (if a plan is associated with the group). When a new Yammer group is created, Office 365 provisions a group-enabled SharePoint site for it, just like it does when you create a new Outlook group. 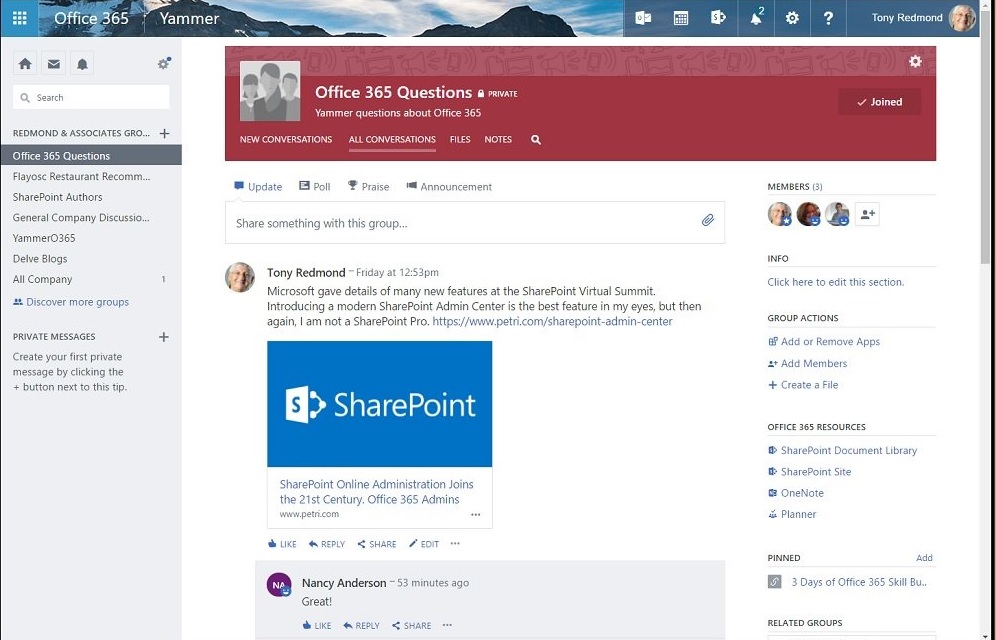 Microsoft plans to deliver more integration between SharePoint and Yammer later this year. In addition, some of the functionality promised when Microsoft announced the integration of Yammer with Office 365 Groups has not yet been delivered. For instance, although a newly-created Yammer group gets an Exchange group mailbox, the integration with the group calendar is still coming.

Because a Yammer group has a group mailbox, you can try to access it with OWA. If you do, you’re told that it is a Yammer group and redirected politely back to Yammer (Figure 2).

Yammer Groups show up like any other Azure Active Directory group in the Azure AD console. You can access these groups using cmdlets like Get-UnifiedGroup, Get-Group, and Get-AzureADGroup.

From a Groups perspective, a Yammer group is like an Outlook group except that a Yammer group stores its conversations in the Yammer store rather than inside an Exchange mailbox. Differences do exist, but only so many ways exist to create and present threaded conversations and Yammer is very good at what it does.

One feature I missed is support for external guest users, which allow individual people outside the tenant to access the group document library. The issue here is that Yammer has its own model for groups that support external members. Those groups support corporate identities, meaning that you cannot add external guest users who have consumer identities from Gmail or Outlook.com.

In any case, I could not find any way to give access to external guest users defined in the tenant Azure Active Directory to the SharePoint group library belonging to a Yammer group. On the other hand, it is easy to involve external users in group discussions via email, much as you can do with Outlook groups.

I suspect that those who favour Yammer will continue to use it while those who like OWA and Outlook will not be tempted to change. With that in mind, there’s no point in comparing the features of a Yammer group with an Outlook group. They both do the job.

Even after a Yammer organization switches over to enforce Office 365 identities, the transition to new-style Yammer groups takes time. Initially, only newly created Yammer groups will use Office 365 Groups and gain access to resources like SharePoint and Planner. If you want to use the new functionality straightaway, you’ll have to create new groups and move members and content over to those groups.

You cannot stop users creating new Yammer groups because the general ethos of Yammer to encourage openness and transparency. Responding to a user voice request to control Yammer group creation, Microsoft said “Allowing everyone to create a group, or write a post, on Yammer are core to our product philosophy that everyone in an org should be empowered to communicate.” The net effect is that Yammer has a split personality in that some users can create groups linked to Office 365 resources and some can create old-style groups. Cue confusion?

Over time, Microsoft say that they will upgrade existing Yammer groups to use Office 365 Groups to complete the transition. The Yammer FAQ says that “backfill” (the process to convert existing groups) “is starting in May [2017]. We will begin connecting existing groups in eligible networks in batches over a few weeks.”

Microsoft will not upgrade backfilled groups unless at least one of the group owners can create new Office 365 Groups by policy. In addition, backfill will only happen for 1:1 networks as Microsoft does not support Yammer with Office 365 Groups in a multi-network configuration.

Much as I like the evolution of Yammer to embrace the Groups service, I see some weaknesses compared to Outlook Groups. First, Yammer does not embrace the Office 365 data governance framework yet (future support is promised), so eDiscovery content searches cannot find information stored in its group discussions. Nor can you use classification labels or apply retention policies to remove or keep content stored in Yammer Groups.

Exchange and SharePoint have good compliance features, largely because their on-premises versions include compliance functionality. Any information stored in those repositories by applications like the files created in SharePoint by Teams come under the scope of retention policies, holds, and the like. Anything “new,” like the core data used by the Teams and Planner services, or applications that have never supported Office 365 compliance features, like Yammer, is invisible for compliance purposes.

Although Microsoft has made some progress in extending data governance to more than SharePoint and Exchange by capturing Teams chats for compliance purposes, Yammer is still a compliance outlier. To solve the problem, Microsoft will probably have to include Yammer conversations in the content indexes created by the Search Foundation as those indexes are critical to the way that compliance works across Exchange, SharePoint, and OneDrive for Business. Such an approach would also make Yammer content available to Delve.

The second issue, again shared by Teams and Planner, is lack of PowerShell support for Yammer. Microsoft points to the Azure Active Directory module and the Office 365 Groups cmdlets included in the Exchange Online module as evidence that PowerShell is supported, but it’s not. You can certainly work with the properties of Yammer Groups through the Office 365 Groups cmdlets to change display names, email addresses, classifications, and update group membership.

For example, if you add a new member using Add-UnifiedGroupLinks, the new member sometimes does not show up in the Yammer membership list when the object exists in Exchange Online and Azure Active Directory. Microsoft’s advice is to wait for synchronization to occur but some changes have never appeared in some of my groups. Perhaps the best advice for now is that if you plan to use Yammer Groups, you should manage their membership through Yammer.

I experimented with the recovery of deleted groups, a feature recently introduced by Microsoft for Office 365 Groups. I can report that the recovery of Yammer groups works (you can see the steps in Figure 3), apart from the membership. I deleted and recovered several groups and in no instance was the membership restored properly. Again, this might be a case of assuming that everything that works with other types of Office 365 Group works for Yammer.

Some of the cmdlets developed for Office 365 Groups work with Yammer groups. However, you cannot do simple things like being able to find out which Office 365 Groups use Exchange to store conversations and which use Yammer. In addition, you can’t interrogate group properties to find out whether a group has an associated team or plan. These are small but important points that stop PowerShell being as useful as it could be in terms of filling in all the places where Microsoft’s out-of-the-box administration fails.

Yammer is making progress and the upgrade to use the Office 365 Groups service is a nice step forward. Recent announcements show that Microsoft continues to invest to integrate Yammer with other parts of the Office 365 suite and to exploit Office 365 Connectors. All good stuff!

I think Yammer still has a role to play within the somewhat confusing range of collaboration technologies that now exist within Office 365, especially for large-scale collaboration across thousands of users when the other types of groups hit scalability limits. Better integration with the other parts of Office 365 help make the case for Yammer, even if sometimes you wonder whether this technology’s best time has passed.