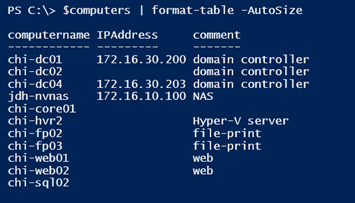 In today’s PowerShell Problem Solver, we’ll wrap up a series of articles that began with a simple request to update a CSV file of computer information with IP addresses.

As I mentioned at the end of the last article, using Test-Connection to resolve a computer name to IP may not always be an option. So instead of asking the computer for its IP address, we’ll ask DNS. I’m going to use the same CSV file of unrevised computer information.

The goal is to get the missing IP addresses so that I can eventually export the data back to a CSV file. If you are running Windows 8.1 or later, then you should have the DNSClient module. Within that module is a cmdlet called Resolve-DnsName, which is very easy to use.

I’m going to assume you will take a few minutes to read cmdlet help for Resolve-DnsName. I did, and I can use it to find the address for CHI-DC02.