If you have used the PowerShell Get-Eventlog cmdlet to display event logs, then you have probably been a little frustrated. You’ll run a command like this:

But the default display is hardly helpful.

You’ll notice that the message property is truncated, and it’s probably the thing you want to see most when using the get-eventlog cmdlet. You can get around this by specifically telling PowerShell to format the display as a list. 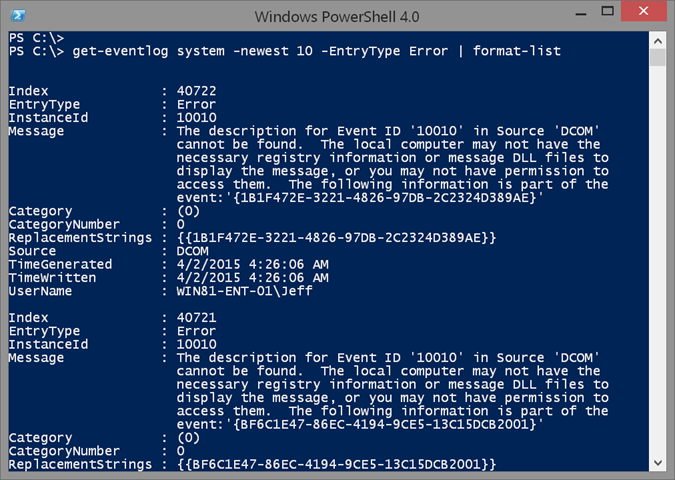 Now you have to remember to always use format-list or come up with a custom command to display the properties the way you want. This is a case where PowerShell isn’t making things easier for the IT pro. In fact, a suggestion was made to Microsoft about this very situation. The default display for Get-Eventlog should be a list and not a table. Fortunately, we don’t have to wait for Microsoft to make that change.
Most common object types, like what we get from Get-Eventlog, have defined views. That is, when you run Get-Eventlog, at the end of the pipeline PowerShell looks at the objects and then determines how to best display them. It accomplishes this by looking at a set of rules stored in .ps1xml files. PowerShell is flexible enough to allow you to rewrite those rules and that’s what we are going to do.
First, we need to know what type of object we’re dealing with. I’ll get a single object as a reference and pipe it to Get-Member.

Grabbing an object and piping it to get-member in Windows PowerShell. (Image Credit: Jeff Hicks)

The typename tells me what I need to know. In this case, I can ignore everything after the # symbol. When you run Get-Eventlog, PowerShell looks in its files for instructions on how to display a System.Diagnostics.EventLogEntry object. In this particular case, these rules are stored in $pshome\DotNetTypes.format.ps1xml. If you want, you can carefully open the file in Notepad or the PowerShell ISE, and search for the object type.

You’ll see entries for a Table and a List. Because the Table is listed first, it becomes the default. But don’t change anything in the file. It is digitally signed by Microsoft and any changes you make could be overwritten. Instead, you can create your own set of rules via a custom .ps1xml file. Instead of having you copy and paste, let’s work on this from PowerShell. If you opened the dotnetypes file, close it without saving any changes.
We can see the same information in PowerShell with the Get-FormatData cmdlet.

The new file is an XML document, so I can manipulate it from PowerShell.

Now there are three entries.

The last one can now be deleted.

Now I have what I want.

All that remains is to write the changes back to the file.