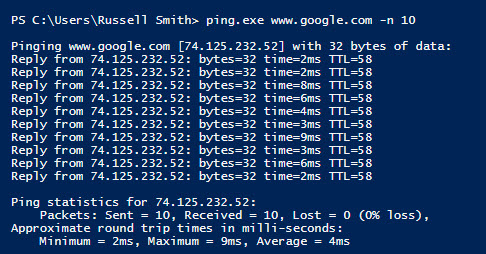 The ability to parse complex text files is one of PowerShell’s many strengths, but using the SubString() method and regular expressions can involve writing a lot of code to get the desired results. PowerShell 5.0’s ConvertFrom-String cmdlet has two modes that can be used to parse text: Basic Delimited Parsing, and Auto-Generated Example-Driven Parsing.

Delimited parsing uses a character, such as a space or semicolon, to determine where data stops and starts:

Auto-Generated Example-Driven Parsing makes it easy to parse more complex text files by supplying PowerShell with a template of how the data usually looks. For instance, the output of a ping command can be parsed by giving an example, in the form of a template, of how the output looks. From the template, PowerShell learns how to parse the ping command’s output using FlashExtract, a machine learning tool developed by Microsoft Research, which is also used in Excel’s FlashFill and FlashConvert commands for automatically creating regular expression extraction tools from samples of highlighted data.

Let’s attempt to parse the output of a typical ping command. The –n parameter in the ping command below specifies the number of echoes to return.

In the template above, I’ve used an asterisk to indicate the start of a new data sequence.  The actual data that I want to parse from the text is wrapped in curly brackets. I’ve also added variable names Bytes, Time, and Ttl to the template, but it’s not strictly necessary to add these names. If I wanted to make the variable name of one of the fields something different than from what’s in the output of the ping command, then they must be included.

If I wanted to use latency instead of time as a variable name, then the template would look like this:

Now if we run the ping command again and pipe the output to ConvertFrom-String, hopefully we’ve provided a good enough example in the template that PowerShell will be able to parse the output correctly: