There’s lots to hear and learn about relating to Office 365 at the Microsoft Ignite conference in Atlanta this week. All of the product groups are putting their best face forward to impress and amaze customers with what has happened or what will happen inside the service. Here’s some of what I have been hearing.

Delve has always been pretty good at displaying information about co-workers when you navigate through its people view. SharePoint Online, OneDrive for Business, and OWA have borrowed some of the idea to display a nice summary of a person, including their position in the organization structure and recent documents that they have worked on (as shown in Figure 1). The information about documents is constrained to the site (Delve takes a wider perspective across all sites), but the new People Card is a nice touch. And detail matters. 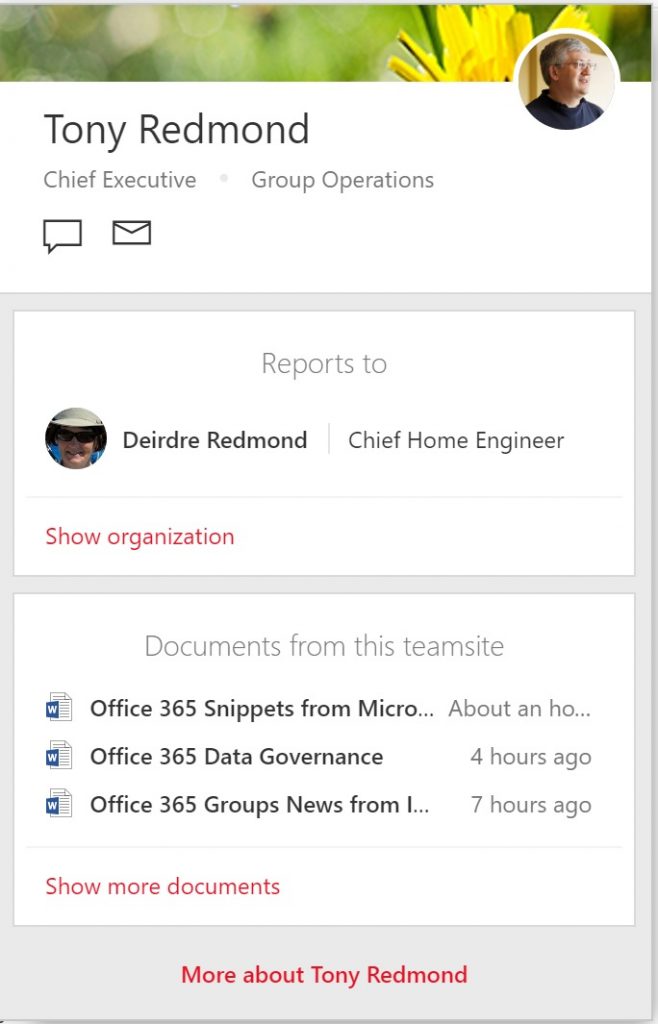 Unfortunately, as can happen when new technology is introduced, some glitches have appeared. One glitch is being discussed in the Microsoft Technical Community.

Cogmotive, the London-based specialist in Office 365 reporting, launched a new “Discover and Audit” module at Ignite to help tenants make sense of the Office 365 audit log. As anyone who has ever reviewed audit events from a busy tenant knows, the audit log is a mass of data and it’s very easy to overlook the important or anomalous events that lurk within. Microsoft’s Advanced Security Management (ASM) tool does the same. ASM is part of the E5 plan or is available for $36 per user per year as an add-on. Cogmotive’s tool lacks the bells-and-whistles machine learning promised by Microsoft, but is much cheaper at $3 per user per year (initial offer).

Before you can use the Office 365 audit log, you have to enable audit logging. I don’t know why this is not the default option, but in any case, it’s a one-time operation that starts the gathering of audit events from the various Office 365 workloads. After a day or so, data should be gathered from all quarters and be available for analysis through the out-of-the-box Office 365 Activity Report, ASM, or a third-party tool.

In addition to enabling audit logging, you should enable mailbox auditing for every user mailbox to ensure that any suspicious interaction with mailboxes is detected. This is easily done with PowerShell, but again it’s odd that mailbox auditing is not enabled by default for all Exchange Online mailboxes. Unfortunately, you’ll have to enable this option for new mailboxes after creation, too. Here’s a command to enable audit logging for all user and shared mailboxes.

Cogmotive, who also announced at Ignite that it is in the process of being acquired by Quadrotech, offers free basic Office 365 reports (which are much more capable than those available in the Office 365 Admin Center) for tenants with fewer than 50 seats. You can’t argue with that price, and I suspect that the cheaper cost of the Cogmotive Discover and Audit module will also prompt some Office 365 customers to pay more attention to what’s happening inside their tenant.

Microsoft announced in December 2015 that Outlook (or rather Exchange) would begin to scan for events in email and automatically populate the calendar with information for events, such as flight bookings and parcel delivery. The feature depends on being able to interpret the messages sent by airlines and parcel delivery companies, so it’s limited to a small set today. Don’t expect events for flights on the likes of RyanAir, Wow Air, or Fiji Airways to show up in your calendar. At least, not yet.

Applying automation to help people make sense of increasing volumes of email makes sense. That is, until you consider the difficulties of telling thousands of users why events have suddenly begun to appear in their calendars without any warning. Preparing people for change can be difficult, which is why administrative control over new features is so important.

Microsoft recently flipped the bit and the code for “create events from notifications” started to roll out to tenants, albeit later than expected. The feature is automatically enabled for all mailboxes and if you don’t want users to see these events until after some communications and preparation, you can disable the automatic creation of events from email by running the Set-MailboxCalendarConfiguration cmdlet. For example, use the following to disable event creation for a single user:

And use the following to disable event creation for all user mailboxes:

Unfortunately, the feature will be enabled for new mailboxes, so you’ll have to remember to disable it for those mailboxes as they are created. Or just let new users discover the feature themselves.

Boos and Hurrahs from the Exchange Crowd

I chaired an Ignite panel session composed of Exchange engineers and MVPs on Tuesday. Among the questions from the floor was an impassionate plea for more on-premises content on the Ignite agenda that received a resounding round of applause. It’s a reasonable request. As you’d expect, Microsoft attempts to create as much buzz as it can around new products and functionality, but the folks who pay $2,220 for a conference pass and are focused on extracting maximum value from on-premises technology need more than “Mobile First, Cloud First” mantra.

On a positive note, the Exchange community celebrated the 20th anniversary of the product’s introduction in 1996 at a very nice party in Atlanta. It was great to meet up with so many of the people who have contributed to making Exchange the world’s leading email server.

The Exchange group posted a tongue-in-cheek video poking gentle fun at themselves about features that are no longer in the product. Stuff like the M drive (horrible) and the Exchange 2000 Conferencing Server (worse). One that might not deserve to be on the list is the original Exchange Client (or viewer), later replaced by Outlook. That client once existed in DOS form! And Public Folders are still with us, despite many attempts to eradicate the blighters. The video will bring a smile to those who remember how enthusiastically Microsoft pushed the features in their heyday.

Metalogix Tries to Do It All

Metalogix is another company that made its name in the SharePoint ecosystem. At Ignite, it announced a new initiative called Content.Ly that’s designed to enable management of data held in the various storage platforms used by businesses. The idea is to have a single platform that extends across Office 365, Slack, SalesForce, Box, Dropbox, and Google for Work (aka Google Apps). The solution should allow a single management regime to be applied all supported platforms. It’s a bold idea and it will be interesting to see how it develops.

I chatted for a while with some companies who use Delve Analytics (now MyAnalytics) and was interested to learn that they have achieved significant success by taking simple steps to improve the effectiveness of user work habits. During a compelling session about MyAnalytics, Bill Diekmann of Cupertino Electric explained how the acquisition and analysis of user time helped the company to recover time from inefficient habits. Analysis showed that some members of the IT department spent up to 60 percent of work time in meetings.

Once Cupertino Electric saw the data on how much time was being consumed by meetings, it immediately created a rule to make 30 minutes the default length for all internal meetings. Apparently, it has seen this simple step release four to five hours of focus time (on average) to users for more productive activities. Sounds good and a great example of how intelligent use of information can help companies to become more efficient. And on a personal level, I consider the chance to lose four hours of meetings each week tremendously liberating.

Another story I heard is that a large multinational company has a rule whereby all recurring meetings are deleted on a certain date every year. This forces people to consider whether the meeting is needed. If it is, the meeting is rescheduled. It might sound like a lot of bother, but this tactic reduces the time spent in recurring meetings by 30 percent. Simple steps such as trimming meeting length or eliminating unwanted meetings can truly generate significant results.