Microsoft Gets Excited About Third-Party Extensions for Teams

All to Play for Between Microsoft Teams and Slack

There is no doubt that Microsoft is in a bitter war with Slack to win the hearts and minds of both users and developers. The announcement of Teams in November delivered a cold blast to Slack, especially as Microsoft made Teams available at no-cost to all Office 365 business customers. After all, why would anyone pay more to use a different chat application?

As it turns out, customers do opt for Slack if they find that a third-party developer uses the Slack platform to provide functionality that makes sense to their business. It is therefore unsurprising that Microsoft wants to make it easy for developers to integrate their products with Teams. The Teams Developer Preview launched in November to support third-party integrations. Microsoft has now enhanced the features available to developers in two ways.

First, developers can now create Bots to do more than have a 1:1 chat with a user. Built with the Bot Framework (which curiously lists “Text/SMS, Skype, Slack, Facebook Messenger, and other popular services” but not Teams as target platforms), the sample T-Bot included in Teams answers questions about Teams – like “how does a channel work?” Essentially, you type a question and T-Bot searches help files to locate potential answers. It is functional rather than exciting.

Now, developers can move away from 1:1 chats and create bots that users can invoke in any channel (conversations or chats) to create new threads or answer existing threads. The idea is that by making bots available in all channels, users will engage with them more. All is explained in the Getting Started with Bots documentation (a thrilling read).

Tabs allow developers to make their applications available to Teams users in the same way that the base product supports access to Files (SharePoint document library), Notes (OneNote), Conversations (chats), and individual Office files. The idea is that users do not have to leave Teams to interact with an application. Up to now, Tabs are functional entry points for applications. Microsoft is now letting developers create “deep links” to reference a specific item within a tab.

As explained in the documentation, a deep link is a complicated URL that points to an item within a tab (application). A user can copy a deep link and include it in a thread. Other user can then click the link to go direct to the item instead of having to navigate through the application to find some specific information.

It is up to developers to decide whether to support deep links. For some applications, deep links make sense. For others, they will not.

In other news about Teams, Microsoft issued a notification to Office 365 tenants (Figure 1) on February 14 to say that soon Microsoft will enable Teams by default for all business tenants. In other words, if you chose to disable Teams in the past, you need to make plans to handle Teams after Microsoft enables the application. 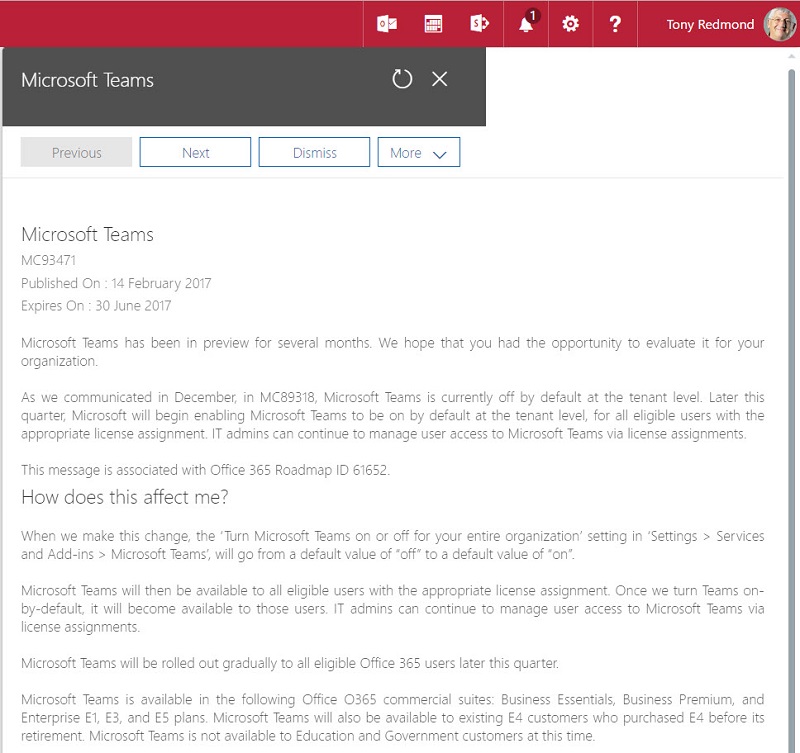 The announcement is in line with normal practice as Office 365 applications move out of preview and into general availability.

Microsoft recently updated license assignment so that you can disable Teams selectively on a user-by-user basis. To do this, select a user in the Office 365 Admin Center, edit the assigned product licenses, and expand details to view the individual applications that you can control. To disable access to Teams, move the slider from On to Off (Figure 2) and save the setting. 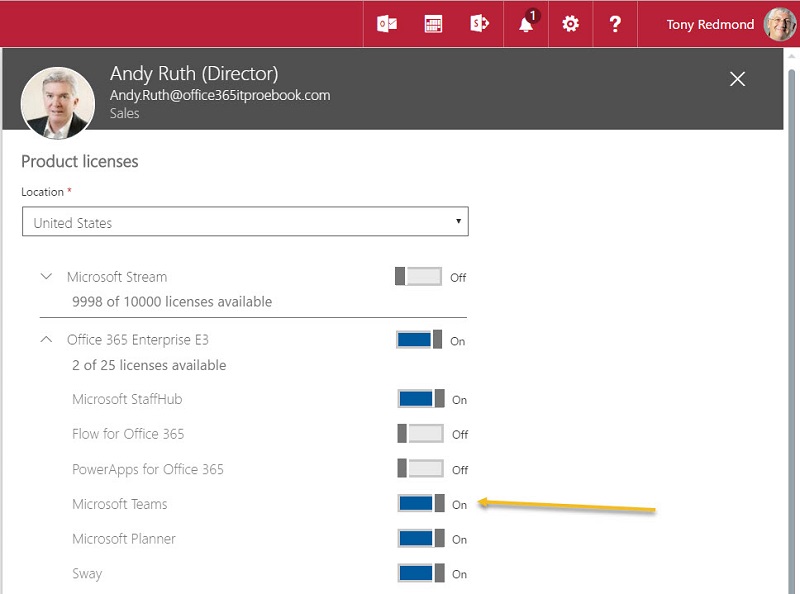 If you can find the users that you do not want to have access to Teams (for instance, everyone in a certain country or department, or perhaps everyone whose surname begins with “R”), you can write a script to create a collection of accounts with the Get-MsolUser cmdlet. After that, it is a mere matter of programming to cycle through the set of objects and use the Set-MsolUserLicense cmdlet to remove the “TEAMS1” plan from the plans available to each account.

Teams seems to be rapidly moving towards General Availability. Despite some challenges in terms of compliance and other matters, Microsoft is making progress to ensure that the functionality available in Teams is useful to users and that developers find Teams a rich platform to exploit. Some will consider Teams an excellent choice for collaboration; others will look elsewhere. Office 365 offers Groups and Yammer as options. It’s nice to have the choice.