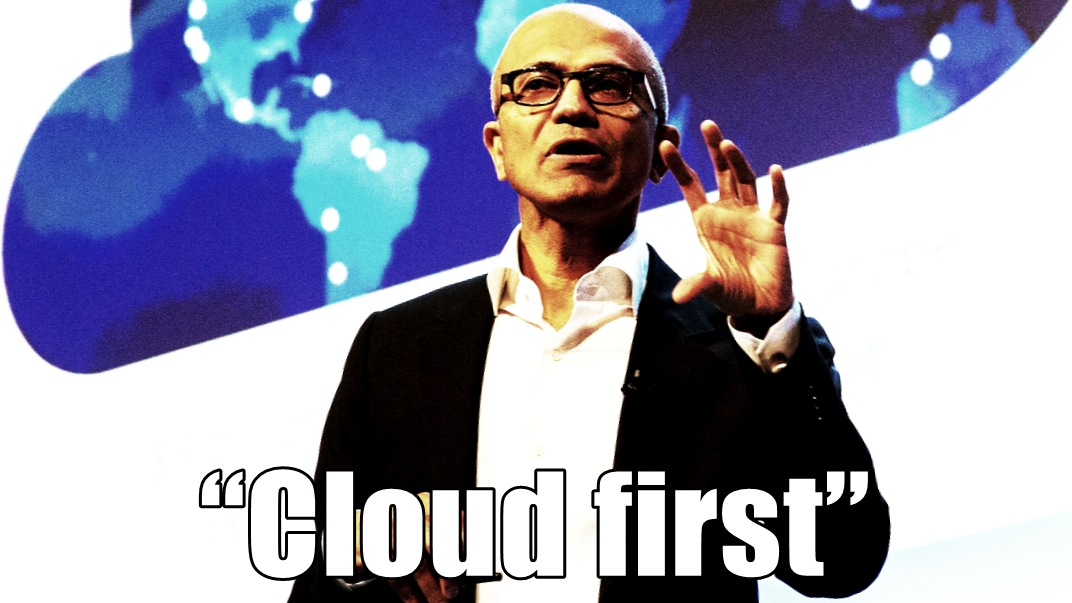 Microsoft CEO Satya Nadella is talking up the company’s cloud chops in artificial intelligence. Azure and Office 365 are chock-full of machine-learning features, he says.

Over the past few days, he’s appeared on stage in Dublin and London, preaching the gospel of AI and FPGAs. And now Microsoft’s donated Azure credits to a UK research consortium that specializes in data science.

But what does it all mean? In today’s IT Newspro, we learn deep.

Your humble newswatcher curated these news nuggets for your entertainment. Not to mention: Why 30 fps is actually 29.97…

What’s the story? Dan Worth says Satya urges all firms to consider their digital future:

Nadella said at an event in London on Thursday [that] the Azure platform is…fundamental to the future. … “Every customer is not just thinking about building or deploying one digital system. They themselves are digital companies.”
…
Nadella also repeated his oft-discussed ‘cloud first, mobile first’ ethos. … “When I talk about mobile first…I mean mobility of the human experience. … If one thing is clear it’s that we will have more computers in our lives in the future, not [fewer]. So the really pressing question is how the experience we have with these computers is going to take place.”

What else did he have to say? Here’s Matthew Finnegan, with Nadella points to machine learning as key battleground for cloud:

It is an area that is fast becoming the battleground for the big cloud providers. … Speaking at an event in London’s Canary Wharf financial district, Nadella [emphasized] the role of machine learning…in Azure…Dynamics and Office 365.
…
“Whenever you think about the infrastructure…you are always driven by the applications of the future.…What is going to be the core currency of the applications of the future? … It is going to be data and…the ability to reason over data to create intelligence. … And so we are building out our infrastructure to support that.”
…
Nadella…focused on how cloud, and…artificial intelligence will support the next wave of innovation for businesses. … It will be interesting to see the results as…businesses get to grips with the possibilities of machine learning.

[It] will see developers “fuse intelligence into everything they’re doing.” … Democratizing AI as Nadella calls it.
…
At the event…The Alan Turing Institute, a UK-based data-science research group, demonstrated what was possible. … Its computer vision system…can take a 2D video of a person speaking and transform them into a lip-synced 3D model in real-time. … Other work at the institute includes creating an automatic statistician using Bayesian statistics…and developing algorithms to recognize human actions from motion.
…
Every compute node of Azure…has FPGAs (Field Programmable Gate Arrays), which he said means developers can write neural network code…and “run it at the speed of silicon” — repeating his description of Azure as “the world’s first AI supercomputer.”

This is not a test. Microsoft’s Kenji Takeda is “excited”—Microsoft accelerates data science at The Alan Turing Institute:

The Turing is the UK’s national center for data science…a joint venture founded by [five] universities…and the UK Engineering and Physical Sciences Research Council. … Microsoft is excited to be empowering [the] Institute to achieve more by awarding $5 million in Microsoft Azure…credits.

The thinking is that the…credit will allow the researchers to use [Azure for] activities such as data analytics, natural language processing, machine learning and data visualisation [spanning] financial services, mathematics, right through to engineering and smart cities. … The Alan Turing Institute is joint venture founded last year on the back of the [government] vow to make the UK the “technology centre of Europe”. The Institute is made up of more than 100 researchers.

Yes, but what’s it for? Alexander Sword parries and thrusts: [You’re fired -Ed.]

The Institute has four main missions: to establish the research foundations for data science, to translate this research into practical impacts, training future data scientists, and leading the public conversation on data science. … Microsoft’s donation of the services was announced by…Professor Andrew Blake, Director of the Alan Turing Institute…and Microsoft CEO Satya Nadella at the Transform conference in London. … Nadella [was] supported by a range of speakers including Ben Medlock, co-founder and CTO at SwiftKey.

What else did the good Professor have to say? Adam Shepherd guides the narrative on:

The Institute is entirely cloud-powered. “There’s something of the startup about us,” said [Prof.] Blake. “We don’t have a big machine room; we wanted to get up and running very quickly. … Azure cloud services will [let] our data scientists…prototype ideas with a fast turnaround of results,” Blake added.
…
“The Alan Turing Institute is a unique place where researchers…come together to push the boundaries of data science,” corporate vice president of Microsoft Research Jeannette M. Wing added. … This partnership with the Alan Turing Institute is a prime example of how Microsoft is investing in the global data-science research ecosystem.

Bonus: Behind the scenes