Gartner, the eponymous consulting group famed for inventing devices such as the “magic quadrant” to explain the leading products in different areas of technology, issued a SWOT analysis about Office 365 on June 20. The summary of the report is a little odd, saying “Technology business unit leaders can use this report to determine how to help with migration or poach them before settling in with O365.” Hmmm… poach what exactly? In any case, the text makes interesting reading.

Like any consulting report, there are statements that I disagree with and facts that I would argue (for instance, Microsoft launched Delve in 2015, not 2016 and the NextGen Portals lauded by Microsoft at the 2015 Ignite conference have never appeared). But given that Office 365 is a moving target, it is difficult for any written work to be 100% correct when viewed through the lens of today. With that in mind, let’s look at some of the report highlights.

A SWOT analysis examines the strengths, weaknesses, opportunities, and threats for something. Gartner’s’ SWOT for Office 365 (Figure 1) is a reasonable take on what’s happening in the market. 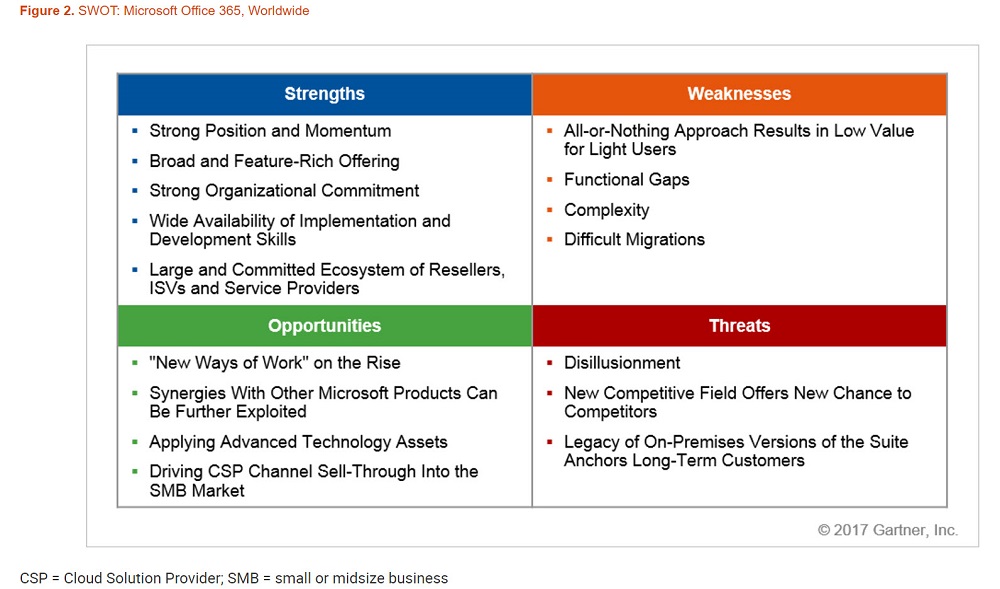 Gartner says that “independent software vendors (ISVs) and service providers that want to play along can invest in Office 365 with confidence that its position, Microsoft’s commitment to innovation and its broad set of features will yield a thriving market for years to come.” This is debatable. Some ISVs would say that Office 365 is a much harder ecosystem in which to find opportunity.

Microsoft does leave gaps in functionality in Office 365, but Microsoft also exerts so much more control inside Office 365 than exists in the on-premises market. What is true is that new gaps are emerging and while ISVs find it hard to sell old products (warmed-over versions of what they sell on-premises – many backup products are in this category), those who embrace change and take advantages of new technology like the Microsoft Graph should prosper.

The observation is that “Such a large suite — much of which was developed as separate, on-premises products — will not be best of breed for every component and will be challenging for users and administrators to use” is probably a little unfair to Microsoft. In 2011 or even 2015, strong on-premises roots shone through in many places in Office 365.

Now, things have moved on and engineering groups are developing new applications that only exist inside Office 365 to take advantage of unique capabilities like the Microsoft Graph. It is also true that Microsoft is pushing out new administrative interfaces, like the data governance framework and Office 365 auditing in the Security and Compliance Center designed to work across Office 365. The recently-launched Power BI Adoption pack for Office 365 is another example of an effort across the entire service. And of course, SharePoint has a new Admin Center.

Another place where the report seems to be dated is when it cites a January 2016 Gartner survey of customers to discover their future plans for Office 365 (Figure 2). Unsurprisingly at the time, Exchange Online tops the chart with OneDrive for Business, SharePoint Online, and Skype for Business behind. I agree that this is a reasonable representation of what was hot in January 2016, but I’m not so sure now. 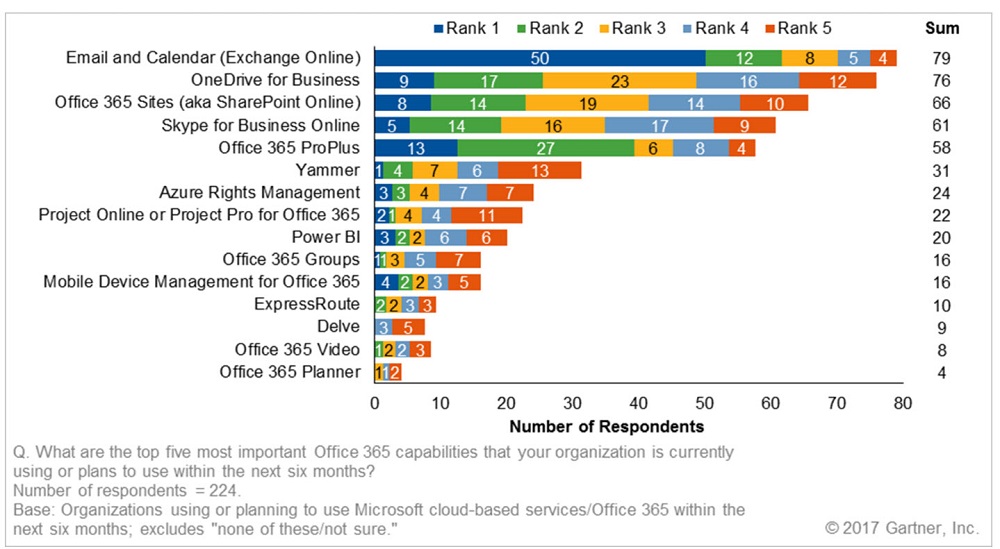 Figure 2: January 2016 survey of what Gartner clients plan to do with Office 365 (image credit: Gartner)

Of course, Teams does not feature in the list at all and I think Office 365 Groups would be higher now than the low position it occupies in this survey, especially given Microsoft’s efforts to convince tenants to use Groups and the way that other applications like Stream and Yammer now use Groups as a membership service. Speaking of Yammer, despite its embrace of Office 365 Groups, I think it would swap position in the chart with Office 365 Groups.

Interestingly, Gartner says that “many Gartner clients… feel they are getting low value from the suite and paying for services they don’t use.” Gartner goes on to say “In many cases, this is due to Microsoft not showing the true value of the extended services in a meaningful way to IT application leaders and business employees, as well as overlapping social and collaborative functions from services to services.”

There is a lot of truth here. Most people understand the value of the core workloads (Exchange and SharePoint). Microsoft does its best to explain the value of the applications built on top of those workloads, but it runs into problems with overlap and confusion, like the debate about Groups, Teams, and Yammer. Sure, an experienced observer of Office 365 can probably give good advice to an organization about which application best fits their needs, but the average tenant administrator might struggle.

Gartner recognizes that hybrid environments increase complexity but are essential to meet business demands and says that a 2016 survey found that “difficulty with hybrid implementation” was by far the most common technical problem, with 28% (of 243 organizations) listing it among their top three problems.”

Gartner says that migration is the second most commonly raised source of technical issues. In many cases, migration and hybrid environments go hand in hand, especially for large enterprises who want to keep part of their deployment on-premises while moving work into the cloud to take advantage of the economy of scale, monthly billing, flexibility, or other reasons proffered to support the need to move.

To be fair to Microsoft, they have worked hard to make hybrid connectivity and migration easier. Microsoft’s FastTrack Centers and better migration tools, including those from ISVs like Binary Tree, Metalogix, AvePoint, BitTitan, Quadrotech, and others ease the pain of moving data to the cloud. And the fact is that Office 365 has over 100 million monthly active users, so migrations are happening at some pace.

Generally speaking, experienced Office 365 consultants have no issue making the basic workloads work well with their on-premises counterparts. Hybrid problems now arise with applications that do not exist on-premises, like Groups, Teams, and Planner where issues like how to make mail contacts work with external access to groups occur. It is fair to criticize Microsoft about how they sometimes introduce functionality into Office 365 without thinking will the new code will affect hybrid environments.

Anyone working with Office 365 should read Gartner’s report, if only to understand the advice and guidance that Gartner gives to its customers about Office 365. The most important thing to do afterwards is to put Gartner’s comments into context with your own deployment by applying your knowledge of how Office 365 works (or doesn’t) for your organization and why that is.

Like any consultants Gartner deals with generalities across a huge canvas. You keep Office 365 running on a day-to-day basis. The view is very different from the two perspectives, so make your own mind up about what is important and what is not. And then decide what to poach.