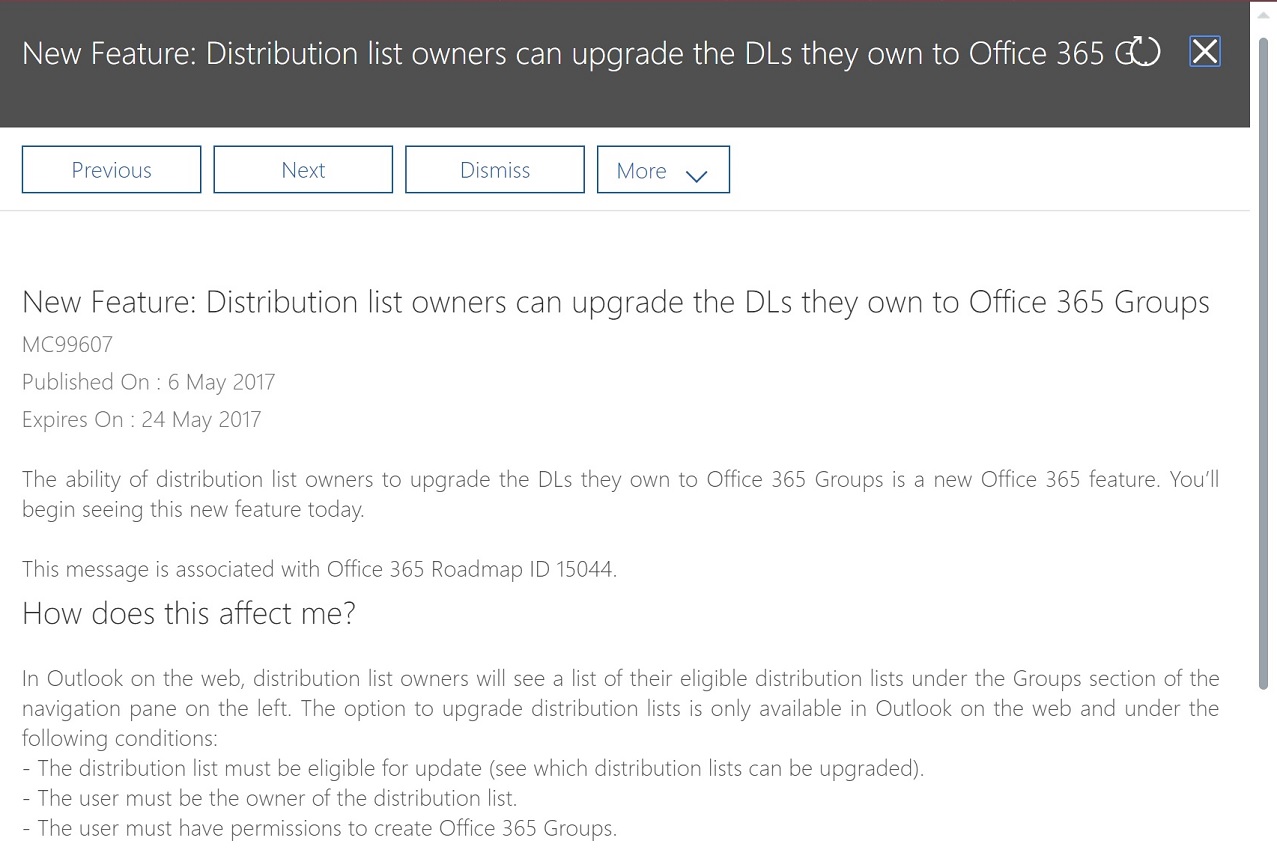 On April 24, Microsoft announced that distribution group owners can upgrade these objects to Office 365 Groups (message center item MC99607). Microsoft says that the new feature is in response to customer requests for ways to upgrade distribution groups, which some now consider obsolete.

Distribution groups (or lists – DLs) have certainly existed for a long time in the world of email. Simplicity is their major benefit. A DL is a way to send messages to multiple email recipients using a single address – no more, no less. DLs are a known entity for most email systems, making them easy to synchronize, including back to on-premises Exchange.

Microsoft’s view is that Office 365 Groups are a better platform for collaboration as they can act like a DL (for some recipient types) while also giving group members access to a shared calendar, notebook, and team site. And of course, Groups are the gateway to Teams and Planner. All of which is true.

Because they should know how people use their DLs, allowing DL owners to make the decision to transform a DL to an Office 365 Group is a reasonable idea. Since August 2016, Administrators have had the ability to upgrade distribution groups to Office 365 Groups through the Exchange Administration Center (EAC). Alternatively, they can convert DLs by running a set of scripts written by Microsoft. You can consider the initiative to give group owners control over conversion an extension of what has gone before.

Not all DLs are candidates for conversion. Office 365 Groups only support user accounts and guest user accounts in their membership. You cannot convert DLs:

This support article explains the restrictions.

In addition, only an owner of a DL (i.e., the user appears in the DL’s ManagedBy property) can convert it. Logically, they must also have permission to create new Office 365 Groups. And even more sensibly, OWA only reveals the choice to convert distribution groups to users who have already created and used Office 365 Groups using the logic that these folks already understand the value that Office 365 Groups bring.

The new conversion method is only available for simple DLs with ten members or less. You can convert more complex DLs by writing the necessary PowerShell code (like my example in the TechNet gallery). Sometimes a mixture of scripting and manual updates is necessary, which is what I discovered when I converted a DL for the Exchange MVPs to an Office 365 Group last year.

OWA is Microsoft’s test-bed client for Office 365. It is the easiest client to update. As normal, new functionality shows up first in OWA and that’s where conversions happen.

To make suitable DLs known to OWA, a background process periodically examines the DLs owned by a user to assess whether any are candidates for conversion. OWA lists two of the DLs that pass the test at the top of the Groups section in its resource list, prefixed by “DL” to show that these objects are not Office 365 Groups. You might manage more than two DLs but OWA will only show two, apparently chosen randomly from the available set. While the feature is in First Release, Microsoft is experimenting with how to present DL conversion to users. For now, we get to choose from two, which is what you see in Figure 1. 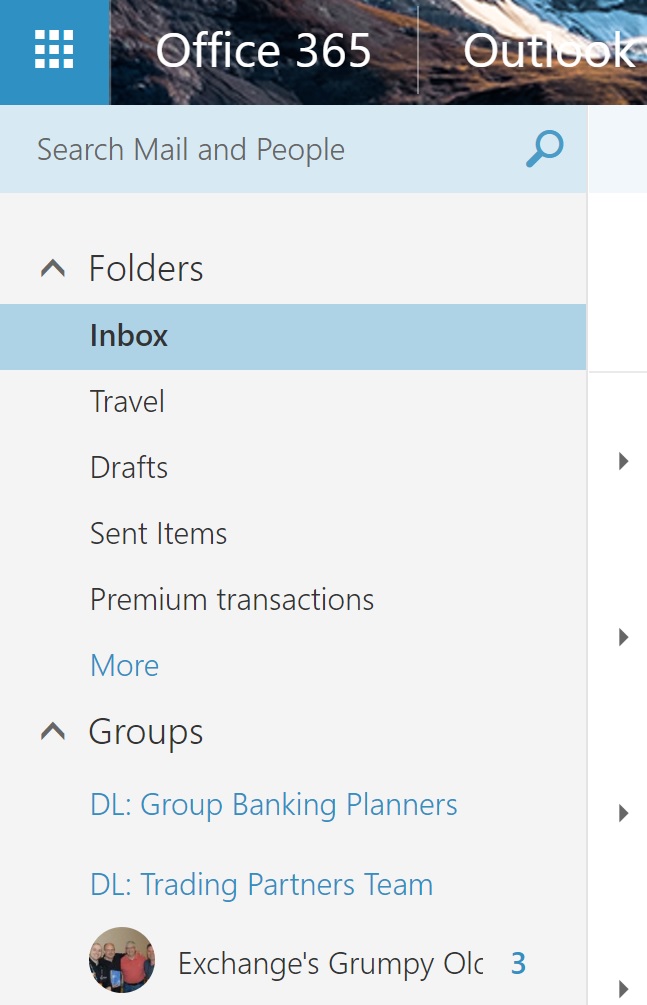 To proceed, select a DL from the list. OWA responds with a splash screen (Figure 2) to tell the user that their choice will give their DL a boost and that we’ll all end up working brilliantly together. 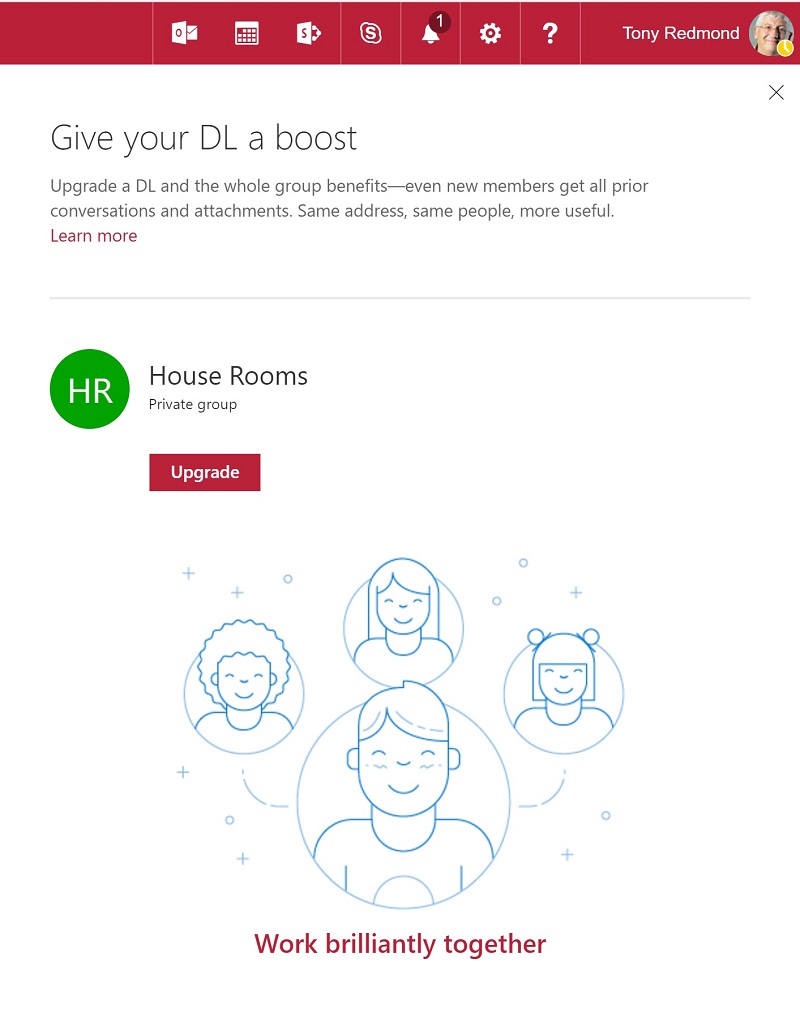 I can’t quite say why, but I have an almost visceral disliking of the cartoon characters in the graphic. It must be an age thing, but this grumpy thinks IT is a serious business rather than a chance to clasp hands, smile, and sing songs of joy.

Fortunately, Microsoft has only released this feature to First Release tenants and might tweak the amount of projected happiness before general availability. They might also provide a control to block users converting DLs to Groups if this is deemed undesirable by a tenant.

In any case, click Upgrade and magic happens to transform your DL into an Office 365 Group, presumably by running the New-UnifiedGroup cmdlet and specifying the DlIdentity parameter to give the name of the source DL and ConvertClosedDlToPrivateGroup if the input DL has restrictive membership. Also, the conversion must specify the DeleteDlAfterMigration switch because the conversion removes the source DL. Putting it all together, a command like this converts a closed DL to an Office 365 Group:

The new Group takes on the old DL’s email address and display name. I noted that the conversion does not add the person who manages the old DL to the new Office 365 Group as a member. They are an owner, but not a member, which means that they can manage the group but can’t access group resources.

Microsoft is like a dog with a bone in its teeth when it comes to the topic of moving tenants off DLs. There is no doubt that Office 365 Groups are more functional. Microsoft is pouring enormous effort into making Groups even more functional, including creating the ability of Groups to act as a membership and identity service for new applications. Teams and Planner are great examples of how Groups are at the center of Office 365 collaboration.

Even so, I suspect that it will take quite a while yet before the last DL is eradicated from Office 365. Perhaps DLs will be as durable as public folders.