At Microsoft Ignite I participated in a PowerShell Q&A session, where someone asked how to use conditional breakpoints in PowerShell for a script, so that processing would break only when a condition was met. Usually this sort of thing is done with a variable. For example: if $X is greater than 10, then break. At the time, I couldn’t give him the exact steps, because I develop my scripts and tools in such a way that my debugging needs are minimal. But when I got a chance I cracked open PowerShell, so I could explain the process to all of you.

You should know that you can work with breakpoints directly in the PowerShell console. You are not limited to the PowerShell ISE. A breakpoint is a user-defined trigger that pauses pipeline processing and drops you into a debug mode. The cmdlet you use to create this breakpoints is Set-PSBreakpoint. As you look at help, you will see there are a few ways to use this cmdlet. We’re going to work with variables.

The variable parameter will be the name, without the $. The mode defaults to Write access.

PowerShell will trigger the break just before the variable is updated. And finally the action parameter is a scriptblock of PowerShell commands that you want to run when the breakpoint is reached. This is where the conditional magic happens. To demonstrate, let’s do a simple test in the console. First, define the breakpoint.

I haven’t told PowerShell to do anything other than watch when $i is updated.

As soon as PowerShell tries to write to $i, it goes into debug mode.

Notice the prompt change. I can run just about any command I want here and even look at the value of $i. Type a ‘?’ to see help. 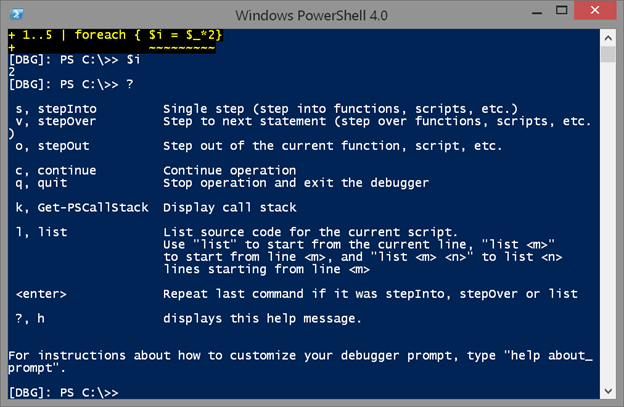 When you are ready to continue, type ‘c’ or ‘continue’. Now let’s get conditional. First, I’ll remove all my breakpoints, so I can start over.

Next, I’ll define my conditional scriptblock, which can be as complex as you need it to be.

In my case, I’m telling PowerShell that if $i is greater than 5, then go into debug mode. I’ll set the breakpoint with this action and test it out.

PowerShell kept running until the condition was met. This was testing directly in the console. Let’s take another step and watch a variable in one of my functions. Again, I’ll remove the existing breakpoints.

Here’s the function I want to debug.

I’m going to test with a list of servers.

As soon as the condition is met, I enter debug mode, where I can do all the checking I need. 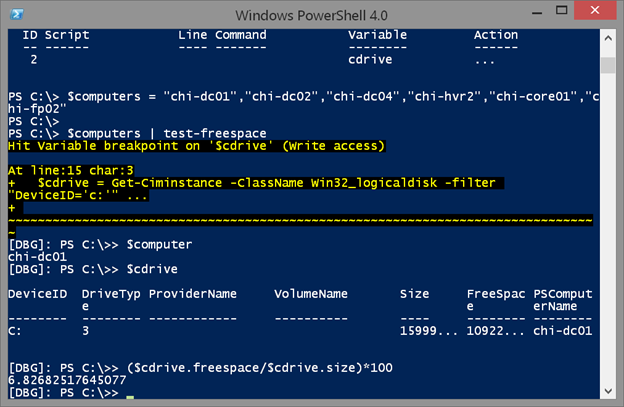 Obviously you need to have access to the command’s source code to know what variable name to use. Let’s remove the breakpoint, and try again with a script.

I want to set a breakpoint so that if the count of $d, the non-admin shares, is greater than or equal to 3, then I’ll drop into debug mode.

There is no specific line in the script that I want to debug, just the variable.

I run the script and hit the breakpoint. 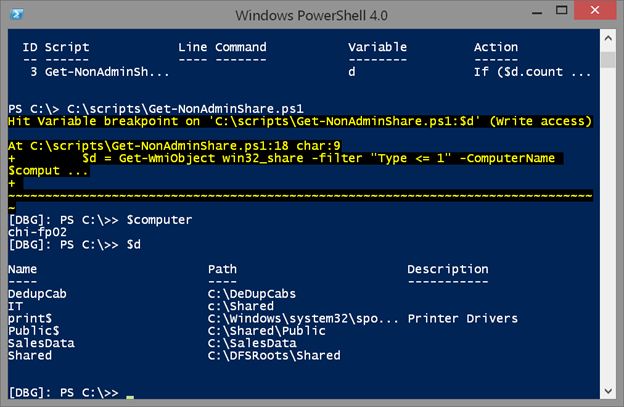 Excellent. This is just what I expected, and hopefully you realize that this isn’t too complicated. However, if you are using the PowerShell ISE, all you can do is set a breakpoint on a given line.

You could manually type the same commands I’ve just demonstrated in the PowerShell ISE, but that takes too long. Instead I wrote an add-on for the PowerShell ISE that will let you create a conditional breakpoint.

When you run this function, it will add a menu shortcut under the Add-Ons menu.

In my function, I want to set a conditional breakpoint on $computer, so I select the variable name. Don’t include the $ sign.

The function displays an input box, where I can create the condition that will go into the if statement. My function assumes you aren’t doing anything other than breaking if the variable meets some condition.

In my case, I enter this:

Here you do need the $ sign with variable name. My function created a breakpoint in the ISE.

Now I can run the script in the ISE and when I get to one of my domain controllers, I’ll drop into debug mode. 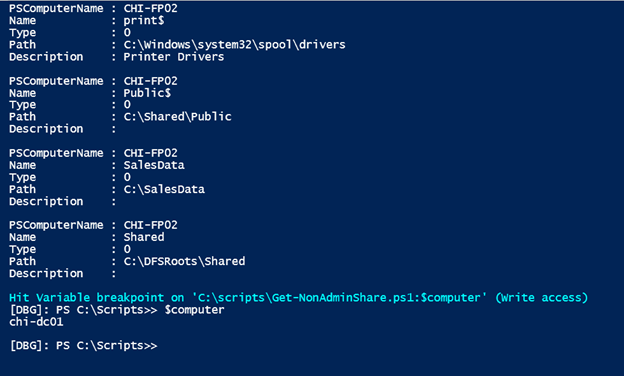 As you can see, the script runs normally until my condition is met. From here I can use the debug menu in the ISE to disable or remove the breakpoints.
Conditional breakpoints are actually quite interesting. True, they can help with debugging a script or function, but I also like how they all me to step through my script interactively. If you found this useful, I hope you’ll let me know. I’d also like to know what else keeps you from creating killer PowerShell tools.