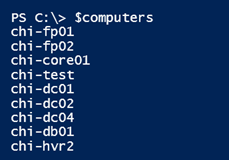 Over the course of a few articles, I’ve been demonstrating a number of techniques and tools for creating lists of computer names. If you are just jumping in, then I hope you’ll take a few minutes to get caught up, otherwise some of the material in this article might not make sense.

Once you’ve created your list of names, then you need to validate it. The assumption is that you want to run some PowerShell command against your list of remote computers, but there’s no guarantee that every name in the list is valid or even running. It’s quite easy to include error handling in a script with a try/catch statement, but let’s see what we can do to validate the list before we even get to that step.
I’m going to use an existing text file.

How to Use PowerShell For and While Loops