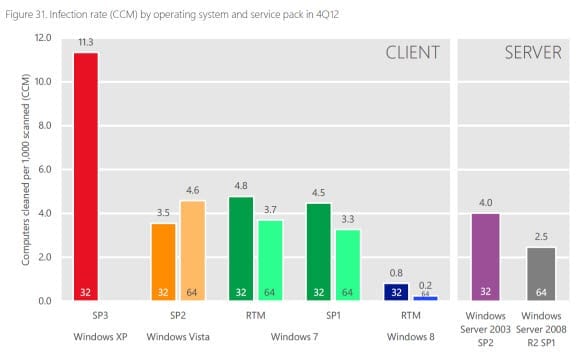 Support for Windows XP ends in April 2014, with Windows Server 2003 following in July 2015. But what does this mean for users and organizations still running these products? Microsoft recently warned that Windows XP users face ‘zero-day’ vulnerability forever on their PCs, as once the company stops releasing security updates, the defenses built-in to the aging OS won’t be enough to fend off today’s sophisticated attacks.

What struck me was not this piece of unsurprising information, but the results of Microsoft’s Security Intelligence Report 14  from the fourth quarter of 2012, which uses data gathered directly from the install base of each OS. As you can see in the figure below, while it’s no surprise that Windows XP is considerably more prone to infection than later versions of Windows, it’s twice more likely to be infected than Windows Vista. The data in the report is normalized, so a sample of one thousand computers was analyzed for each operating system version.

Windows 8 has a particularly low infection rate, but that could be due to the fact the OS had only just been released at the time the report was published, when attacks that specifically target the improved defenses of the OS were few. Additionally, it’s worth remembering that Windows 8 is the first version of Windows to include signature-based malware protection out of the box. With the imminent release of Windows 8.1, we may see those figures improve further as Windows Defender adds network-level inspection to the mix.

Microsoft’s Security on the Server

As servers are not generally used interactively in the same way as desktop PCs, with the exception of terminal servers, they are at less risk. So replacing Windows XP might be more of a priority than upgrading to Windows Server 2012. Furthermore, it may not be easy for organizations to move legacy applications away from old versions of Windows Server for compatibility reasons.