Microsoft’s April 4 announcement that Kaizala, their phone-based WhatsApp-like mobile “large-group” collaboration app, is to roll out to Office 365 commercial customers worldwide and become part of Teams generated some interesting reactions. Apart from the name that is, which apparently means “what happened” in Marathi, a language spoken in parts of India.

Kaizala started as a Microsoft Garage (experimental) project launched in February 2016 and became a formal product a year later, originally available in select markets like India. Because it’s based on phones, users only needed a phone number to use Kaizala. The “Pro” version then became available in 28 countries for commercial customers. Now Kaizala (Pro) will be available to the 155+ million Office 365 users in 180 markets worldwide.

Too Many Ways for Office 365 Tenants to Collaborate

Although generally positive about the prospect of Kaizala becoming part of Teams, some expressed concern that enabling Kaizala for their Office 365 tenant would confuse users. It’s already hard enough for organizations to decide what parts of Microsoft’s collaboration portfolio to use inside Office 365. Should I use Teams or Yammer for threaded discussions, can I replace email with other collaboration modalities, what about SharePoint hub sites, and so on.

Organizations in the middle of Teams deployments, with or without a migration from Skype for Business Online, are especially unlikely to welcome a new complication. Microsoft’s response is that it’s easy to disable (or enable) Kaizala through its Admin portal. When I checked, I found that Kaizala is disabled for my tenant (Figure 1). 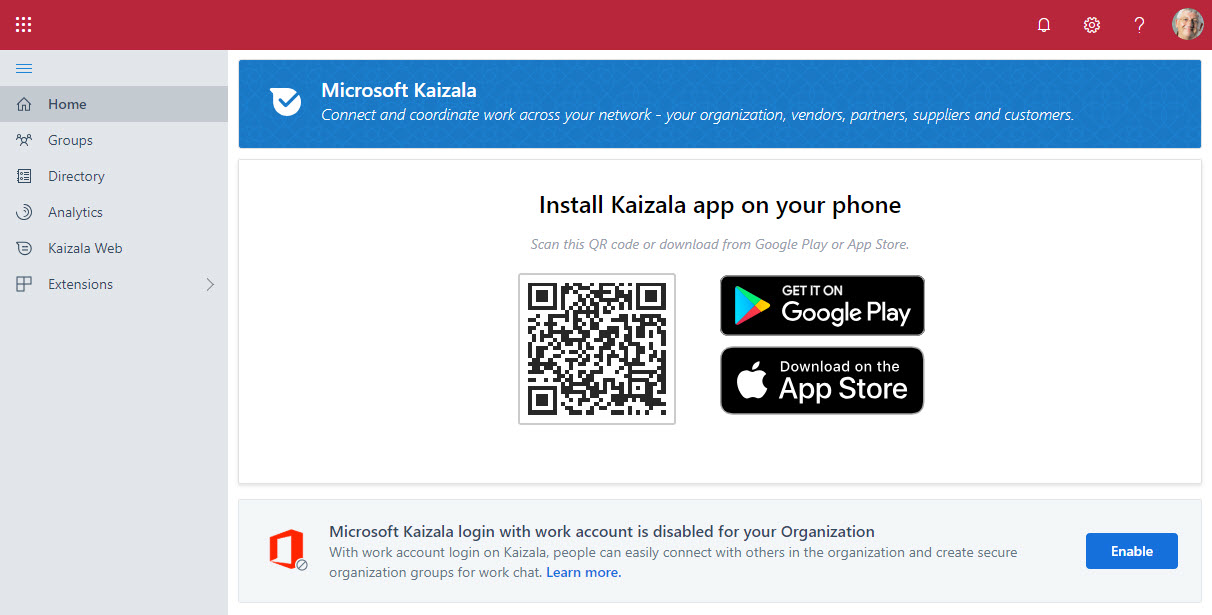 Enabling Kaizala takes a couple of clicks. But before you do that, consider if you need Kaizala now or if it would be better to wait until Microsoft delivers on the promised integration with Teams.

Kaizala is designed for mobile phones. Its target market is frontline workers in countries where network connectivity is less pervasive and powerful than is typical in first-world countries, which is why Kaizala includes support for offline work. Teams and Outlook mobile are both highly capable apps, but they’re also packed with features and all that functionality depends on connectivity with the server. Kaizala is less functional than Teams, but it works across low-bandwidth connections.

The “open directory” approach in Kaizala means that if any of your phone contacts use Kaizala, you can start chatting with them using the app. It also means that Kaizala is easier to deploy to temporary workers or people who don’t get a corporate email address. This is very different to the Office 365 apps, which are only accessible to people with licensed accounts in an Office 365 tenant.

Apart from text messaging and audio and video calls, all of which work like WhatsApp and other popular messaging apps, Kaizala includes support for different kinds of groups. You can have private or public groups, and you can create a work group (mapped to an Office 365 tenant) based on an Exchange distribution list or Office 365 group. The members of the source group then receive an email invitation to join Kaizala (Figure 2). One (blindingly obvious but sometimes overlooked) point to watch out for is that members, including guests, won’t be able to access the Kaizala group until they download and install the app. 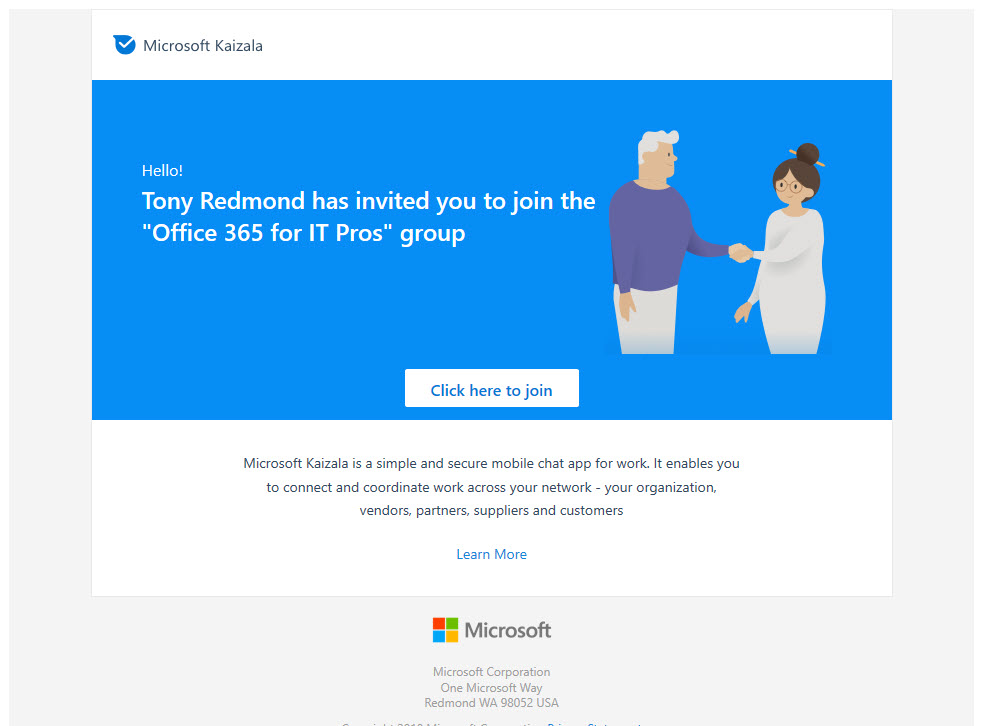 If you create work groups, you can require users to log-on with their Office 365 credentials before they access the group. (see the Access setting in the Kaizala settings in Figure 3). 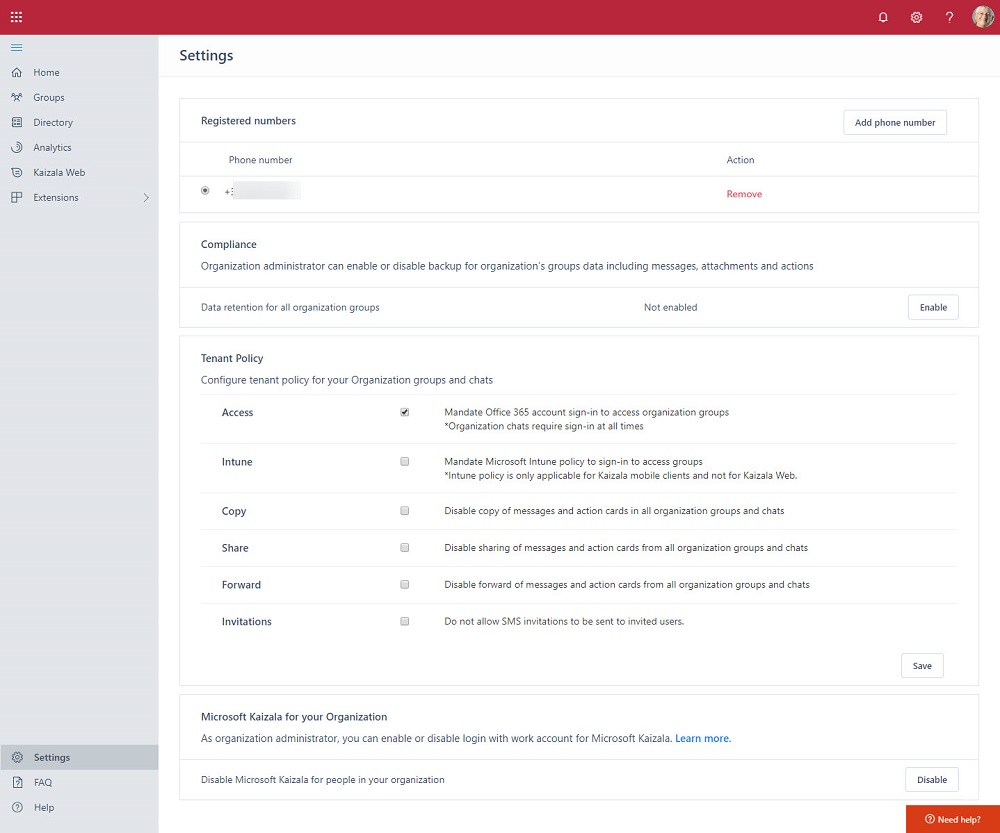 Kaizala also comes with inbuilt actions for tasks such as collecting data in a form or survey, publishing a checklist, or making an announcement to a group. All the actions are tailored for mobile consumption.

In a nutshell, if your organization has a large community of frontline or other employees whose primary communication device is a mobile phone, Kaizala might be a good answer for their needs, especially if bandwidth or connectivity is a concern.

On the other hand, Teams might be equally a good choice. It all depends on the type of communications employees need with other employees, the applications they use, devices in use, and connectivity.

Which brings us to the question of how Microsoft will integrate Teams and Kaizala. On the surface, Teams serves a very different user set than Kaizala does, but the flexibility of the Teams framework seen in the Shifts application for frontline workers gives an indication of how things might unfold.

According to Microsoft, the process will unfold in phases over the next 12 to 18 months. Microsoft hasn’t said how they plan to bring the two applications together, but here’s three areas where integration might happen.

The danger here is that Teams tries to be the Swiss Army Knife of Unified Communications with chat, voice, and video for all delivered in multiple clients with moderate success for everyone. With over 500,000 organizations using Teams today, there’s no doubt that Microsoft’s fastest-ever growing application is successful. Kaizala is successful too, but only in serving a radically different target audience than addressed by Teams. The challenge facing Microsoft is to merge Kaizala into Teams in an elegant and productive manner that preserves the best of the two current implementations and delivers more value to corporate and personal users.