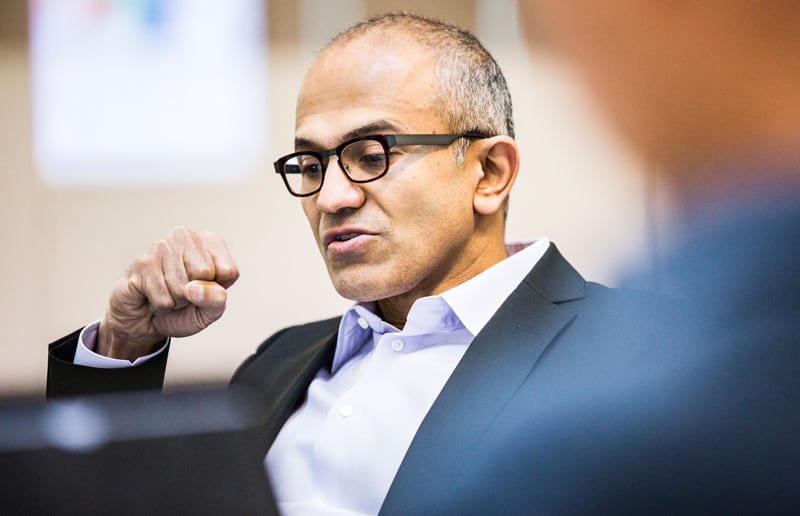 Microsoft CEO Satya Nadella is currently facing criticism after his appearance at the Grace Hopper Celebration of Women in Computing conference, where he offered his thoughts on how women might go about asking their employers for a raise.

“It’s not really about asking for the raise, but knowing and having faith that the system will actually give you the right raises as you go along,” Nadella responded to computer scientist, Maria Klawe, who asked Nadella for advice on the subject.

“That’s good karma. It will come back. That’s the kind of person that I want to trust, that I want to give more responsibility to,” Nadella continued.

Following his appearance, Nadella retracked his statement and issued an apology through Twitter:

Was inarticulate re how women should ask for raise. Our industry must close gender pay gap so a raise is not needed because of a bias #GHC14

In addition, Nadella followed up by sending an internal memo to Microsoft employees. The following is an excerpt of Nadella’s internal memo:

“I answered that question completely wrong. Without a doubt I wholeheartedly support programs at Microsoft and in the industry that bring more women into technology and close the pay gap. I believe men and women should get equal pay for equal work. And when it comes to career advice on getting a raise when you think it’s deserved…. If you think you deserve a raise, you should just ask.”

Although Nadella apologized for his blunder, his initial advice given to women in STEM industries is sombering. According to the United States Bureau of Labor Statistics, women earn 77 cents for each dollar that men earn for the same work. Of course, many would agree that the gender pay gap is admittedly the largest part of the problem. But, another troubling factor to this trend is the fact that women are already following Nadella’s advice by not attempting to negotiate for a raise.

According to a statement made by the Institute for Women’s Policy Research, if the annual earnings ratio between women and men continue at the same pace that is has since 1960, then it will take 45 years — that is, until 2058 for women and men to make comparable wages on equal footing. This statistic alone should provide insight into why it is so important for women to start speaking up to their employers about their wages.

There’s an article on Forbes that’s worth reading and attempts to explain why the trend of women not asking for higher salaries exists. Contributing factors include women underpreparing for making such a case, women possessing lower expectations for their salary, and women who fear reputation risks from asking for a raise. Additionally, women who do attempt to negotiate for a higher raise, often make fatal errors where they unintentionally downplay their achievements with phrases, such as “It’s no big deal.”

With that said, what Nadella and other leaders in tech industries should be teaching is awareness and methods so that women can communicate more effectively about their desired salaries. Following Nadella’s comments, Klawe countered his advice by providing her own thoughts on how to change the landscape for women working in tech industries.

“This is one of the very few things that I disagree with you on… Here’s my advice to all of you. First of all, do your homework. Make sure you actually know what a reasonable salary is,” Klawe stated, where her statements were met with applause.

My Advice to Women in Technology

Although I do not agree with Nadella’s original statement, I can’t entirely blame him for his statement. I’d imagine that it might be difficult to understand the complexity and scope of these type of gender issues without having directly experienced it. As a woman myself who started my career in computer science, where I was one out of four females, out of a total of 75 students entering the computer science program at my university, I understand that it can be difficult to speak up as a minority in tech industries. Easier said than done, right? But if there’s any advice that I can give to fellow women in technology, it is the fact that a little goes a long way when you take the time to honestly communicate your thoughts and feelings, whether that be discussing your salary with employers or making it clear that you want something changed among your colleagues. I’m adamant that the first step to changing the current landscape is to educate yourself and not turning a blind eye to what exists in STEM industries today. We aren’t doing ourselves any favors by not speaking up, but valuing ourselves and making that heard is something that all women in tech deserve.

You can watch the entire conversation between Nadella and Klawe over on livestream.

What are your thoughts on Nadella’s comments? How might you envision a change in the gender pay gap, especially in STEM industries? I’d love to hear your thoughts, so please feel free to leave a comment below the article or via social media.