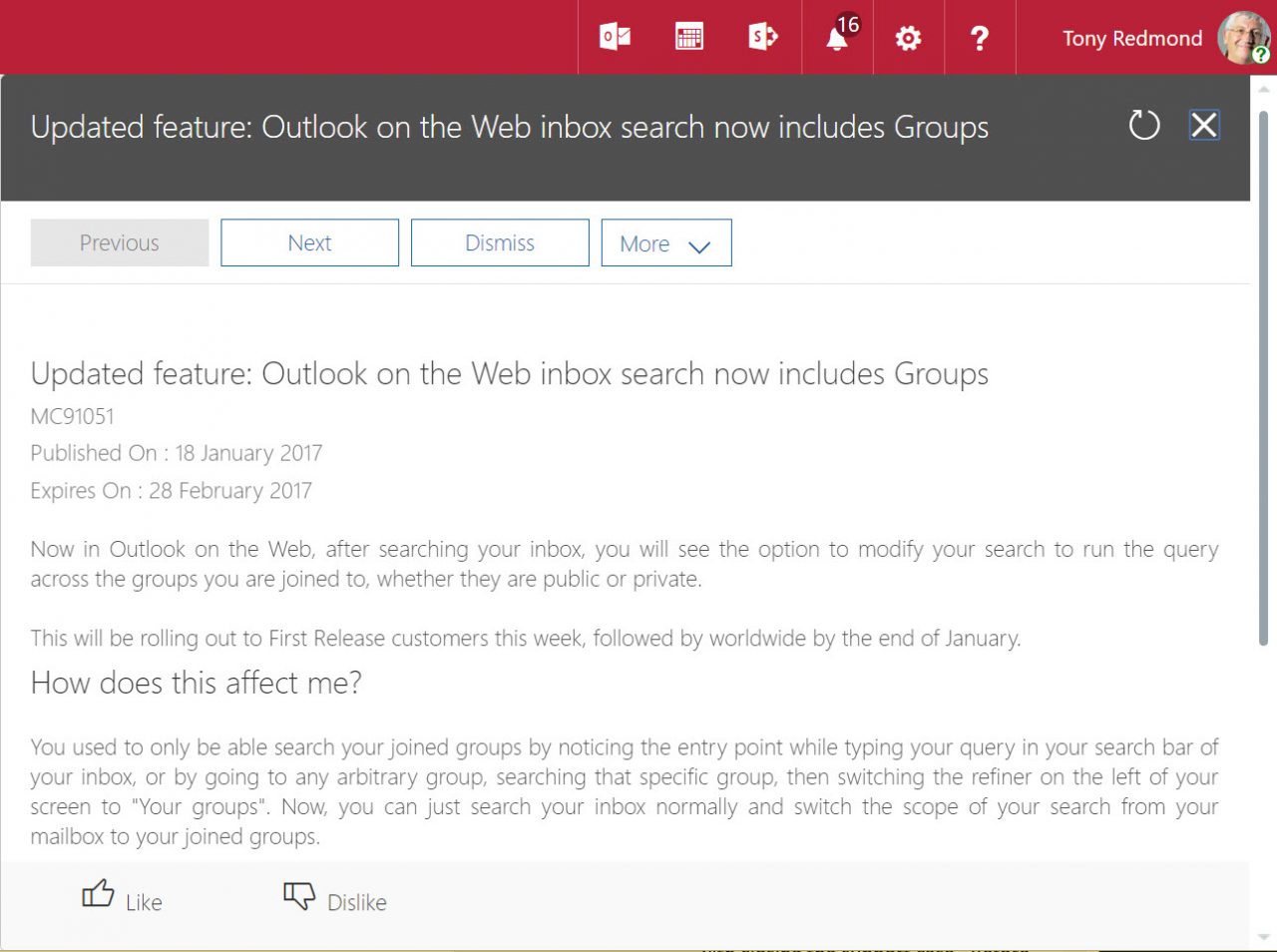 In another example of how OWA continues to be the most innovative of all Office 365 clients, OWA now boasts the ability to search the conversations of the Office 365 Groups to which a user belongs. Microsoft is rolling out the new capability to First Release tenants now with the intention that the feature will be available throughout Office 365 by the end of January 2017.

Although search supports folders in the archive mailbox, OWA searches usually focus on content stored in folders in the primary mailbox. The “People” option is also available, which is just a quick way to find messages from a specific person with whom you have communicated via email.

Now you can add “Your Groups” to the mix. You can use all the search qualifiers that you’d expect, like specifying “Sent:01-Dec-2016” to find items delivered to groups on that date.

Search magic is possible because the Search Foundation indexes all the information stored in Exchange Online mailboxes, including the group mailboxes used by Office 365 Groups. Because the content is indexed, it can be searched. The content searches created and managed through the Security and Compliance Center also use the Search Foundation indexes to include Office 365 Groups in eDiscovery cases.

Figure 1 shows an example. In this case, I’ve opted to search for “ExchangeServerPro” to find items relating to MVP Paul Cunningham. Search allows me to look through the conversations held in the 50 groups where I am a member and displays the found items as normal, all of which are tweets collected in a group using an Office 365 connector. 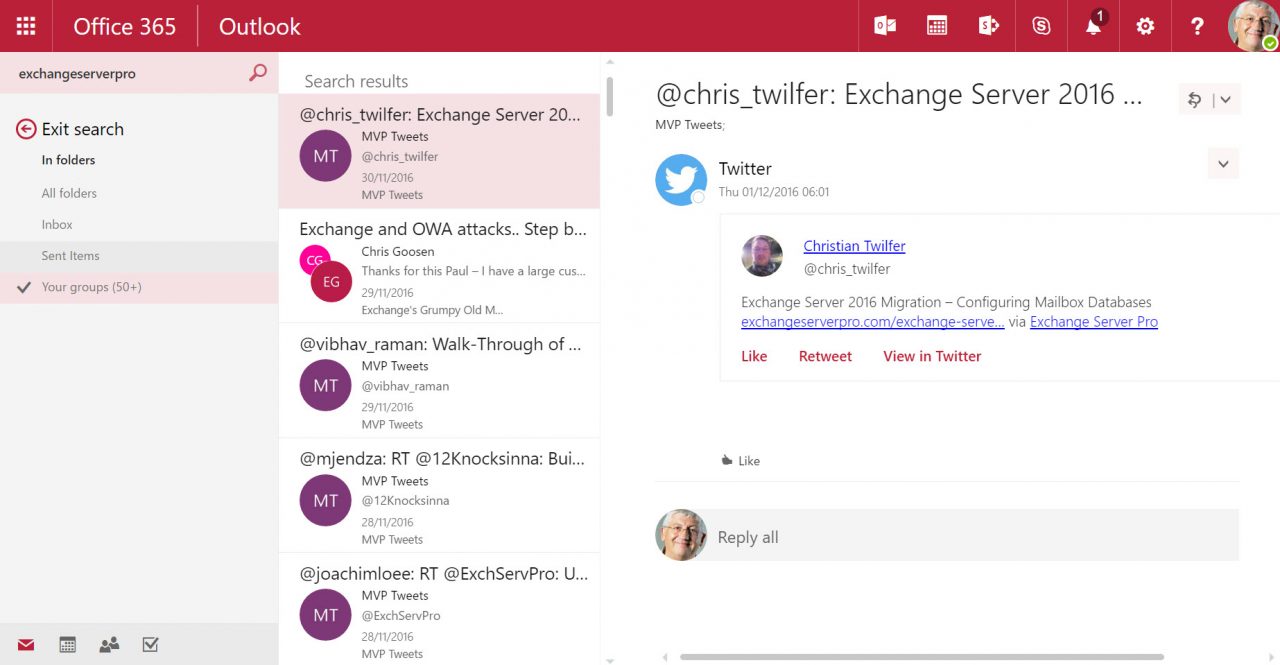 Generally, the inclusion of Office 365 Groups into searches works well and searches return information quickly. I did notice a couple of small issues. First, when you exit a search after accessing some group content, OWA sometimes but not always returns to the group rather than the original position in the primary mailbox. Second, if a search returns content found in multiple groups, the transition from one group to another is sometimes not smooth, probably because OWA must open another group mailbox to access the items. Third, for whatever reason, OWA occasionally refreshes itself completely when it returns from a search (almost as if you clicked the browser refresh page button). Microsoft is likely to resolve these small glitches before the feature reaches general availability across Office 365.

It is also true that OWA is the only client that can search Office 365 Groups. Outlook 2016 supports Groups, but let’s face it – search has never been Outlook’s best feature and I’m usually happy when an Outlook search finds something. Extending the UI to accommodate Office 365 Groups and convincing Outlook that it might look there will probably take some time. I don’t expect to see Outlook emulate OWA in soon.

Given Microsoft’s push to move away from traditional email distribution groups to Office 365 Groups whenever possible, it is unsurprising that they introduce additional features to emphasize the usefulness of Groups. However, as I discussed in an article explaining how I converted an email distribution group containing many external users to an Office 365 group, conversion is not always straightforward.

Distribution groups have been around for so long and are used in so many “interesting” ways that it will take time for migration technology to catch up. Even Microsoft’s own tools struggle to cope to convert anything but simple email distribution groups.

The use of guest user objects to represent external people in Office 365 Groups is causing some problems in the field. Tenants often use mail contacts to hold the details of people that users communicate with but whose mailbox is on a different email system. You must convert mail contacts to guest user objects before they can join an Office 365 Group, but the conversion has several side effects. The most benign consequence is that the mail contacts disappear from the GAL, which removes a lot of their usefulness. This is another issue that Microsoft needs to resolve.

I learned about OWA’s ability to search Office 365 Groups through the Office 365 Message Center. Microsoft has been getting better at the timeliness and quality of the update information they give to tenants through the new Office 365 Admin Center (Figure 2), including associating messages about new functionality with references to the Office 365 Roadmap. 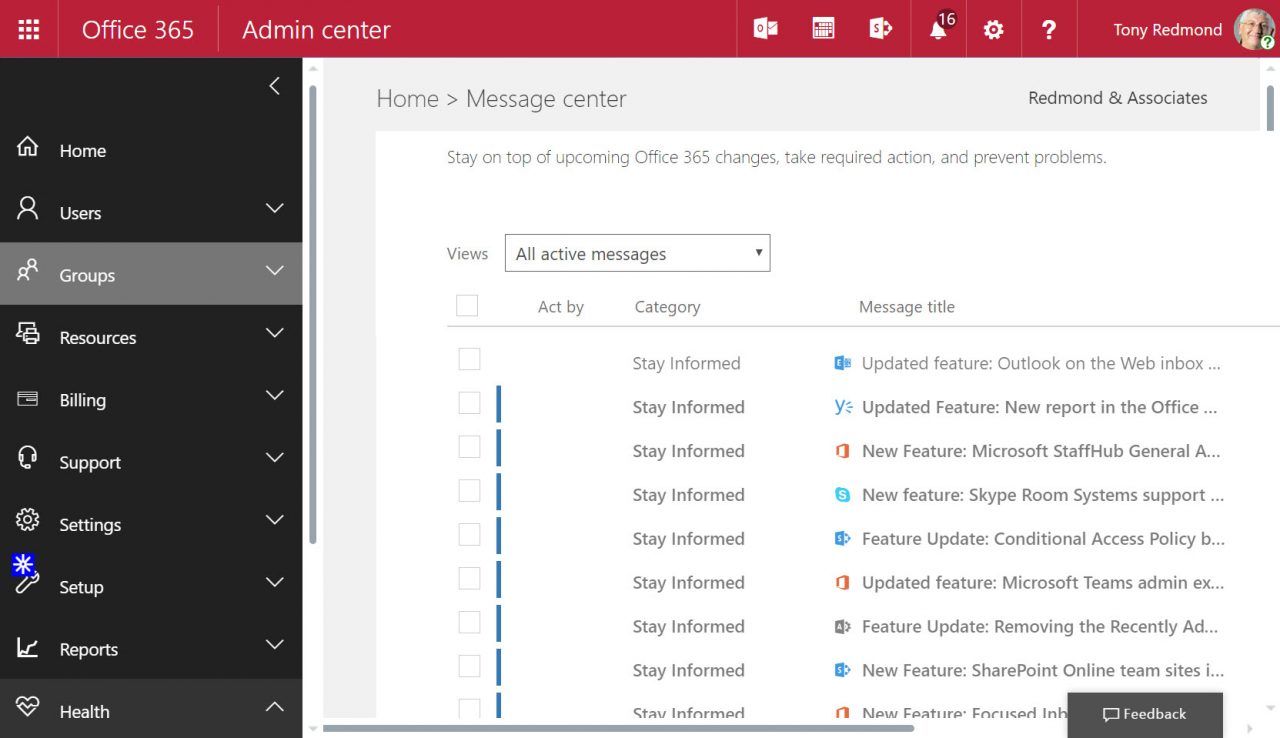 No One Looks at Messages

Tenant administrators are busy people and other more important tasks probably take away the time that they would use to review messages in the Office 365 Admin Center. Another feature makes it easy to receive a weekly digest via email of updates (Figure 3). To set the digest up, edit your message center preferences and make sure to enable the digest. Curiously, the addition of the message center digest never showed up in the roadmap. Its appearance came as a complete surprise, albeit one that I like because the functionality is so useful. 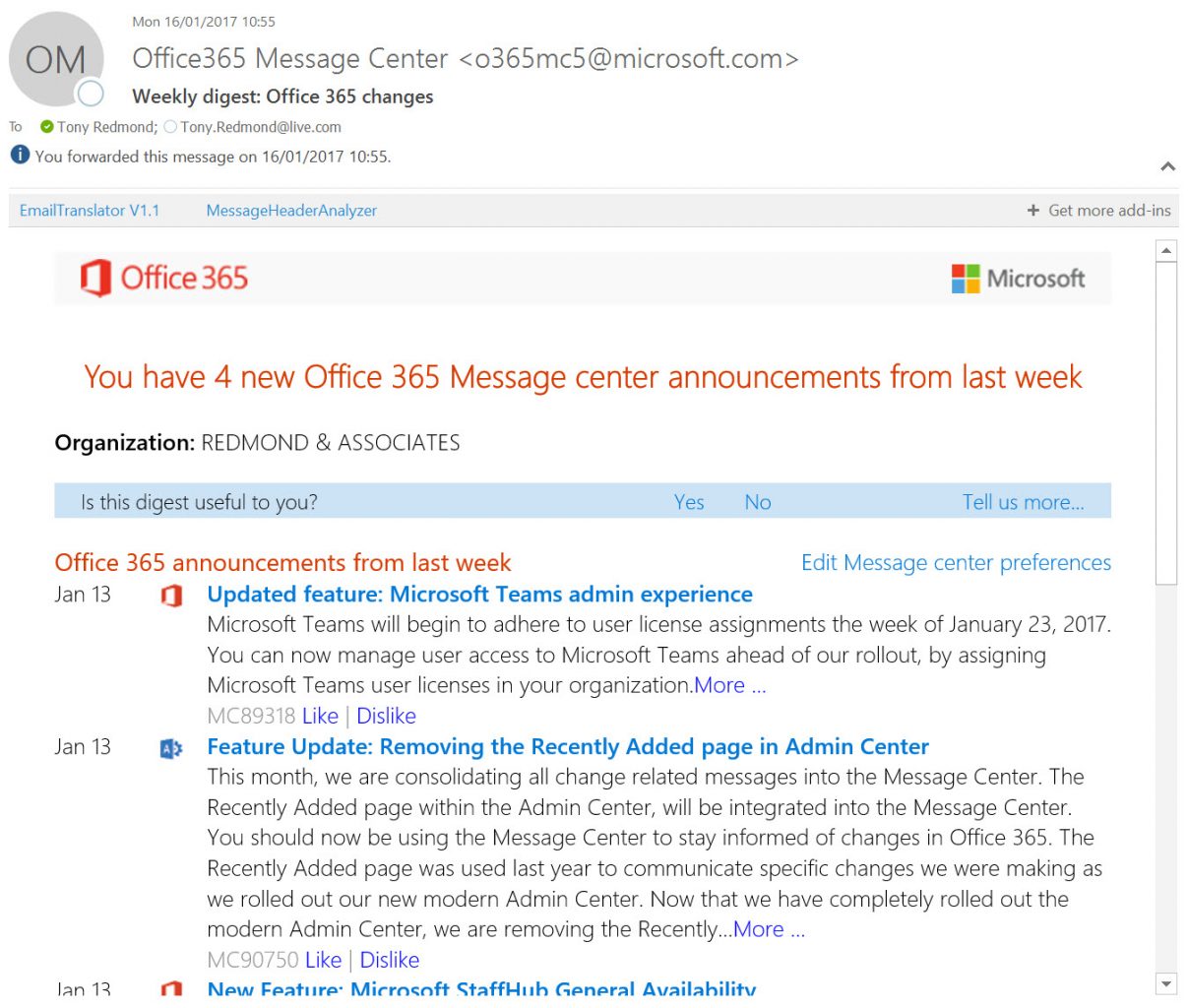 Following a January 24 announcement on the Exchange team blog, everyone got excited that the Exchange Online version of the Exchange Administration Center (EAC) now supports the necessary GUI to allow administrators to assign the Send As and Send On Behalf Of permissions for Office 365 Groups. This capability has been available for a while in PowerShell as the Add-RecipientPermission and Set-UnifiedGroup cmdlets are used to set these permissions. But now we have a GUI, which is nice. Oddly, you can assign permissions to someone who is not a member of a group, but that matches the way that these permissions are managed for other mail-enabled objects.

Maybe Outlook Could Search Too?

Getting back to search, now that Microsoft has spiffed up OWA’s search capabilities, maybe they could take another look at the accuracy, performance, and capabilities of Outlook searches. It is not that the desktop client is always inaccurate or that it cannot search in the same way that OWA works; it is just a matter of making sure that search works the same everywhere. Wouldn’t that be a nice thing for the Outlook brand?