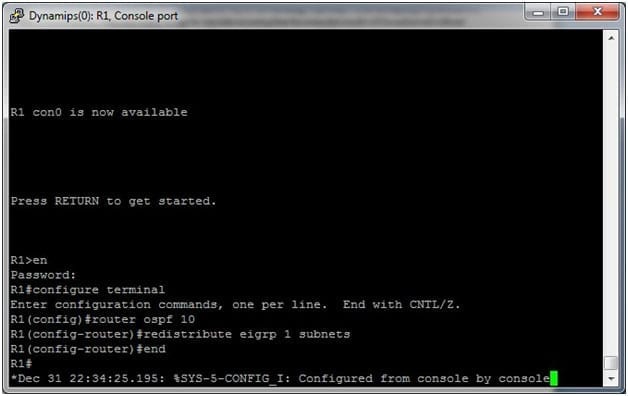 Configuring OSPF redistribution in the first place can be very overwhelming, especially when attempting to perform two-way redistribution. There are many things to consider ensuring that the intended result will be achieved without injecting unwanted routes into either network. This article takes a look at OSPF redistribution, how it is done and some things to look out for when configuring it to ensure that any potential problems are limited.

Running down all of the potential problems with redistribution is a very complex task and is well outside the scope of this article, this article will focus on the things to look for when configuring OSPF redistribution to ensure that it works as expected.

Things to Look for When Using OSPF Redistribution

OSPF also has another feature that makes it unique, this includes the ability to change the way metrics are injected. By default, OSPF injects all routes as type E2; what this means is that the metric that is injected at the ASBR (the device connecting to the external routing domain) will be used throughout the OSPF routing domain without being altered. Of course, if this is a large OSPF network, the metric being static can be misleading especially when received on devices on the other side of the OSPF network. OSPF also has support for E1 routes.  E1 routes take the metric that is configured at the ASBR and adds on the calculated OSPF metric as it is sent through the OSPF network; this makes the metric that is used much more useful when being used in a large OSPF design.

There are a large number of issues that must be considered when setting up redistribution.  When multiple routing domains exist and redistribution is required it is very easy to set up domain loops that make routing very inefficient. The purpose of this article was to highlight the common OSPF redistribution issues that engineers encounter and review the information that is needed to avoid them.