Microsoft to Office 365 Users: Have Your Credit Cards Ready 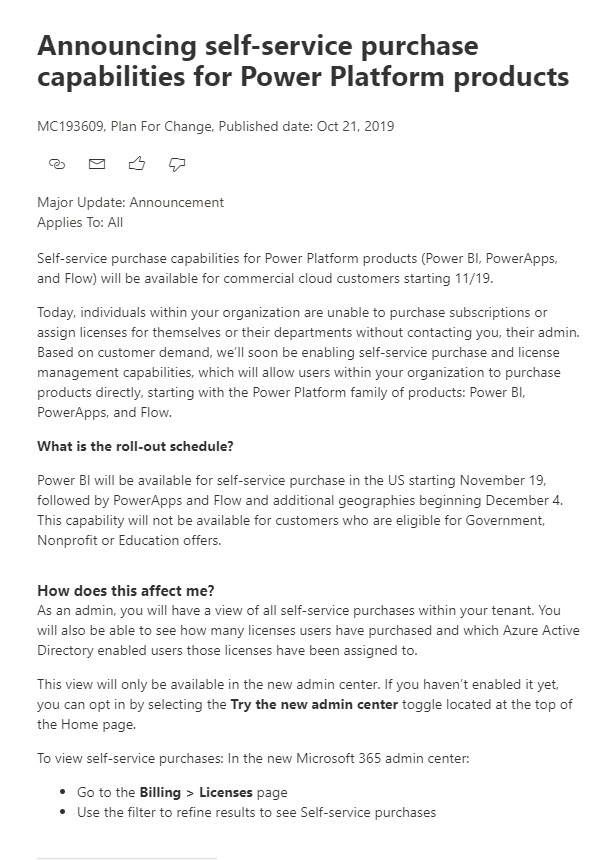 Update: In an update to the self-service purchase FAQ posted on October 31, Microsoft announced that based on customer feedback, they will provide Office 365 tenants with a PowerShell-based method to turn off self-service purchasing on a per-product basis. They also said that the launch date for self-service purchases has been pushed out to January 14, 2020. See this link for other coverage.

Although it is reasonable to seek to maximize revenues from a customer base, I am bewildered at some tone-deaf decisions made by Microsoft in what seem to be thinly disguised attempts to extract more money from Office 365 tenants.

Take the announcement about “self-service purchase capabilities for Power Platform products” made in Office 365 notification MC193609 on October 21 (Figure 1). The title sounds innocuous but means that Office 365 tenant users will be able to buy licenses for PowerApps, Flow, and Power BI using their own credit cards without any input from a tenant administrator. Users who buy licenses are responsible for managing their own billing information and license assignment, which should be fun.

Self-service purchases will start for Power BI on November 19 and for Flow and PowerApps on December 4. Government, Education, and non-Profit tenants are excluded.

The best possible reading of the situation is that this will allow people who want to use Flow, Power BI or PowerApps get their work done without pestering a tenant administrator for help, or that it encourages innovation in the workforce without blocks from administrators who don’t care or don’t want to move forward. While some report negative attitudes from administrators that might support this case, I don’t think that it is the norm.

The way Microsoft sees it, the end user is liberated, and they are responding to “customer demand,” but a quick poll of attendees at the UK Evolve conference in Birmingham this week or the reaction in my mailbox tells a different story. People just don’t like what Microsoft proposes to do.

It’s true that administrators will be able to see details of user-driven purchases in the Billing section of the Office 365 Admin Center. What’s not available is any ability for a tenant to disable user-driven purchases, an omission that seems incredible to me. After all, someone could fall into the trap of buying licenses they don’t need because the organization has already bought licenses but hasn’t assigned them yet. Or, even worse, someone goes and buys Power Platform licenses when the organization has decided to standardize on another non-Microsoft tool.

Given the protests about other situations when Microsoft proposed to communicate with tenant users, like the Teams feedback survey or by offering hints and tips about using Office 365 better, you would have thought that people in Redmond might understand that Office 365 tenants don’t like suppliers contacting end users without prior approval.

A second example comes in MC193448 from October 18. This notification announces the public preview of Microsoft 365 Audit. Reading what Microsoft proposes to deliver I see value in features like “processed insights,” which promise quick answers to common questions posed of audit data. Having “near real-time” access to audit data would also be nice, as is the ability to store audit data for up to a year instead of the 90-day limit used today. Office 365 E5 licenses already have a year-long retention.

But buried in the description, we find:

High value events: high value/volume security and compliance events to power investigations, such as user behavioral analysis. An example is events on mail reads/ accessed which will roll out in next few weeks.

This refers to the MailItemsAccessed audit event announced in January 2019, pulled in April, and supposedly coming back to Office 365 tenants in September. Microsoft’s communication around this feature, which captures audit events when messages are accessed in Exchange Online mailboxes, has been poor. And that’s being nice. Now they’re lining up a feature that Office 365 tenants thought they were getting as part of the set of events captured for mailbox activities and stuffing it into a new package that they’ll charge for.

No one minds paying for value (and storing audit events can consume a lot of storage), but it would be so much better if Microsoft delivered functionality promised for the base software without looking for extra payment.

Ending on a positive note, there’s lots of good things happening inside Office 365 from Outlook Mobile gaining support for Office 365 Sensitivity Labels to the release of the much-awaited SharePoint Online Site URL rename feature. Also, I see that Microsoft now refers to the activity-based implementation of the Office 365 Groups expiration policy as Activity Based Teams Renewal for Teams (now generally available).

All good stuff and a pleasure to report. It would be even better if Microsoft focused on innovation instead of extracting extra cash from customers. Weakening customer loyalty to Office 365 leaves opportunities for G Suite to exploit, especially now that G Suite has a new boss who knows the strengths and weaknesses of Office 365 a tad more closely than Microsoft might like.