Microsoft turns to IT community to help name TechEd successor 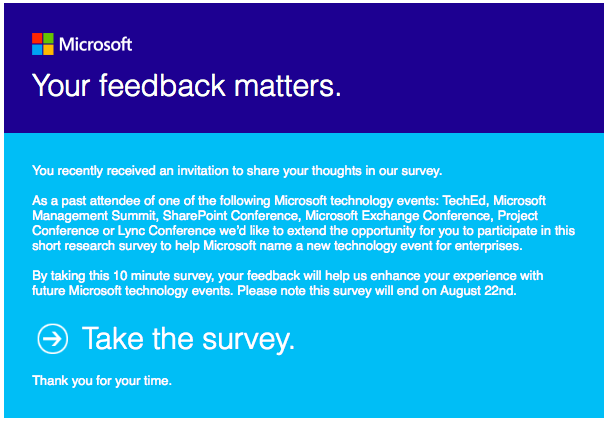 A few weeks ago, Microsoft announced that it was shuttering a number of Microsoft-branded technology events — namely Microsoft TechEd, Microsoft Exchange Conference, Microsoft SharePoint Conference, and a few others — to make way for a new technology event scheduled to take place May 4-8, 2015 in Chicago, IL. At the time, Microsoft was criticized in some quarters for the supposed tentative name of the conference — the Microsoft Unified Technology Event for Enterprises, or MUTEE — but Microsoft indicated that the name wasn’t final.

Earlier this week I received an email from Microsoft asking me to “…participate in this short research survey to help Microsoft name a new technology event for enterprises.” I’ve cut and pasted the relevant bits out of the email in this post as a screen grab, below.

“We polled several thousand past attendees of TechEd, SharePoint Conference, Exchange Conference and other Microsoft events. This isn’t a crowd-sourcing exercise, but it is incredibly valuable to get input and opinions from our customers as we consider the right name for the event.” 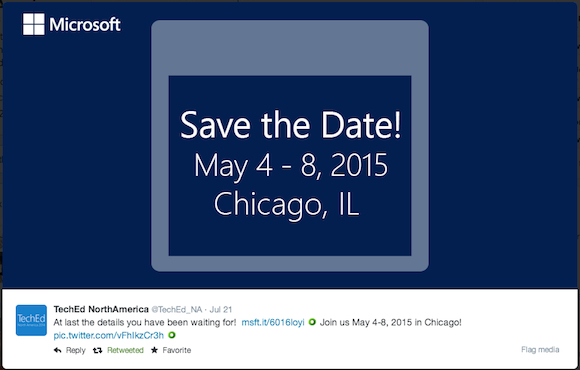 I attempted to complete the survey several times and was politely told that I “…did not qualify for today’s survey.” (See below).

If you attempted to take Microsoft’s online event survey, you may have received an
error message like this one. (Image: Jeff James)

Rod Trent at Windows IT Pro and Mary-Jo Foley over at ZDNet have reported that if you managed to actually take the survey, Microsoft provided a list of suggested names for the successor to Microsoft TechEd for survey participants to chose from, including:

I’m not particularly fond of any of them, but ‘Microsoft Spark’ sounds too much like Microsoft BizSpark, and ‘Microsoft GO’ seems to be a reference to a Chinese board game. ‘Microsoft Unity’ seems too similar to the new IT Unity community site for IT professionals, and none of the others seem particularly memorable.

If they had a write-in or ‘Other’ option, I would have suggested the following, which I think is a fantastic name for a conference that showcases all of Microsoft’s products for enterprise customers: Microsoft TechEd.

If you weren’t asked to take part in the survey, feel free to add some name suggestions of your own by adding a comment at the end of this post.

So did you also receive an email from Microsoft asking you to help them pick a name for the successor to TechEd? If so, please drop me an email with your thoughts, or you can also contact me on Twitter or Google+. You can also catch up on my posts in the Petri IT Knowledgebase forums.