Microsoft Says It’s Time To Dispel Some Cloud Myths. Do The Myths Apply to Office 365? 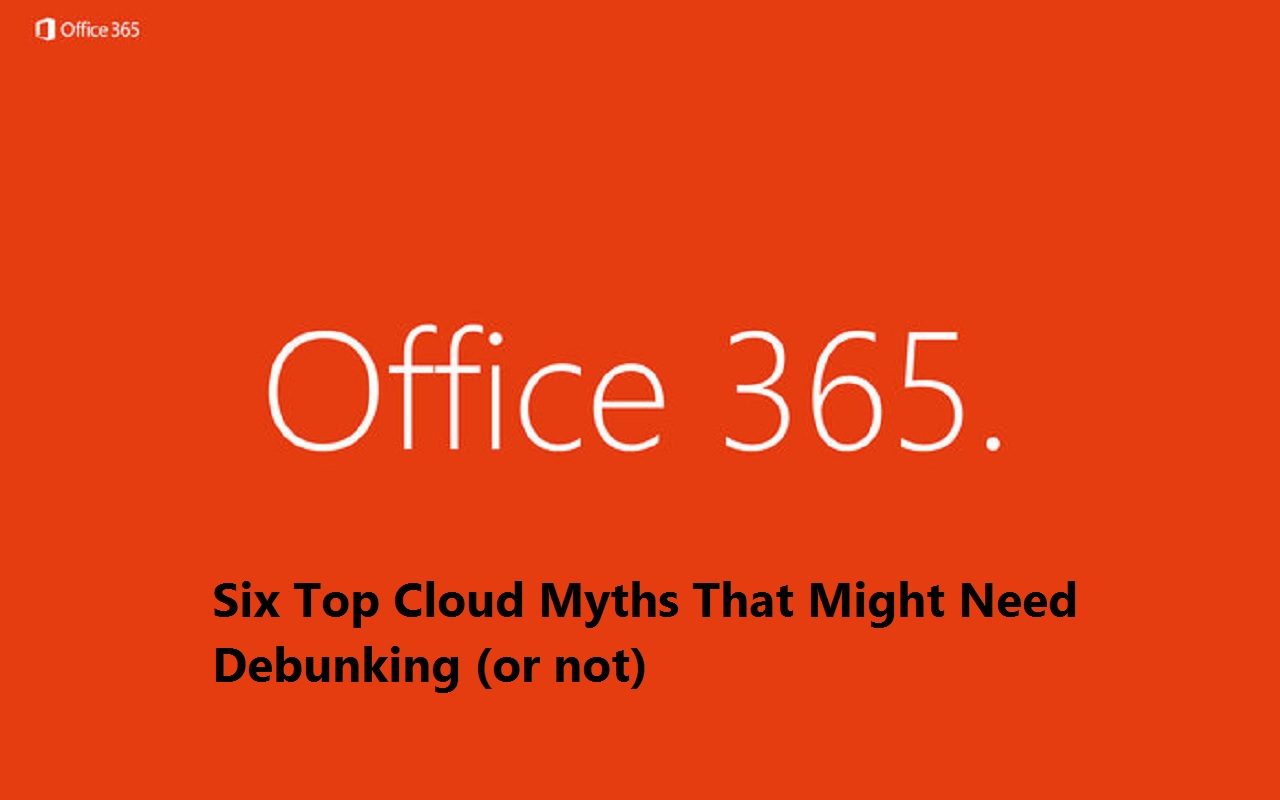 Julia White is the Corporate Vice President for Azure and Security at Microsoft. She’s been around different parts of Microsoft for more years than I care to remember and I respect her opinion. Which then led me to consider her “Top Cloud Myths of 2016” post of yesterday.

The core point made is that cloud services are now very much mainstream. I agree. Cloud is way past the fabled tipping point so beloved of consultants, where a previously rare phenomenon is becoming more common. Cloud services are everywhere; are robust, reliable, and secure; and will take an increasing amount of work from on-premises systems as time goes now.

Now that I have nailed my colors to the mast, let’s consider the six myths that worry Julia, using Office 365 as a test case.

Agreed. Diversity is good, even in the cloud. You don’t have to run Office 365 alongside Azure, but you’ll consume Azure as you use Office 365 simply because Azure is part of the framework upon which Office 365 is built. However, goodness can be gained by using Amazon Web Services as well. Or any other cloud service you care to deploy, assuming that the selected service delivers.

Agreed. There’s no doubt that cloud vendors devote more engineering resources and technology to keeping their systems more secure and more compliant with standards than almost any on-premises infrastructure. They have more security professionals working on keeping the bad guys out than any on-premises deployment could afford to employ. Their attention to detail and their ability to detect and resist new attacks is second to none.

The reason why is that companies like Microsoft and Amazon have no choice in the matter. If a service like Office 365 was to be compromised in any serious way, the damage caused to Microsoft would be immense and their goal of reaching an annualized revenue run rate of $20 billion for commercial cloud products by the middle of 2018 would be put in doubt. That’s enough to concentrate the mind of everyone on the need for security from the CEO on down.

Myth #3: The main benefit of public cloud is efficiency more than innovation

Agreed. It’s another myth. But in this case I think the reason is that the cloud providers are locked in a titanic struggle for supremacy and therefore need to keep innovation up and prices down. New features appear in Office 365 all the time (Microsoft Teams is an example). In this case, Teams is a direct response to a Slack, a cloud competitor.

Efficiency is clearly important too because cloud services can’t run if they are inefficient. But there’s innovation there too as proven by features like Managed Availability or the IP-less DAG that have evolved within Exchange Online to make its operation more efficient and have since been transferred to on-premises customers.

Myth #4: Hybrid cloud is the connection of public and private clouds

Agreed. Hybrid cloud is a reality and it is here to stay. Microsoft has done well in some places within Office 365 to make hybrid cloud a real success. The Exchange Hybrid Connection Wizard (HCW) is one example. SharePoint hybrid search is another.

There are other places where a lot more work is required, like the hybrid experience when Office 365 Groups are synchronized back on-premises as distribution groups. That’s not as good as it should be and needs to be better. But my friends in Microsoft engineering know this because I’ve said it many times.

Disagree. This is not a myth. The longer a company stays using a certain cloud platform, the harder it is to extract themselves from that platform and move elsewhere. If you want to leave Office 365 and move to Google G Suite, you can probably extract your mailboxes and SharePoint documents, but good luck in extracting plans, team chats, or any of the metadata that is wrapped around objects and interpreted to bring intelligence to users through applications like Delve and MyAnalytics.

Microsoft says that the data held inside Office 365 belongs to a tenant. So it does, but it’s bloody hard to extract the data in a useful and meaningful way. Lots more needs to be done here before we can say that vendor lock-in is a myth.

Myth #6: Open cloud development is a risk to innovation and intellectual property

Agreed. Everyone gains by sharing components. All of the software development companies that I am involved in use open source technology and none seems to be affected by the experience. Development is faster, less risky and more productive when you build on tried and tested components. It’s just logical.

I agree that five of the six myths advanced by Julia are so much hot air (like much surrounding the cloud?). But that doesn’t mean that people should consider these to be done deals that no one has to care about in the future. Microsoft and other cloud vendors absolutely need to concentrate on security, on avoiding vendor lock-in, on openness and transparency, and on improving hybrid infrastructures to achieve seamless interoperability in as many use cases as possible. If not, those who hold to the myths will continue to believe them. And that can’t be a good thing.