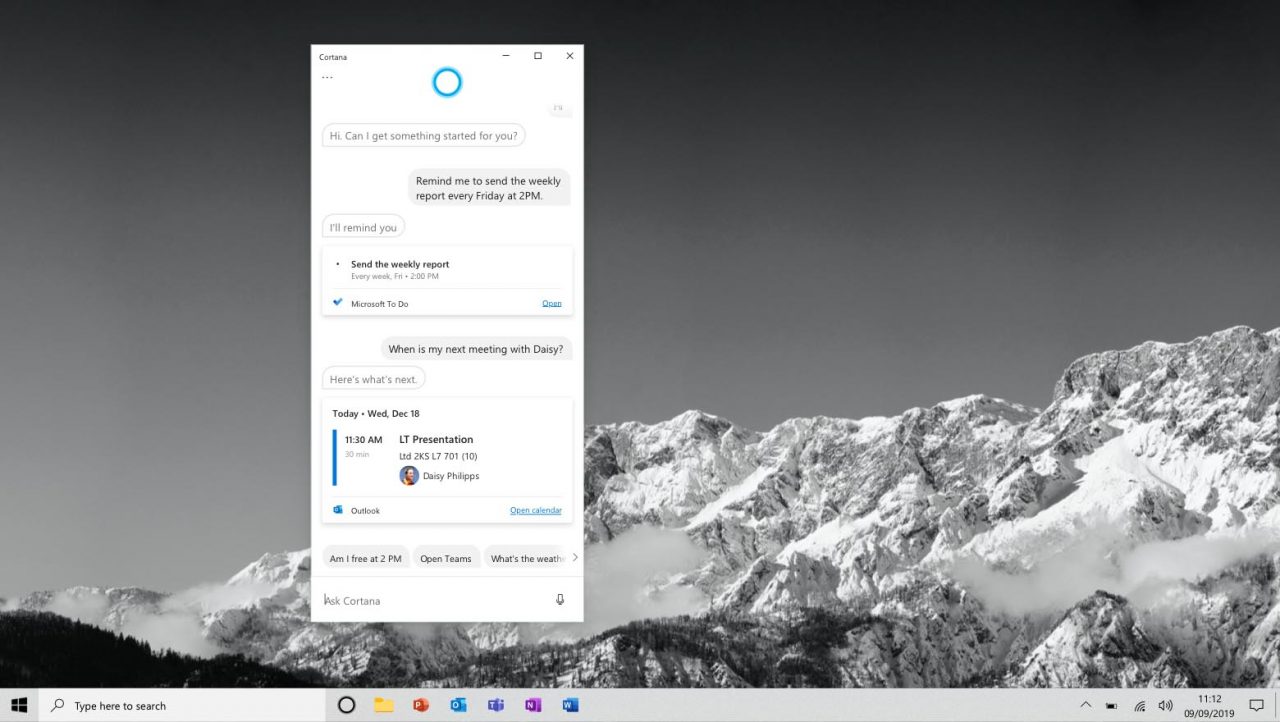 Last week, Microsoft made a significant announcement: the company is changing the role of Cortana. Rather than being a general-purpose AI bot like Alexa or Google Assistant, the bot is moving explicitly forward as a productivity assistant.

Considering that Microsoft’s marching orders are all about improving productivity, this isn’t a big surprise. The company’s digital assistant found itself as an orphan once Windows Phone was shut down and its usage on iOS and Android devices is anemic according to those familiar with its usage in the US.

Internally, Microsoft has been referring to Cortana as the “Microsoft 365 assistant” for some time and frankly, I wouldn’t be surprised to see the assistant publicly rebranded as well. ‘Cortana’, which is a character from the company’s Halo games, doesn’t make much sense anymore. And considering how hard the company is pushing Microsoft 365 and that they are now pivoting Cortana to productivity, the Microsoft 365 Assistant becomes a more logical name.

Late last year, Microsoft announced the Surface Earbuds and then a few weeks later, said that the hardware was delayed; the Earbuds are currently expected to arrive this spring. It is my understanding that the reason for the delay was software related as the productivity features for the new hardware were not ready to be released.

Microsoft showcased how you can use the Earbuds to move between slides and the company has other functions that would pair with this messaging as well; specifically the ‘Play My Emails’ feature. According to people familiar with the company’s plans, Microsoft is looking to expand ‘Play My Emails’ with new features under a ‘commute’ banner.

The idea is that with the Earbuds (and presumably Surface Headphones or other headsets) you can have Cortana/Microsoft 365 assistant, play your emails, read your calendar for the day, and other audible interactions with your agenda while heading into work. Further, it can help identify when you actually need to pull out your phone by saying if an email/presentation/pdf has a lot of visual content.

Along with expanding the Play My Emails feature, Microsoft is testing an expanded role inside of its popular Teams application. The company is working on adding new features to Teams that would allow Cortana to send files, create chats, present content while in meetings and quite a bit more. The company is experimenting with the location to add Cortana into the application but it may end up landing in the search bar at the top of the window.

While the pivoting of Cortana was inevitable, and I do hope that the assistant is rebranded, this path forward is sustainable for Microsoft as Cortana can once again add value where others can’t. Siri, Google Assistant, and Alexa will continue to rule the consumer landscape but Microsoft is primed to own the productivity market as its digital assistant has the exclusive ability to dance around the wealth of data accessible within the Office 365 graph.