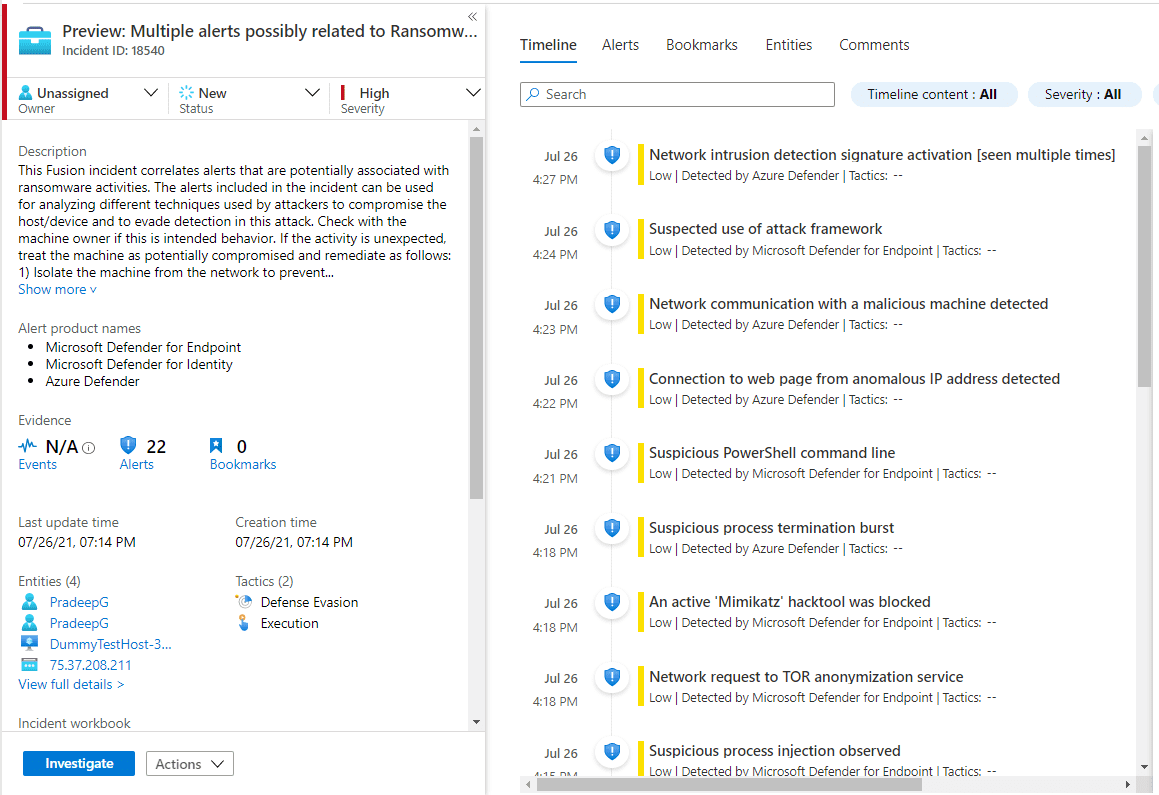 Earlier this month, the Azure Sentinel and Microsoft Threat Intelligence Center (MSTIC) teams announced the public availability of ‘Fusion detection for ransomware’. Fusion is designed to automatically correlate security alerts that could be related to ransomware. More precisely, Microsoft said the Fusion machine learning model collates alerts detected in a specific timeframe during defense evasion and execution stages of a ransomware attack.

Once collected, the events are surfaced as a high severity incident, called “Multiple alerts possibly related to Ransomware activity detected”, in the Azure Sentinel workspace. Automating the detection and collection of such events helps security analysts quickly identify potential attacks and act to stop them.

Fusion gives analysts a complete picture of the detected activities on a device, and it collects signals from several Microsoft products, and from the network and cloud. Microsoft says that Fusion supports the following data connectors:

Ransomware is the number one security threat

According to a report released by PurpleSec, ransomware attacks cost organizations 23 times more in 2020 compared to 2019. And ransomware cost a total of $20 billion in 2020, with downtime caused by ransomware increasing more than 200%.

Prevention is always better than cure, but with the rise of ransomware as a service, the scale and complexity of attacks are increasing. Hackers are resorting to slow and stealth techniques to evade detection.

To combat this trend, Fusion is designed to detect malicious activity at the defense evasion and execution stages of an attack. Fusion helps analytics quickly access the information they need to understand the complete picture and act to stop an attack in its tracks. And most importantly, stop ransomware spreading to multiple devices on a network. Microsoft puts it like this:

The sooner such alerts are raised to security analysts with the details on various attacker activities, the faster the ransomware attacks can be contained and remediated. A detection like this will help analysts by giving the compilation of attacker activity around execution stage helping reduce MTTD (Mean Time to Detect) and MTTR (Mean Time to Respond).

If Fusion surfaces a multi-stage event in Azure Sentinel, analysts should ask the device owner if the behavior detected is intentional. If not, the device should be deemed potentially compromised and isolated from the network.

Microsoft would like its clients to provide feedback on Fusion incidents. There’s the option to indicate whether an incident was a true positive, benign positive, or false positive. The more information Microsoft can collect about incidents surfaced by Fusion, the better it can train its machine learning model.