Several years ago, in August of 2013, Slack made its grand debut. The application was well received in the small business and startup community and quickly grew to find fans in the enterprise segment as well.

Today, Microsoft is releasing its take on a modern communication platform that it is calling Teams and to say it has been well received, is an understatement. With more than 50,000 organizations now using the software and 100 new features added since the software was released in beta late last year, Microsoft Teams is now available to more than 85 million Office 365 users.

What helps separate Teams from all of Microsoft’s other productivity applications like Skype, Groups, Yammer, and Email is that this tool acts more like a hub for teamwork than a single, task focused application. What I mean is that from inside the app you can chat, video call, collaborate, share content, create threaded conversations around a single task or a channel around a single objective, and a lot more. 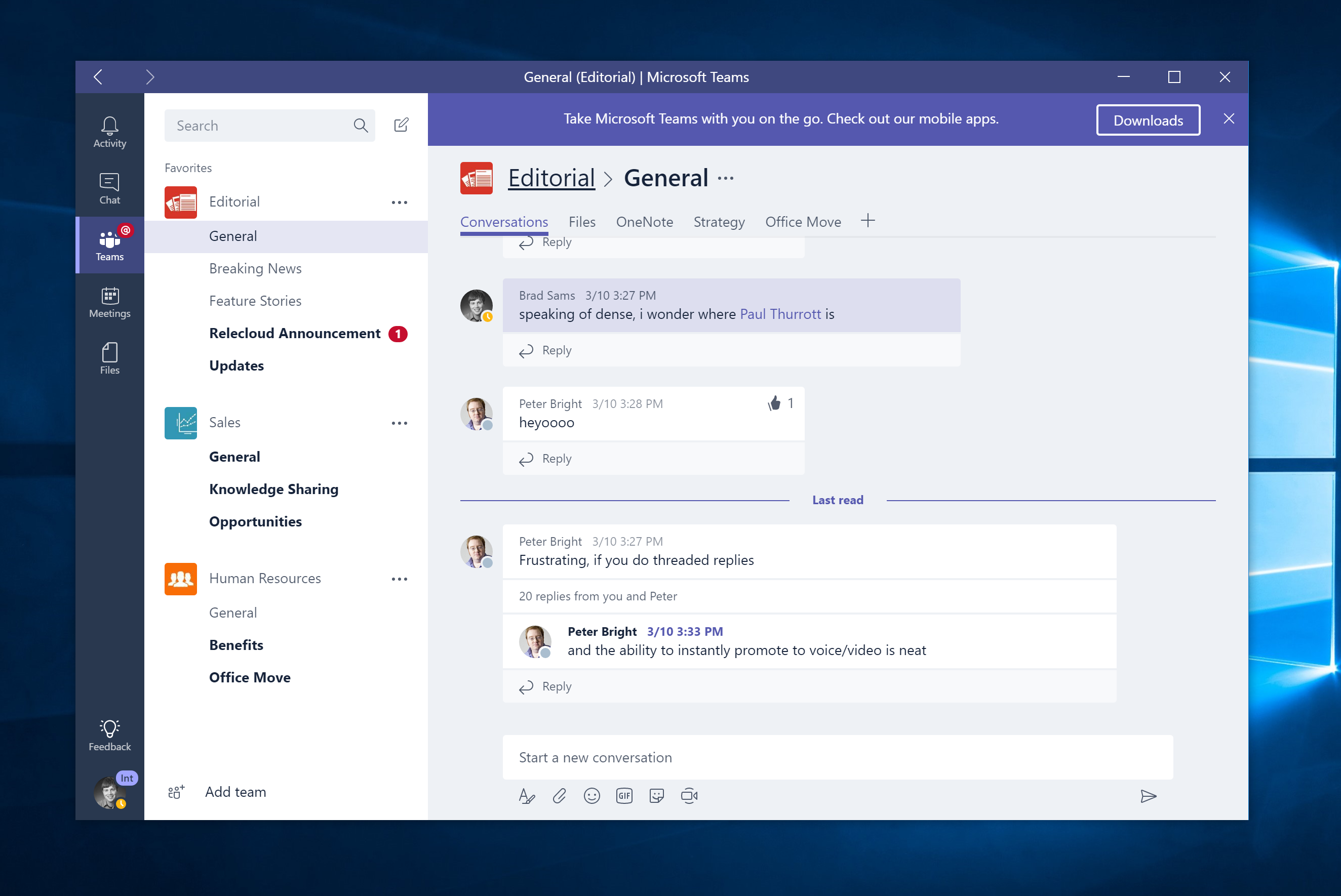 Sure, this may sound familiar, but it’s the way that Teams integrates with other Office 365 content like OneDrive and allows for third-party plugins out of the box to bring everything you need into one application that makes Teams different than Microsoft’s other products.  It’s possible that you could, if your company fully adopted the platform, no longer need to open email or Skype and work entirely in Teams.

While that scenario is unlikely as it’s quite difficult to fully move away from email, it’s entirely plausible that Teams can cut down on the noise in your inbox and help de-clutter your workflow.

The platform is far from perfect, as of right now you can’t add guest access, although the company says that feature is coming in June and there is not a free version for you to try out today. Also, it requires your co-workers to go all in on Teams, otherwise the experience breaks down; either all communication happens inside the platform or none of it. If you have some people using the threaded conversations to track progress and other co-workers using traditional email, the value of Teams is lost.

Since the day slack was announced, it was speculated by nearly everyone who follows Microsoft that the company would buy the startup to quickly take the market share the company had obtained. When Microsoft made the decision to build their competitor internally instead of buying a competitor, it was met with heavy skepticism but after using the app and interviewing users who have deployed the application, it was the right move.

For companies that are currently using Slack and also paying for Office 365, Teams offers a compelling alternative that has enough features today that you can begin the process of moving platforms without a loss of productivity. Additionally, because Teams is part of Office 365, you can save a bit of money as well since the app is included for free with most tiers of the productivity suite.

Teams has quickly matured into a product that fits exceptionally well in the Office 365 portfolio. With the software now available in 181 markets and in 19 different languages, it’s worth giving Teams a spin if you are using Slack today, or have thought about using it in the past.