Windows 10 is a little over six months old and the OS is being adopted quickly around the world. With over 200 million machines now running the OS, the platform is being well received by consumers and corporations.

The OS also passed another milestone in the month of January, Windows 10 is now on more machines than Windows XP. Even though Windows XP is no longer supported by Microsoft and its market share is quickly shrinking, for many years, it was the most widely used operating system on the planet. 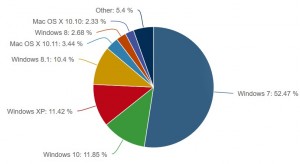 For the month of January, according to Netmarketshare.com, Windows 10 was used on 11.85% of machines while Windows XP was installed on 11.42% but Windows 7 still remains the juggernaut at 52.47%. Windows 8/8.1 is still on 13.08% of devices but expect Windows 10 to surpass that mark next month.

With Windows 8 being shunned by consumers and corporations, Windows 7 is the long-term roadblock to preventing Windows 10 from becoming the most widely used version of Windows. For those that have remained on 7, they have typically done so as the platform is rock-solid and offers the basics needed for a modern machine. But, it does lack the Windows store, support for Hello and many other security features that have been developed with Windows 8 and 10.

Windows 10 will turn one on July 29th, 2016 and it will be interesting to see if Microsoft can keep up its adoption momentum which would put the total install base around 400 million devices. The company has publicly stated that they hope to have one billion machines running the operating system within three years.