Now that Windows 10 supports running several different Linux distros, Microsoft has added a flag to NTFS that forces the file system to recognize files and folders that are only different by case differently. In this Ask the Admin, I’ll show you how to enable the flag on a folder and explain why you might need this feature.

Recently, I have been doing a lot of work with Linux. But not because I’m abandoning Windows. Quite the opposite. I’ve been using Linux because Puppet Enterprise uses it for its master server. If you are not familiar with Puppet, it is a configuration management system popular for managing servers in DevOps environments.

The main reason to look at Puppet instead of PowerShell DSC is that Puppet is a more mature solution and has better support for managing Linux. Many environments use Windows Server and Linux, so a configuration management product that can manage both equally well is a bonus.

If you missed my two-part article on configuring Puppet Enterprise in Red Hat Linux running in a Hyper-V virtual machine, you can read both parts here:

If you are interested in learning how to manage Windows Server using Puppet, here are links to the seven parts published so far:

One of the frustrating aspects for Windows sysadmins working with Linux is that unlike Windows, Linux is case sensitive. For example, code in a Puppet manifest might not work if you don’t use the correct case for the first letter of a parameter. More fundamentally, when working with files and directories in Linux, puppet.conf is not the same as Puppet.conf. Linux sees these as two different files.

This difference in behavior can cause problems when using the Windows Subsystem for Linux (WSL) in Windows 10. WSL provides a layer for mapping Windows kernel system calls to Linux kernel system calls, allowing Linux binaries to run in Windows unmodified. WSL also maps Windows services, like the filesystem and networking, as devices that Linux can access. 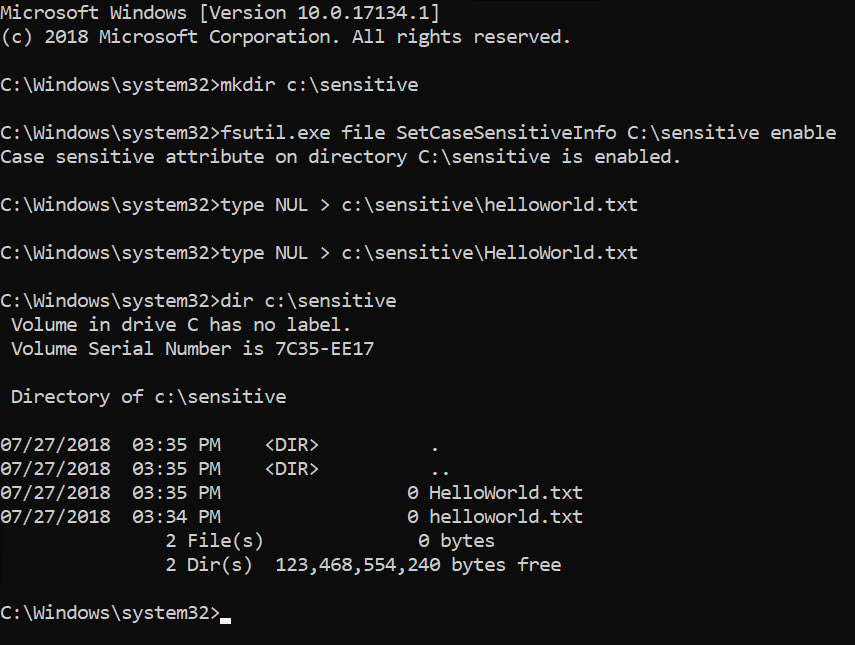 That’s it! If you want to disable case sensitivity support, run the fsutil command again, replacing enable with disable.

In this Ask the Admin, I showed you how to enable NTFS case sensitivity support for use with the Windows Subsystem for Linux.