The New History Menu in Teams will Simplify Navigation 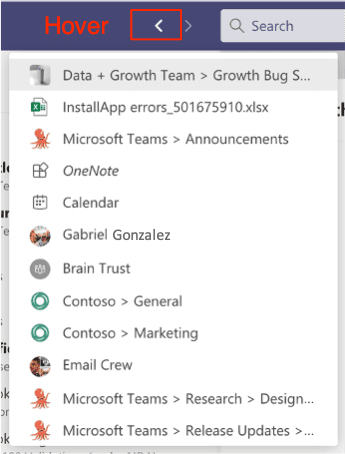 We have all been there, you were working on a file or having a conversation and you click away only to forget exactly where you were inside the Teams app. Was it in the calendar, Teams channel, or a conversation?

Trying to go backward in time on a PC is something that, despite not being possible in the real world, can be achieved digitally. We have shortcuts like Cntrl+Z to undo an action and Cntrl+Shift+T to bring back a tab in Edge/Chrome that you closed and now Teams is joining the party with a history menu to make going backward a little bit easier.

As the name suggests, this new history menu will make it easier to go back to a specific item “that thing you were previously working on” and it is coming soon. Microsoft says that this feature (MC234245) will start rolling out in early February and should be complete by the end of that same month.

Today, you can hit the back button to move to previous items but it’s a bit of a blind leap. You may not know exactly how many times you need to click to get back to the specific file or location but this menu will make that process much easier to quickly navigate to your intended target.

To access the menu, you will hover over the back arrow at the top of the Teams window near Search. When you hover, a menu will appear that shows a drop down of everything you have been working on or accessing recently and allow you to jump to that spot.

This is a small update to Teams but one that I think many will find useful. I have found myself living inside of Teams for a majority of my productivity-work and having the option to quickly go back to a previous tab/channel/document will be a big help.

What is not listed here but I hope it does arrive with this update will be a keyboard shortcut. I would be surprised if there is not one but as of this post, Microsoft has not stated what it will be when this feature arrives.