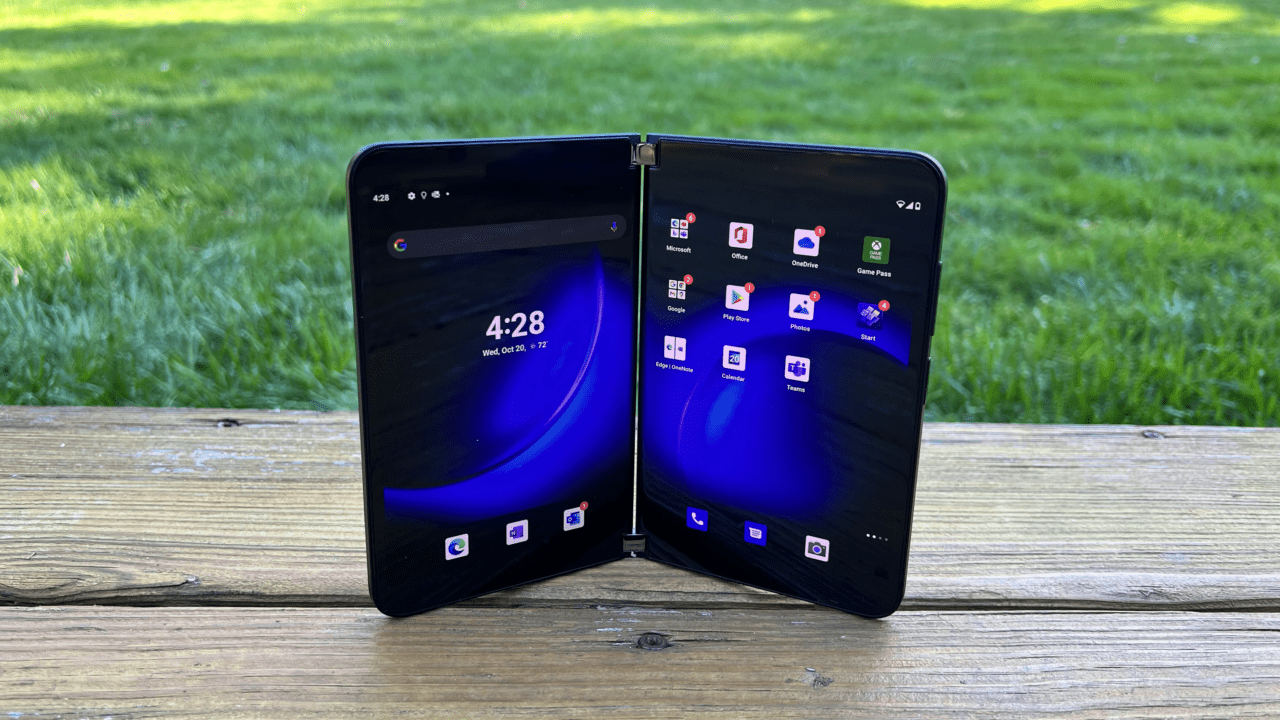 The Surface brand is full of products that tried something different. The classic Pro put a different spin on a tablet, the Studio with a twist on the desktop, and then there is the Duo, the two-screen foldable that is Surface in name but it does not run Windows.

When I took a look last year at the Surface Duo, it was a field trip down a lane of “what ifs” – could Microsoft build a modern PDA, a dual-screen device, could they build an Android phone, and could they make it Surface? The company was putting the Surface brand on the line to create a pocketable device that they hoped would steal some of the industry’s limelight – with the Duo 2, they are back in (nearly) black.

So here we are, looking at the Duo 2 that is improved in nearly every way from its predecessor. Much like the Surface Pro 8, Microsoft took everything they heard from customers and applied it to the product. This is a good thing, as the Pro 8 got the update it needed and the Duo 2 follows a similar path.

This means you get a Snapdragon 888 processor, triple camera arrangement, 5G, better displays and the list goes on and on. This feels more like an overhaul than a refresh but you are not here to read a spec sheet, you’re an IT Pro wondering how this can fit into your workflow…how can the Duo 2 make your day better – that’s why you are here.

And that’s the lens of this first look at the Duo 2. I have had the device for about a week but as with all products, a longer review is necessary as some gremlins don’t show their face until a few months pass (like the lack of Android updates for the original Duo).

First, let’s get a couple of things out the way – the best improvement is the CPU upgrade. Yes, the displays are bright and crisp, the cameras are better, but one of the biggest complaints about the Duo was that you were paying a premium for outdated specs. That’s no longer the scenario with the Duo 2, you are getting modern specs, and that 888 hums along with the Duo 2 showing minimal slowdowns in performance.

Like most things Android, performance hiccups do show up on occasion when navigating across the UI but it’s not anything I am worried about for the long term. And for most users, you will likely not notice them either; we are taking edge cases, not the primary navigation.

Keep in mind that this device is not cheap, starts at $1500, but it’s in line with other foldables. That being said, you should research contently to make sure this is the right product for your environment.

Like the first Duo, the Duo 2 is excellent for working with Microsoft 365. It integrates easily into your workflow with all of the Office apps and being able to keep the text on one display while triaging tasks on the other is quite helpful. It’s not hard to imagine the scenario of a late-night notification to reset passwords in Microsoft 365 and with the Duo 2, you can have a list of those users on one display and reset passwords on the other.

In my time with the Duo 2 and the Duo last year, my opinion evolved over who I think should buy this device. And because Petri is for IT Pros, the Duo 2 is the optimal on-call piece of hardware.

Initially, I looked at the Duo as a modern PDA and that holds true as it makes it possible to be more mobile while still keeping your productivity needs available to you at a moment’s notice but that can be refined. What I am trying to say is that – first off, on-call IT Pros, never use your personal phones for this role – the Duo 2 should be a candidate for employer-provided phones for on-call employees.

Hear me out on this as it’s a good phone, its features are baked into Microsoft 365, it supports bio authentication with a fast fingerprint reader, it’s easier to execute complex tasks on than an iPhone, and it has fast connectivity – but it’s not the best casual use device. The Duo 2 is a dedicated, two-hand device, without question.

If you are giving phones to on-call employees, why not give them a device that is specifically designed for enhanced productivity? That’s the Duo 2, it’s better at productivity than other pocketable devices, but it’s not the best “phone” if that makes sense.

The triple camera setup is significantly better than the camera that shipped on the first-gen Duo. It’s not nearly as good as an iPhone 13 Pro but again, if you are using it to take pictures of a broken laptop, it’s more than acceptable.

But it’s also worth pointing out that while the camera is better than last year, it comes at the expense of a significant camera bump that was not on the first-generation device. Given that every modern phone has a camera bump on the back, you can’t fault the Duo for replicating that style but it does detract from the overall aesthetics of the hardware. But what you lose in form, you gain in function as not only does it take better pictures, it’s also easier to pick up off a table since it is raised up thanks to the camera bump.

It’s also a bit awkward to take photos with as well. Because the device must be open like a book, it’s an uncomfortable posture and it’s worth pointing out that the camera app did crash on me twice with an error (4) crash report. You can see a sample photo below that is good, but not great. Despite trying to get it to focus on the edges of the leaves, it felt like it was hunting for another object and lost some details in the process.

One of the best updates to Duo 2 is being able to view if you have notifications with the device closed. The side-view system that Microsoft has created with this piece of hardware is a small bit of delight when you first experience it and it enhances the usability of the hardware. You can see basic information about missed calls or the time – it’s not a hero feature by any means but a unique adaptation because of the form-factor of the hardware.

Battery life is also good and I had no issues getting through an entire day on a single charge. When you do need to plugin, you’ll appreciate the fast charging capabilities but note that the device lacks a charger in the box. There is also no wireless charging which is a letdown as this means it cannot be easily charged in my car.

I still don’t think that the Duo 2 is a mass-market device but it certainly has its niche applications. But I would say this about nearly all foldables, they are still niche devices but their appeal to a wider audience appears to grow with each generation.

Like the last generation device, the Duo 2 feels well built and the hinge provides confidence that it will not break easily. Of course, durability is a test for time, not a few days of usage. And because of the camera bump and slightly gapped hinge, when compared to the first generation Duo, this device is larger than its predecessor.

For the IT Pro who is looking for the best productivity device that can fit into their pocket that works well with Office, this is a natural fit. For the enthusiast who wants a premium piece of hardware and likes Microsoft, the Duo 2 is a good choice thanks to the significantly improved internals.

But the biggest unknown with the Duo 2 is not what you get in the box today, it’s what software will be coming down the pipeline tomorrow. Because the hardware you pull out of the box is quite good – it checks most of the boxes to round out a solid upgrade to the first Duo. But if OS updates are going to be anemic in their release cadence or upgrades to new version of Android are going to be a year behind the market, then that’s a big turnoff for enthusiasts.

This is why this might be one of the best devices available today for IT Pros who fall into that “on-call” territory. The latest updates don’t matter, productivity does, and the Duo 2 nails that scenario time and time again.

And saying that this device is a good productivity companion is one thing but using it that way is another. I wrote this entire review on the Duo 2, edited my post on the Duo 2, and published it from the CMS using the Duo 2. It’s not a laptop replacement and editing photos can get a bit tricky in a CMS but the workflow of outline, write, edit, upload, and eventually publish, can be done with the dual displays.

The Duo 2 is not perfect but it’s also unique and while the OS is not Microsoft’s, it embodies the spirit of the Surface brand well. For the right user, especially an IT Pro who knows how to get the most of the dual-screen arrangement, it’s much easier to recommend the Duo 2 to that user as the hardware specs should keep the device running smoothly for years, even if the software updates never arrive.