Syncing Updates from the Microsoft 365 Admin Center to Planner

Making Sure Office 365 Notifications Are Tracked

Planner is the Office 365 workgroup task application. Plans are organized around Office 365 Groups (or Teams) and a group can have one or more plans. Each plan is broken down into individual tasks, which can then be organized into different buckets. Planner doesn’t have the full-blown planning smarts built into Microsoft Project, but it’s more than enough to organize the work needed to get small projects done.

In the past, Microsoft has rightly been criticized for failing to communicate Office 365 changes to tenants. Things have improved, but it’s all too easy to miss a notification about something important posted in the Microsoft 365 Message Center. This has led some Office 365 tenants to build their own methods to extract information about new messages using the Office 365 Management Activity API, one of the Microsoft Graph endpoints. It’s reasonably easy to build a PowerShell script to grab message center updates to format and display the information or post to a Teams channel, an Office 365 group, or in email – or even to Planner. Figure 1 shows what I created in a script that took less than an hour to write.

Although you can still go ahead and build your own tool, Microsoft hopes that this integration makes that kind of work unnecessary.

Steps in the Planner Integration

The processing done by the Planner integration is straightforward:

Setting Up the Planner Integration

To setup or change settings for the integration, select the Planner integration link in the Microsoft 365 Message Center (the link appears when your tenant is enabled). Microsoft expects the integration to be available in public preview in May with general availability later in 2020.

The first step is to select the target plan. In Figure 2, I’ve opted for an existing plan that I was already using to track updates. I’ve opted for new tasks to be created in a new bucket. Later, when I review the tasks, I can move them to buckets created for each major Office 365 app, like Exchange Online, SharePoint Online, Teams, and so on. 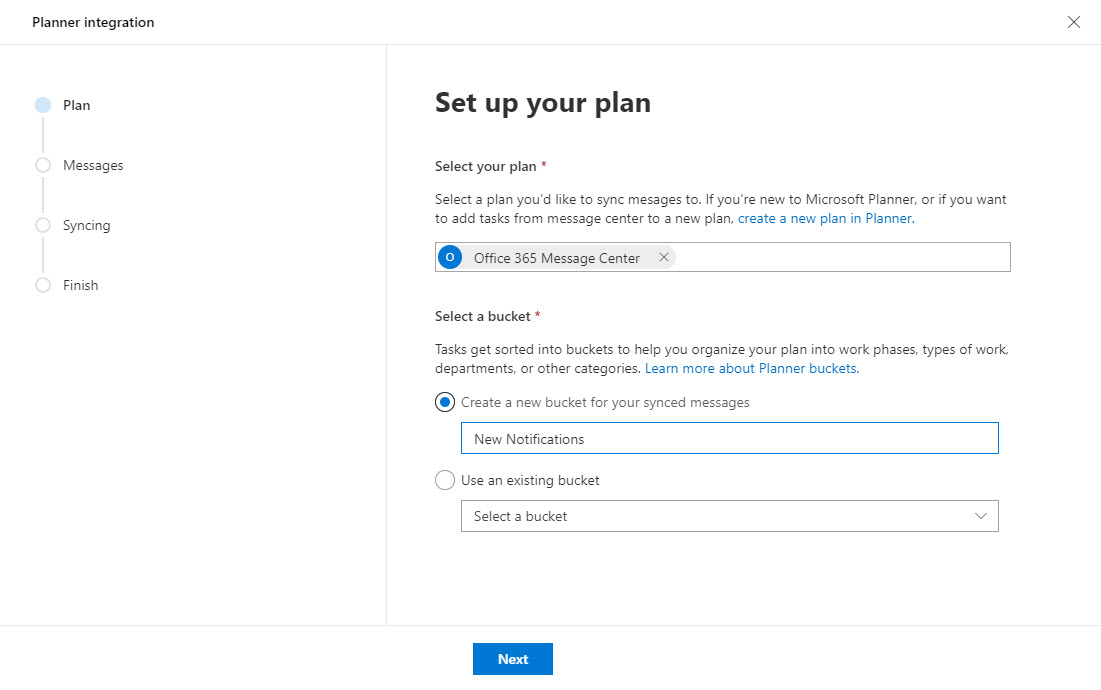 Next, we decide what to synchronize (Figure 3). Reflecting the number of apps in Office 365, Microsoft publishes a wide spectrum of different updates. You can decide to limit what’s synchronized to Planner or take everything. My tenant usually sees a couple of updates daily, so I decided to take everything. Later, if too much information shows up in Planner, you can tune the synchronization settings. For instance, you might decide to drop updates for applications you don’t consider important.

The last step is to decide how synchronization should occur (Figure 4). I choose to synchronize automatically whenever messages are viewed in the admin . Microsoft says that this mechanism is only temporary, and synchronization will happen based on a schedule when the integration is in public preview. For instance, the integration will be able to fetch messages on a daily or weekly basis at a specific time.

The second option allows an administrator to renew new items in the message center and read some before invoking a manual synchronization. Only new items that haven’t been read are synchronized.

My synchronization is set up to create new tasks in the New Notifications bucket. As mentioned earlier, as new tasks arrive, I review them, assign them to someone responsible for taking care of each task, and move them to a more appropriate bucket. Some tasks are removed because I don’t consider them important for the tenant (I take these tasks into account to fine-tune the Planner integration settings) and some are marked as completed or assigned an end date. Figure 5 shows how the tasks appear after some are assigned and updated.

An example of the information used to create Planner tasks is shown in Figure 6. The synchronization populates tasks with the following:

In Figure 6, I’ve edited a task to assign it, added a due date, and marked the task as being in progress. It’s also a good idea to adjust the start time to the date when you think the change will become available in your tenant. This will make Planner’s schedule view much more useful because you’ll see updates when action is due rather than when Microsoft posted the notification. You could also add whatever other information you wish, such as some commentary on what the change means for your organization. Tasks edited in Planner are not synchronized back to the Message Center.

From time to time, Microsoft updates message center notifications as new information becomes available about a change. This can result in duplicate tasks appearing in Planner. It’s an issue that’s easily dealt with by removing the older task and focusing on the updated version.

There’s not much to complain about for the Planner integration in the Microsoft 365 Message Center. It works, tasks are created in Planner, and once the tasks are in Planner you can do whatever you want with them. And all without writing a single line of code.