This article is the second in a series about Network Address Translation (NAT). In the first article, Introduction to Network Address Translation, I went over the basics of the purpose of NAT along with some of the different methods of implementation. This article takes a look at how to put these different methods into practice, including several examples.

In the “Introduction to Network Address Translation” article, the first thing that was discussed was static NAT. With static NAT there is a one-to-one relationship configured between an inside and an outside address. The image below lays out the scenario as shown in the initial article.

There are three main commands that are required to configure this. An overview of these commands and the steps to follow to utilize them  are shown below in Table 1.

The second thing that was discussed was dynamic NAT. With dynamic NAT a pool of addresses is defined that can be used by any number of inside hosts; once this pool is exhausted, however, the next host attempting to send traffic outbound will be denied. Below, the image shows the scenario as referenced in the initial article. 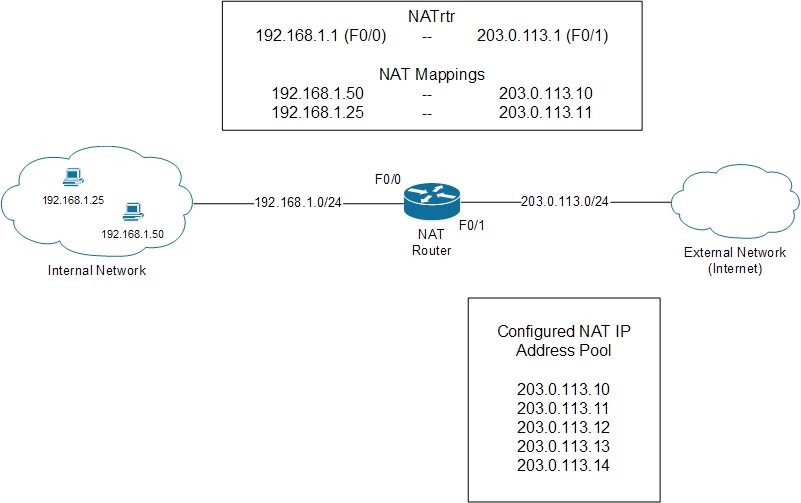 There are a few differences between the commands to configure static and dynamic NAT. The commands and the steps to follow to utilize them are shown in Table 3.

The final thing that was covered was overloaded NAT, which is also referred to as Port Address Translation (PAT). Overloaded NAT works similarly to dynamic NAT except instead of assigning a one-to-one IP address translation from a static IP address pool, overloaded NAT uses different port numbers along with pool IP addresses to allow a much larger number group of source hosts to be translated. There are over 65,000 ports that are available with each pool IP address, and overloaded NAT assigns one of these ports for each connection coming through the NAT router (matching the ACL). Most people don’t realize this, but the majority of broadband connected homes use overloaded NAT on their small home router/gateways (think Linksys and Dlink).

There is one difference between the configuration of dynamic NAT and overloaded NAT, which includes the addition of the overload parameter to the ip nat command. Figure 3 shows the scenario that was displayed in the in initial article. 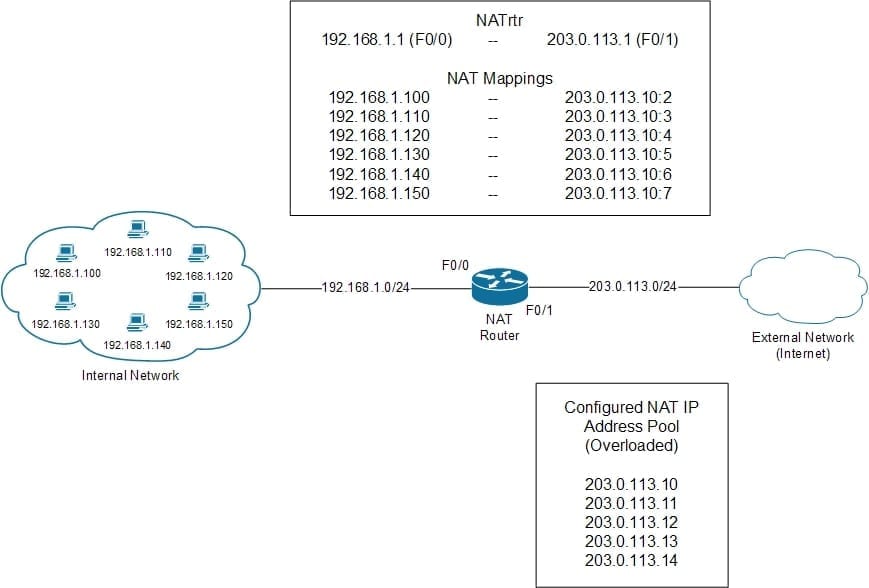 Following the commands shown in Table 3 and adding the Overload command, the configuration to match the contents of Figure 3 can be developed – these are shown below in Table 5.