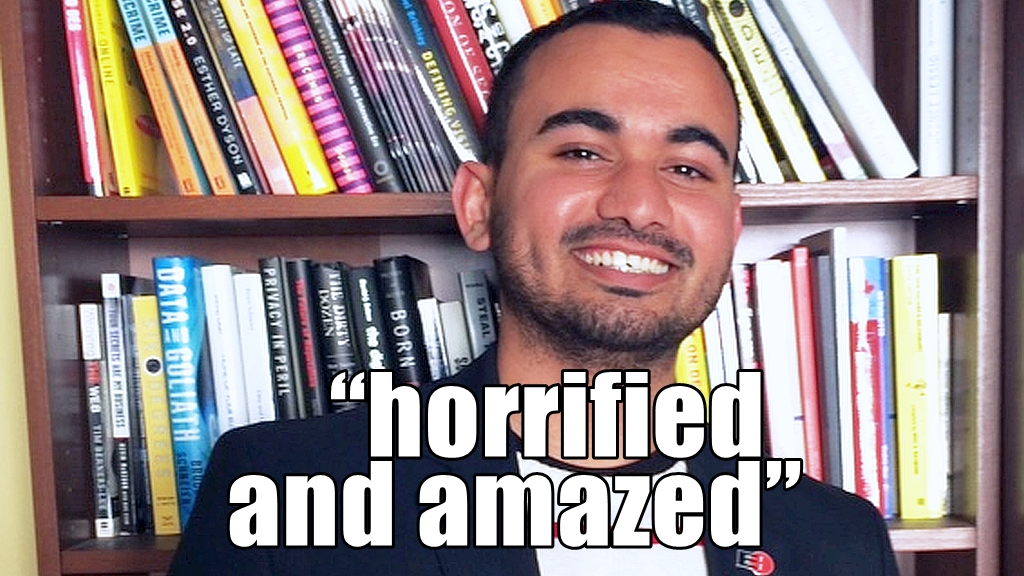 Despite acknowledging previous press stories were wildly incorrect, EFF paralegal staffer Amul Kalia argues his case with sincere passion. He says Microsoft “disregards” privacy, and that the company isn’t transparent about data collection. He even goes as far as to predict Microsoft might face “government investigations” over the issue.

Oh what a tangled web. In today’s IT Newspro, we dive deep into the mire.

Your humble newswatcher curated these news nuggets for your entertainment. Not to mention: Cycling hundreds of ,miles in VR…

In a signed editorial, a staffer from the [EFF] criticized [Windows 10] privacy defaults. … The EFF [is] a nonprofit 501(c)3 organization. [It] accuses Microsoft of “disregarding user choice.”
…
The editorial is especially critical of Microsoft’s telemetry collection. … Amul Kalia…isn’t a member of EFF’s legal staff. [His] criticism of telemetry collection also faults Microsoft for setting the default to the highest level and …for offering the “no telemetry” option only to enterprise customers.
…
The EFF also acknowledges that some media criticism [is] “misinformation and hyperbole.” … Ironically, privacy should be a competitive advantage for Microsoft, given its competitive position with Google.

On the other hand? Cory Doctorow speaks of brutal privacy breaches:

Windows 10 [is] the most control-freaky OS to ever come out of Redmond. [A] spectacular privacy dumpster-fire…burns at the heart of Win 10. … By running Windows 10, you invite Microsoft to collect (and retain) enormous amounts of information…with no way to turn the worst of it off.

So what does the EFF have to say for itself? Here’s Amul Kalia’s Deep Dive:

You don’t need to search long to come across stories of people who are horrified [at] how far Microsoft has gone. … Users of Windows 10 should be aware of…some real concerns.
…
Windows 10 sends an unprecedented amount of usage data back to Microsoft. … While users can disable some of these settings…your computer will [not] stop talking to Microsoft’s servers.
…
Microsoft insists that it aggregates and anonymizes this data. [But] it hasn’t explained…how. [And] unless you’re an enterprise user…you have to share at least some of this telemetry data. … There’s no way to opt-out.
…
Microsoft should come clean…and offer real, meaningful opt-outs. … We urge Microsoft to listen to these concerns.

Ouch, that’s gotta hurt. But ace alliterator Paul Thurrott was one of the first to pour cold water on the organization’s stance:

If you understand the…EFF [thinks] “paid software baaaaaaadddddd,” then you won’t be shocked to [read] this misbegotten mess of misinformation. … Sigh.

Windows 10 is…not the OS to choose…to control how much babbling your OS does over the network. [It] is annoyingly chatty…even when the operating system is configured to be as quiet and private as possible.
…
[But] the general response out of Redmond has been to tap dance. … Microsoft has made some modest changes [but] has continued to [say] nothing is wrong. … More than a year after launch…Microsoft still…isn’t actually listening to its customers.

So what are Microsoft insiders saying? Not much, but here’s what ParsonsProject93 says they’re telling him:

I live in Seattle, most of my friends are MS employees. They’re all baffled by these decisions. Although…telemetry data isn’t handed out like candy.
…
There is a very time consuming and rigorous process to get access to it. And…it’s anonymized and in small quantities.

Indeed, there’s been no substantive PR statement. But here’s what Microsoft EVP Terry Myerson said 11 months ago, about Privacy and Windows 10:

Maintaining our privacy is an incredibly important topic. … Thus we welcome the questions and the feedback.
…
We collect a limited amount of information to help us provide a secure and reliable experience. … Enterprise customers [can] disable this telemetry, but we strongly recommend against this.
…
We aspire to deliver a delightful and personalized Windows experience. … You are in control of the information we collect…and can update your settings at any time.
…
If you ever find a situation where our software is not behaving the way it should…please let us know. … We are committed to following up on all reported issues. … We will continue to listen and respond, to earn your trust.

They have been gathering telemetry since XP. … It has always been easy enough to turn off.
…
Is the EFF gonna deep dive into Ubuntu and OSX? … Do you use Gmail…and other things in the Google cloud? … Guess what they collect the same **** Microsoft does.
…
I have no problems with Microsoft getting some scrutiny. … It’s just the whole ‘the sky is falling’…that bothers me. … It’s the ‘you can’t turn it off’ whining [though] you obviously can. … And in a proper company environment it will be disabled 20 ways to sunday by group policy.