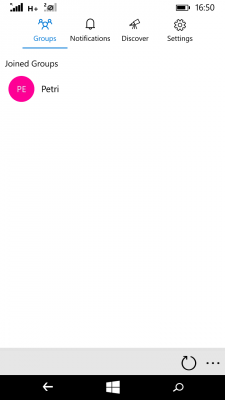 Leading up to the launch of Microsoft Office 2016, Microsoft released an app for mobile devices called Outlook Groups, which despite the name exposes the functionality of Office 365 Groups. The app is currently available for Windows Phone 8.1, Windows Mobile 10, and Android (worldwide except for China and France); and iOS (United States and Canada only).

Office 365 Groups are something of a replacement for email distribution lists and Exchange public folders that allow users to share and view a history of email communications, but also documents and access to other collaboration features, essentially tying OneNote, SharePoint, Exchange and other Office 365 applications together. You can read more about creating Office 365 Groups in Create an Office 365 Group in Outlook.com on the Petri IT Knowledgebase.

Outlook Groups also supports a chat view, which actually consists of threaded email conversations displayed in a Facebook-style message format. With this in mind, the app shouldn’t be considered a Slack competitor, as chat is not its primary function. Without an Office 365 subscription, you won’t be able to use Outlook Groups, further illustrating that this app isn’t intended as a standalone collaboration solution, but as a means of accessing and organizing Office 365 resources.

Once the app is installed, all you need to do is provide your Office 365 email address and password, and the app is automatically populated with the groups that you’re subscribed to, which you can see on the Groups tab. On the main screen, there’s a Discover button, that assumedly provides suggestions of other groups that might be of interest, and a Notifications tab.

In the current iteration of the app, you can view group members and owners, and there are links that will take you straight to a group’s OneNote notebook and files in OneDrive. Reading and editing documents relies on the native Office Mobile apps installed on your mobile device. 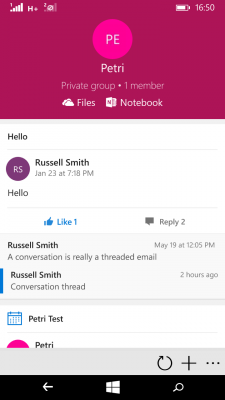 Conversation view isn’t as clean as the Slack beta app for Windows Phone, with the Like button for each post interfering with the ability to read and follow a conversation easily. And while chat isn’t the primary function of this app, I’d like to see the conversation view tidied up.

Do you need Outlook Groups?

If you’re part of an Office 365 team that already uses Groups, then this app might be worth a look. Currently there’s no access to calendars, although events are listed and can be added to a calendar. Other Office 365 apps, such as Yammer, are also missing, but I think we can assume more functionality will be added to this app in the future.