What Went Wrong At Microsoft: Surface and Marketing Mishaps 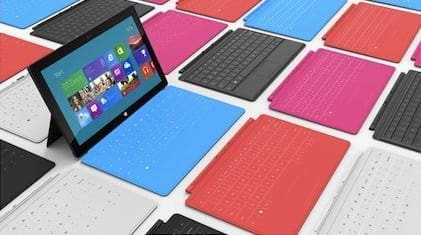 Over the last few years, Microsoft has dropped the ball on many opportunities. In this series of posts, I’ll take a closer look at what went wrong with Microsoft in recent years, which lead to the end of CEO Steve Ballmer’s career at Microsoft. In part one, I discussed the mistakes made with Windows 8, Windows Phone, and tablet devices. Today I’ll go over the Surface and Microsoft’s marketing fumbles. Finally, in part three, I’ll suggest some possible fixes.

The world was stunned when Microsoft wrote down the value of Surface stock by $900 million in the summer of 2013. We knew Surface wasn’t selling well, but we didn’t realize that (a) it was this bad and (b) that Microsoft was holding onto that much stock. I guess the clues were there: you could pick up a Surface RT at TechEd North America and Europe for less than the price of a decent electronic picture frame, recalling the days when HP cancelled their doomed webOS TouchPad.
The Surface was announced in Los Angeles in 2012 to much fanfare. In their constant effort to mimic Apple over recent years, Microsoft finally got exactly what it dreamed of: The media worldwide was talking about Surface. Even so, there was little to no information about availability of Surface. Those of us on the inside knew what was happening: It was “The Curse of Zune” all over again.

Distribution of Surface was initially limited to the USA, with stock at Microsoft Store (online and the smattering of retail outlets) and a few chains like BestBuy and Staples. I toured retail outlets around the east coast of Ireland on the first day of Windows 8 availability, where I found plenty of customers asking whether the Surface was in stock, and lots of confused-looking salespeople apologizing. I hear this scene was repeated worldwide. Microsoft had built up huge momentum, finally getting the same level of attention from the non-IT media that Apple gets, and they flopped. International distribution eventually expanded over time:

Other than Windows and distribution, there are flaws with the concept of Surface:

Hardware partners who put Microsoft into nearly every home and business were shocked when Surface was revealed to them. One story said that Surface was a last-minute project by Microsoft and that’s why OEMs were not briefed in advance. But Panos Panay revealed at the Surface 2 announcement that Surface was in the works for over two years… by the same team that was advising their partners, who are now Microsoft’s competitors. This, combined with Microsoft’s failed tablet strategy, has sent partners running to Android. It will take a lot to rebuild those burned bridges.

Microsoft Marketing, the proud creators of:

The most telling piece of the Seinfeld/Gates family advert (shown above) was when Seinfeld exclaims, “You need to connect with real people!”
The phrase “oxymoronic” comes to mind when I hear the words “Microsoft” and “marketing” in the same sentence – and on bad days, just the word “moron” comes to mind. Copying Apple half-heartedly and attacking Google is not a strategy (but I would love to see more vmLimited). There are thousands of people working in marketing for Microsoft and I have absolutely no idea what they do for a living, since their market presence is almost zero.
Soon after the launch of Windows 8, I visited the largest outlet of Saturn, a retail chain subsidiary of Metro AG (yes, that Metro), in Hamburg, Germany. What I found there was reminiscent of what I’ve seen locally, in the UK and in the United States: aisle after aisle of laptops and PCs, thrown out in any order, with little or no information about each model. It was like visiting a discount food market, where shipping packages are opened up in the aisle and customers pull out whatever they want. Compare that to the Apple departments in those very same stores, in which you have a simple display that is quality controlled by Apple featuring clear information about each model. Salespeople know the stock and decision making is made easy for the customer.


Microsoft needs to take control of the in-store display, not just in BestBuy, but everywhere. You’d think that retailers would do this by themselves, but they won’t. That’s just not how it’s done. If you want your products to sell, you have to pay for the store’s display to gain control over information, quality, and staff training. Without it, you get that mess that I witnessed in the subsidiary of Metro AG.
Never mind! Microsoft still has a place in the consumer’s heart with Xbox. A recent trend in Microsoft marketing is tossing out ideas to see what the reaction will be and then retracting terms that get negative reactions – at least, that’s my theory. Exhibit A: Xbox One. Never before have I seen a company alienate a loyal fan base so much. Xbox One was a hit when it was still a glimmer in every gamer’s eye. Whispers about Xbox 720 flew around the Internet. And then rumors of Internet always-on requirements, restricted game reselling, and others emerged. There was the Twitter scandal in which ex-employee Adam Orth insulted customers over the new requirements. The announcement of Xbox One wasn’t quite as dreadful as the Samsung S4 launch, but gamers were left asking: Does the Xbox One play games or is it an expensive Apple TV or Roku player? A week or two later, the Xbox One was revealed to be pricier than the Sony PlayStation 4, and with a lesser processor (which has since been improved when manufacturing started). In other words, somebody screwed up, or lots of somebodies screwed up the entire Xbox One message.
It’s great that Microsoft reversed those controversial policies, but the damage was done. Sony got the lift they needed, and Microsoft’s marketing department has not realized that Google is the elephant that never forgets. To this day, I still encounter IT pros who think that Hyper-V cannot run Linux VMs, and that it cannot do live migration. At least IT pros are meant to stay educated, but consumers will never do the same level of research. The damage is done, and it may take all ten years of the Xbox One’s projected life to get over this.

Where Is the Competitiveness?

Bill Gates might have looked like a nerd, but he was one aggressive competitor. Who else would have had the <insert appropriate body part here> to lead the then-dominant IBM along on OS/2 while secretly developing a product (Windows NT) that would kill it? Gates took aggression and competitiveness so far that the US Department of Justice wanted to break up Microsoft and until recently the European Union Commission was fining Microsoft. So I cannot blame Steve Ballmer for reigning things back. But did he go too far?
The name Metro became synonymous with Windows as the name of the now-unnamed tiled user interface in Windows Phone and Windows 8. Despite all the claims that it was just a codename, Metro was what pretty much every presenter and document called this interface. And then right before the release of Windows 8, Microsoft was allegedly threatened by an unnamed company over trademark use of the word “Metro.” Orders went out from Redmond: Stop using Metro as a name. Cue the confusion:

It’s kind of tough to get people on board with a feature if you don’t know what it’s called.
Those of us in Europe wondered how a holding company (if it was Metro AG) would be confused with a feature in Windows. We found it odd that they didn’t feel the same need to threaten a newspaper that is distributed freely on streets throughout Europe. I guess a free newspaper doesn’t have deep pockets to dip into.
SkyDrive is an integral part of Windows now. It has been available as an add-on for Windows 7 and older, and as an app for tablets and smartphones. Rupert Murdoch’s British Sky Broadcasting (BSkyB, a satellite and cable content company operating in UK and Ireland) repeated the trademark trick over the use of the term “sky” in SkyDrive. Personally, I’ve never gotten confused between a cloud storage system and a TV channel that repeats episodes of The Simpsons and Malcolm in The Middle for four hours a night, and I doubt any juror would either. Once again, Microsoft meekly surrendered and agreed that no one should every use the term “sky” other than Murdoch’s minions. Once again, fragile Microsoft branding was damaged.

Enough with the complaining! In part three, I end the negativity and suggest some changes that can bring Microsoft back to a competitive and favorable position.