Microsoft’s Julia White on Office 365, Satya Nadella, and One Microsoft

This is the second part of our two-part interview with Microsoft Office Division General Manager Julia White. In this interview — edited for space — we chat with Julia about the origins of Office 365, Office for the Mac, Microsoft’s ‘One Microsoft’ internal reorganization, and the changes that new Microsoft CEO Satya Nadella has brought to the company.

If you’d like to catch up on what we discussed in the first portion of this two-part interview, just follow this link for Julia’s thoughts on the launch of Office 365, its growth and rate of adoption.

BPOS and the Origins of Office 365

Jeff James: Have you been surprised how successful Office 365 has been since it was released? It seems like it may have exceeded some expectations. Maybe you could put that in context?

Julia White: It has and it hasn’t. We’ve been at this for a long time, and we had our predecessor to Office 365, called the…

You’ve got to learn what you’re doing; being great at running services, knowing what it means in customer experience end‑to‑end. What’s the whole life cycle? Getting deployed. Calling us once you have questions. What happens if there’s an outage? That whole thing…. We’ve been doing this for a while, getting it great, great, great.

Now we’ve announced the Office 365 brand and yeah, you’ve seen the trajectory really fly. Much of that is because we’re maturing as a services company and the awareness is getting there. Honestly, what’s come so fast is the acceptance. It’s really been just in the past 12 months.

Twelve months ago, 85 percent of my customer conversations with CIOs was “If I go to the Cloud, you’ve got to talk to my CSO. You’ve got to convince my security wonks.”
Now the conversation is, “Of course, I’m going to go. Tell me how.”

Jeff: Just in 12 months you’ve seen that big a jump.

Julia: Yeah. For three years, since we officially launched it.

Jeff: So there’s been a lot of prep before this sea-change here.

Julia: It feels like it’s been pushing and pushing. Now people are, “Oh, I get it. I got it. I got it. Now I need to go.” But we still have more work to do.

I was talking to the leading 365 analyst at Gartner, Matt Cain. He was, “This it it. You just did it. All the stuff that you showed us in terms of Office Graph and learning.” He said, “Any reason people had not to go, it’s over.” He was, “I’m going to go back and readjust our expectations of cloud adoption.” It’s their way too, now. We hit this alignment of people being ready and we wowed them with a bunch of stuff that became possible in the cloud.

Another aspect of that too. It wasn’t until 18 months ago, 20 months ago now, where we fully moved to this new cloud engineering model, where you see stuff coming to the surface every single week and releasing tons of new capabilities. We’re doing things that we can only do in the cloud, things we can’t do on a server. 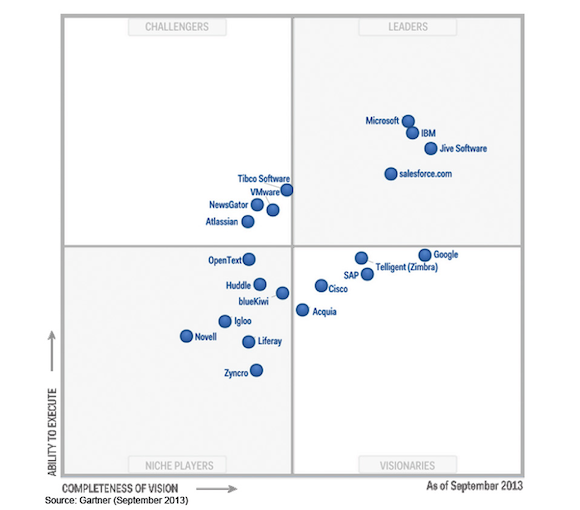 Research firm Gartner placed Microsoft in the ‘Leaders’ quadrant of their 2013 report on social software in the enterprise due to Office 365, Yammer, and Microsoft Lync. (Source: Jive Software/Gartner)

Our new engineering pivot around that is, “Hey, go innovate as fast as possible and as robustly as possible in the cloud. Don’t be constrained by what we’re going to do in the server.”

You’ve seen us do so much more with 365 since then, which has been a big driver of, “Oh my God, look at all this stuff that’s come.” To go way back to how we’re engineering, that’s been a big catalyst of change.

Jeff: That was around the time of System Center 2012 and Server 2012 R2, right? That’s roughly the time frame when Microsoft had this big internal reorganization when it came to developing products and how you guys work across teams?

Julia: Once we released all of our 2013 products, like SharePoint 2013, Exchange 2013 and Lync 2013, (it was right before we shipped that). The engineering team had reorganized from an Office perspective to be cloud first and have this engineering model of that way within the division. A little bit after that we had the big One Microsoft reorg. It also helped speed things up.

Office 365, Apple, and the Macintosh

Jeff: What about the Mac? Most of our users are Mac users and you don’t have that many clients that are Macs, but when it comes to Mac support and Office 365, what’s on the road-map?

Traditionally, Microsoft has done a pretty good job about releasing good Office clients for the Mac. What do you foresee for the Mac on the Office 365 front?

Julia: As part of the Office 365 subscription you buy a client subscription profile you get installed on PC and Mac. You’ll see that continue. We will absolutely continue to support the Mac. You will see another version of Office for Mac come out in the future. I don’t have any specific dates or any of that kind of stuff, but we are absolutely working on the next rev of Office for Mac.

It will be great. We do have public information about things. We’ve heard the most need around Outlook. “Hey, make this a business‑class email app.” Absolutely doing that. All the things people told us, we’re fixing 100 percent of them. [laughs…]

We know the pain of using Outlook for the Mac. We’re on it, we still have a world‑class Mac team that builds it and they do a lot of other things too, such as create iPad apps. We’re still committed to supporting that platform. You’ll see it continue to be part of our Office 365 subscription moving forward.

The “One Microsoft” Reorganization

Jeff: Great. My last question would be, from your perspective, internally, Microsoft seems much more open to embracing non‑Microsoft platforms. I remember going to this Microsoft management summit about five or six years ago. The System Center team was giving out these little pink pigs with wings. 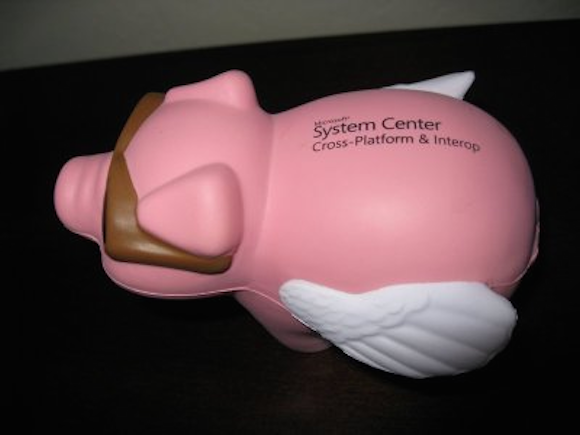 Jeff. …which Steve Ballmer once said was a cancer on the industry or something like that.  Anyway, it’s just really fascinating for me to see how Microsoft has embraced all these different platforms. Maybe you could talk a little bit about how that philosophy has developed and how it’s going to change throughout Microsoft? From the outside, it looks like it’s a radically different…It’s Microsoft 2.0 or 3.0.

Julia: That’s fair. Certainly from Office our goal or vision or whatever you want to call it, was be the very best productivity experience on every platform. That takes time and that takes the right investments and getting that done in the right way, but that’s what it’s been and what it will continue to be. Hopefully, we proved to everyone that’s the case when we brought out our iPad apps. Everyone expected them to be junk because, “Oh, Microsoft won’t make them good.”  They’re awesome actually.

Jeff: They were good.

Julia: We’re going to make them that awesome on other platforms too. We already talked about bringing them out for Android tablet. We’ll have them in touch‑oriented versions for our Windows Store. We want people to be able to have that un-compromised Office experience on all devices, unapologetically. Satya said it well, in terms of this isn’t a competitive reality, it’s a customer reality. That’s what our customers need. That’s what we’ll deliver because that’s what our customers want.

Jeff: I know I said “my last question,” but this is truly my last question. A lot of new Microsoft products and services are coming out now and most were obviously on Steve Ballmer’s watch and were started during his tenure. It’s not fair to give Satya all the credit for Office for iPad, because he barely just became CEO when it was released. Maybe you could talk about that perception? It does seem from the outside that Satya has breathed new life into Microsoft and he’s definitely a different type of leader, but at the same time, we always try to be fair. Steve deserves his props too.

Julia: Yeah. Obviously we were building these apps for a long time, not just when Satya took over. That would be really fast development. [laughter] …truly amazing.

Jeff: That’s true. That would be crazy agile development. 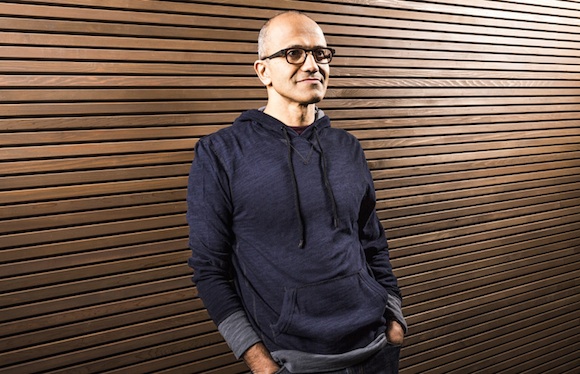 Microsoft CEO Satya Nadella earns high marks from many insiders, including White: “There is a lot about what Satya’s doing and his approach to things, his clarity, his empowerment of the organization.” (Source: Microsoft)

Julia: Certainly. Of course, we’ve been listening to our customers. We’ve been working on the strategy for a while. Steve should get credit for that. Like anything, when there’s change people are willing to listen in a new way that they weren’t before and give us credit for things that we’ve been doing for a long time, but people had a certain lens like it wasn’t believable, where now people are listening with a more open‑mindedness. At least that’s how it feels to me. At least for a while they’re listening now in a different way. I think that’s part of it but I also want to give a lot of credit to Satya too. He’s very clear in terms of, “Hey, this cloud first, mobile first thing means that we do things like this proudly.”

The event we did together in San Francisco to announce these things [Office for the iPad], that was Satya. “This is how I want to bring these things out. I want to be proud about this thing and we’re going to kill it.” Props to him. Yes, Steve gets credit, but there is a lot about what Satya’s doing and his approach to things, his clarity, his empowerment of the organization. It is fun.

Jeff: Great. Thanks. Sorry about the head fakes and the request for that last, last, last question.