How to Limit Targeted Ad Tracking in iOS 6 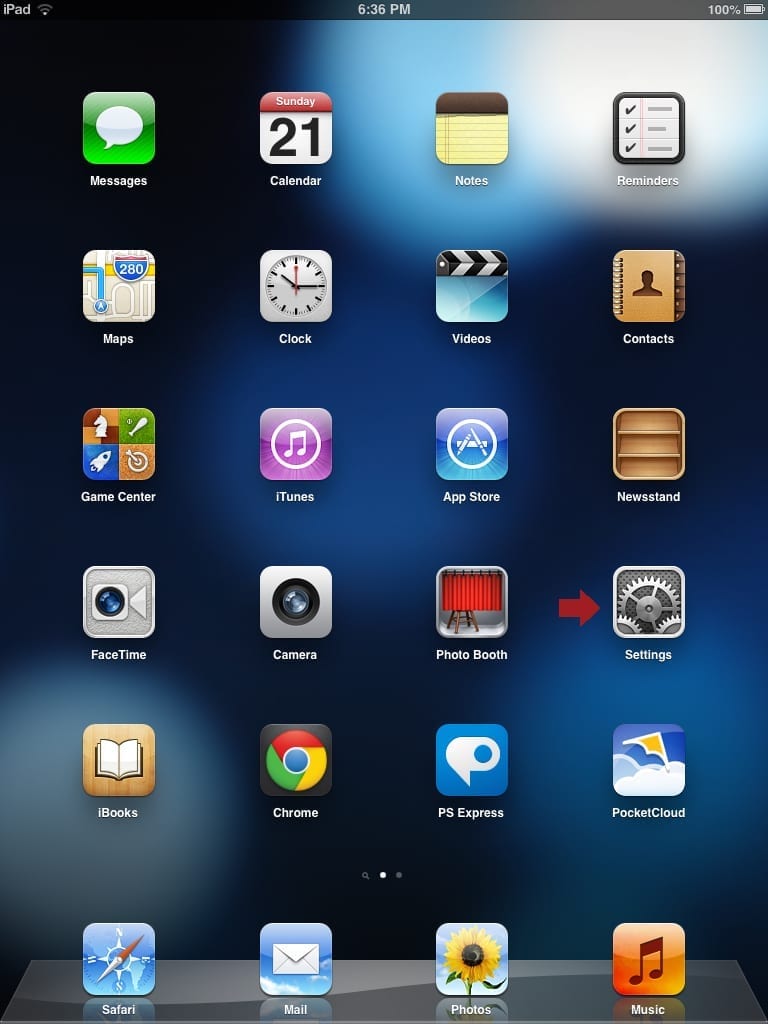 Ad Tracking: Two simple words that when put together give many people cause to shudder. No one likes the idea that what he or she does on a computing device is monitored, analyzed, and used to target advertising. Personally, the concept conjures imagery of the Big Brother government from George Orwell’s novel 1984. Luckily that analogy is somewhat over-the-top and laughable, but the fact remains I still don’t like the concept of Ad Tracking. With the advent of iOS 6, Apple turned on Ad Tracking once more, but in this article I’m going to show you how to turn it right back off. Before we get to that though, let’s discuss what’s going on in a bit more detail.

It doesn’t much matter the device, operating system, or web browser you choose to use — odds are there will be some degree of ad tracking implemented. The marketplace is just too lucrative for manufacturers of these systems to swear off the concept. So they try hard to have their cake and eat it too by implementing ad tracking mechanisms as quietly and discretely as possible. Apple is by no means any different: Of the 200+ new and enhanced features they touted with iOS 6, nowhere is their new form of Ad Tracking listed. No real surprise here.

Ad Tracking on iPhones and iPads is nothing new. It was there in its original form until iOS 5 when Apple publicly killed it. Aye, here’s the rub — Apple never agreed to not implement Ad Tracking, just their original iOS implementation of it. In much of the press surrounding the change, it was very easy to miss that little detail. Nevertheless, it’s the reason Ad Tracking was only absent from iOS for one major level version. Gone in iOS 5, back in iOS 6.

Why did Apple go to all the trouble to eliminate Ad Tracking from iOS 5 just to bring it back with iOS 6? Prior to iOS 5, Apple used a form of Ad Tracking that relied on the iPhone or iPads Unique Device Identifier or UDID. The UDID is akin to a serial number. It’s a 40-character string that, as the name implies, uniquely identifies each iOS device. The problem is that Apple allowed the sharing of the UDID, along with other information, with third parties. Imagine an advertiser knowing personally identifiable information such as your name, phone number, address, along with the specific device you use. Security researchers from Bucknell University issued a paper in 2010 showing that 68 percent of the apps they reviewed transmitted UDIDs back to the app developer’s servers. Apple’s public UDID-induced nightmare had begun, and it would only grow. Lucky for Apple they had already stopped the use of UDIDs by the time hacker group AntiSec released one million UDIDs on the Internet, often with personal information included.

Apple may have stopped using UDIDs for Ad Tracking, but as I mentioned earlier they didn’t swear off the practice altogether. They simply needed time to develop a better method that didn’t personally identify users. With iOS 6 they implemented their new solution, the Identifier for Advertising or IDFA. The IDFA is fundamentally different from the UDID for Ad Tracking in two ways: First, the IDFA is under the user’s control, meaning we are able to turn it off. The second major difference between the new IDFA and old UDID is that the IDFA does not specifically identify a user or device. Instead, it instead acts more like a browser cookie; just like a cookie, the IDFA is wiped out when a device is factory reset.

How to Turn Off IDFA Ad Tracking in iOS6

To turn off IDFA Ad Tracking in iOS 6 begin by opening the Settings app.

Tap the General category then tap About. 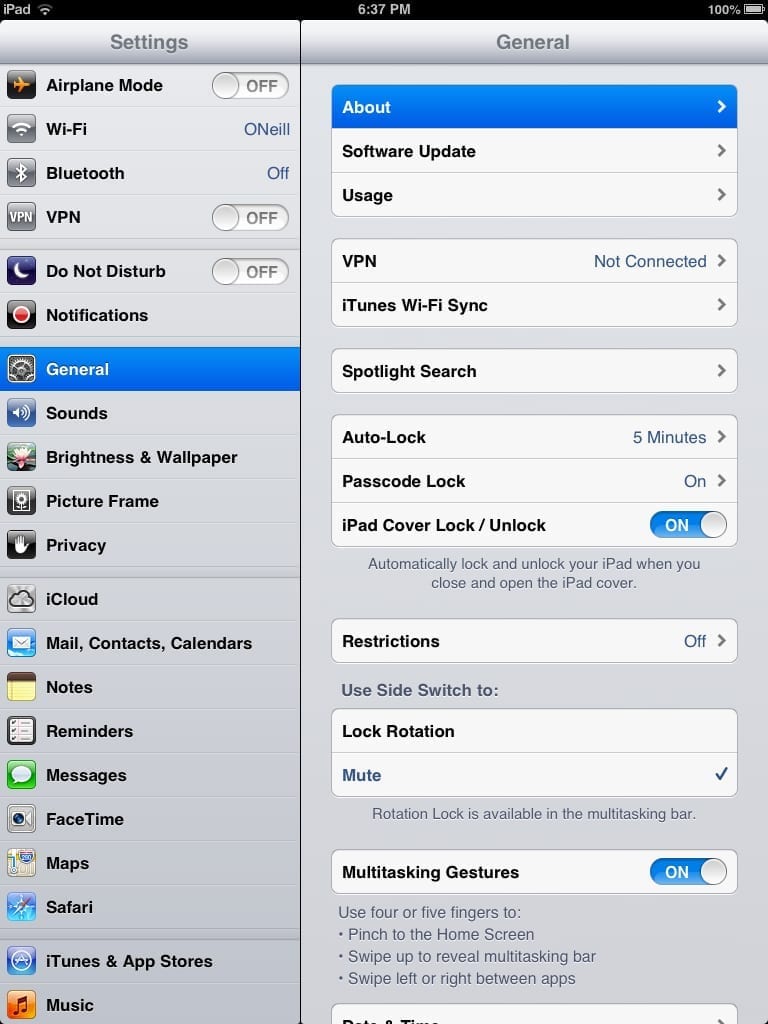 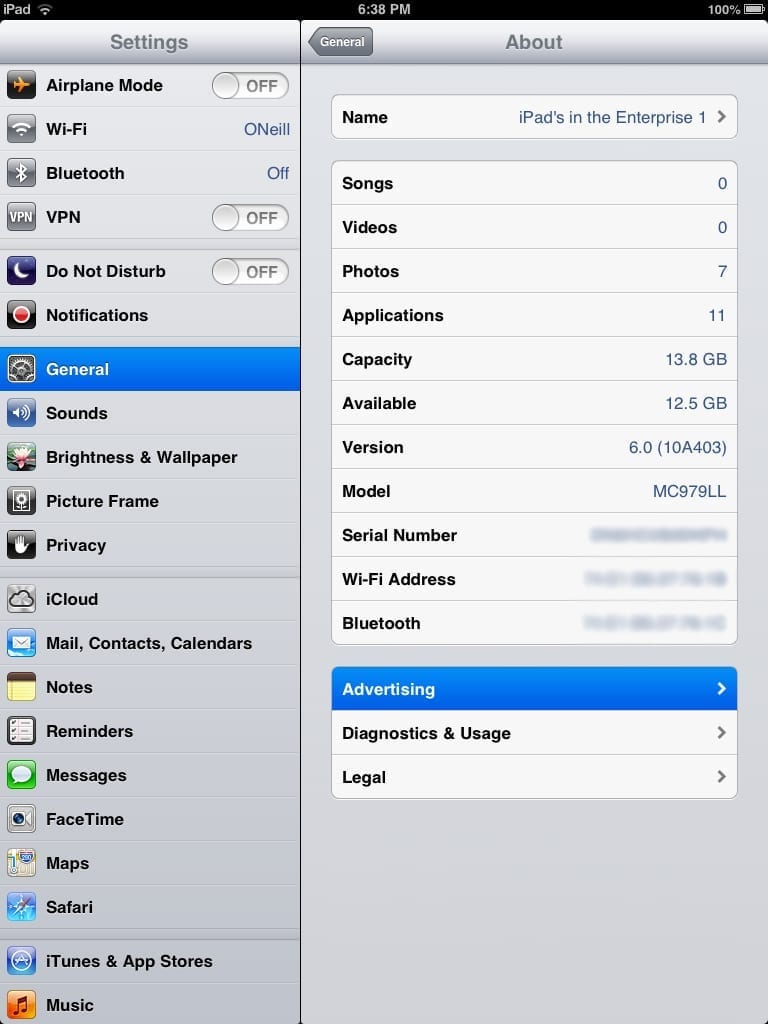 Turn the slider ON for Limit Ad Tracking. 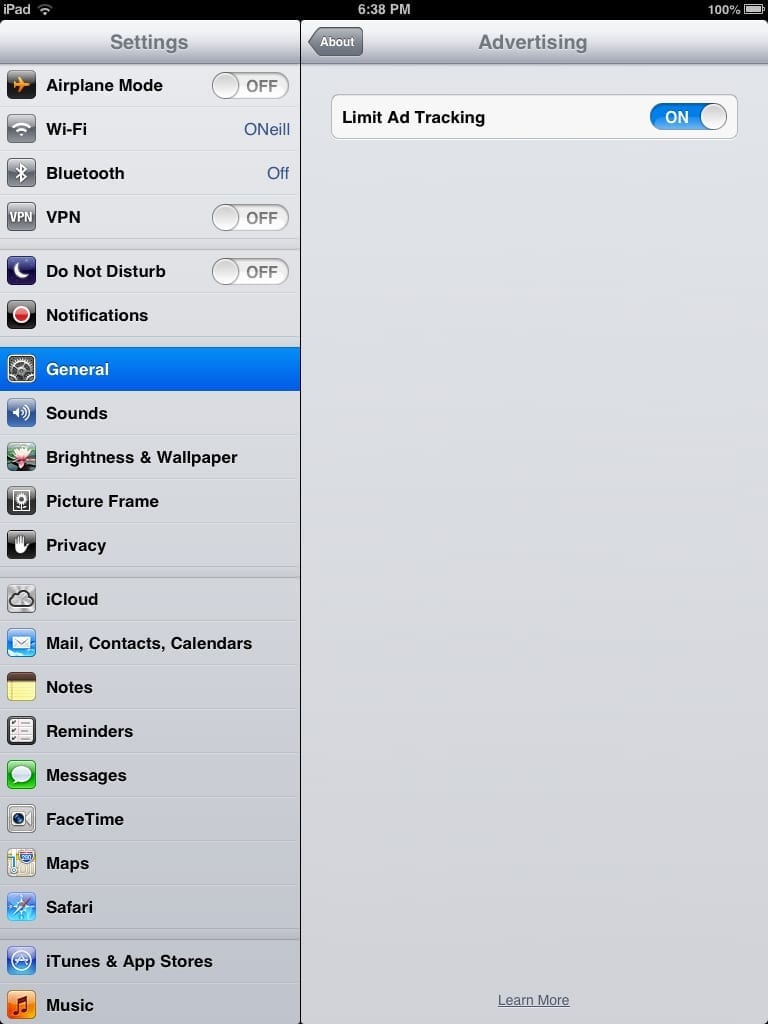 Note: Notice the confusing wording used by Apple. Many users may interpret “ON” as meaning Ad Tracking is enabled. Not so! The limiting of Ad Tracking is what is actually being turned on. I sincerely hope this is just bad wording by Apple and not an attempt to misdirect users. However you look at it, we’ll probably never know why Apple chose this particular phrasing.

Like spam, Ad Tracking is not going away anytime soon. Both generate big dollars in revenue and as such will probably be part of the online experience for the foreseeable future. At least with iOS 6, Apple empowers us with control over whether or not our online activity is shared with advertisers. Let me be clear that turning Ad Tracking off won’t stop ads from appearing within your apps. The ads that do appear will just be more generic and may or may not suit your interests. Consider it shotgun advertising.