Getting the Most Out of Office 365: Which Tool is the Best for My Team?

Working in a team effectively is a chore for many reasons. One reason why teamwork can be taxing is that there’s a constant need to share information. Frequently we need to communicate with our team members, but we all know that communication can take on several different forms. Sometimes you might need a question answered ASAP, but other times you might just need to send information along as an FYI. And when a document needs to be authored by more than one person, then that’s where things can get messy.

Teamwork tools need to be more sophisticated than simple email. If you think you are only using email to communicate, then you are fooling yourself because that’s nearly impossible. Frequently email is the only digital messaging tool used, but digital communication takes on many more forms these days.

Attaching documents to emails for comment can become unwieldy fast, and emailing meeting notes in the form of a whiteboard photo is useless to most people. Microsoft has been giving teams the tools to communicate better for years, but recently they have wrapped all their tools up together in two core tools: Yammer and Office 365 Groups.

Office 365 Groups represents all the traditional productivity tools tied together in a quick and easy package. It contains a shared OneDrive for Business space, OneNote notebook, shared calendar and inbox. Groups are created easily from Outlook on the Web and can be made public or private. When a group is created, its members can be emailed via the corporate address book as an email group.

For the most part Office 365 Groups looks and feels exactly like email and document sharing, because it is. The important element to the tool is how easy it is to create shared resources. Frequently teams are formed, but they lack a shared space to store relevant documents, notes, and conversations. If those in your team are comfortable with their current tools and do not want a change, then Office 365 Groups is your best path to cloud collaboration.

On the other side of the spectrum would be Yammer Groups. Unlike Office 365 Groups, Yammer draws inspiration from consumer social networks to inform its communication paradigms. Instead of sending emails back and forth, Yammer uses more complex tools popularized by social media. 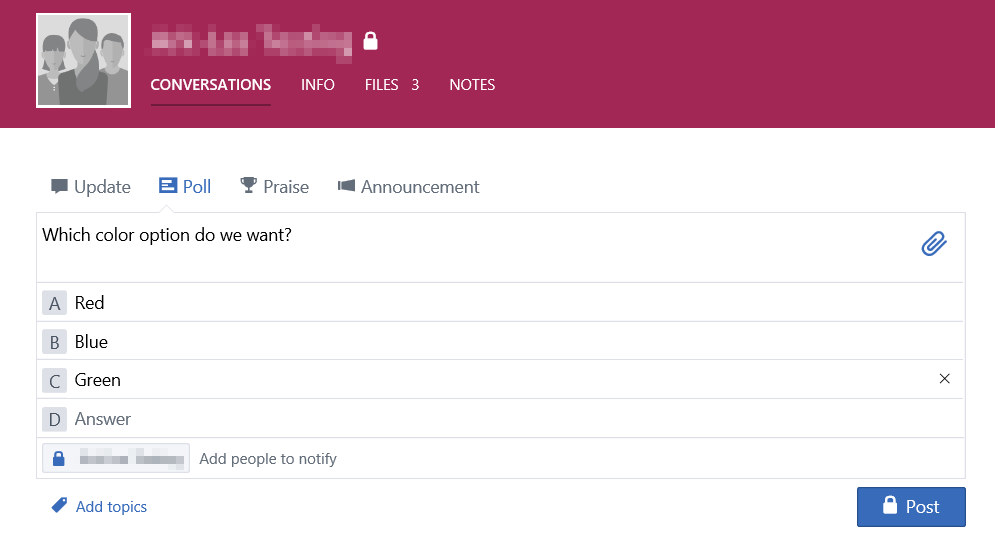 To connect with teammates in Yammer Groups, you can make a post in the group timeline. To make sure your coworkers get notified, you can mention them in the post. To signify you’ve seen a post you can like the post or comment, or add your response via your own comment. Yammer also has more advanced tools for teamwork, such as polls, announcements, and praise. These help your team communicate more directly without invoking the wrath of reply-all emails.

Modern tools like Yammer still have email like messaging, but their real strengths lie in their ability to avoid more messages with tools like polls or the ability to turn off notifications from a thread you are done with. If your team doesn’t like email and is not afraid to learn a new tool, then Yammer Groups is for you, and if your team members already use Facebook, then Yammer will be very easy to pick up.

OneDrive for Business acts as the file storage service for sharing documents on Yammer, so whether you choose to use Office 365 Groups or Yammer Groups, then storing your documents in OneDrive for Business is a good first step. Ultimately, whatever tool you team uses should be the one you invest in. Yammer does have some cool features, but if you know it will be a struggle to get buy-in from coworkers, then it may not be worth it. Also, Office 365 Groups is a great first step toward a more modern workflow.

More in this series: