There are hundreds of routine, mundane tasks that IT professionals often perform that should ideally be automated, potentially freeing up their over-scheduled calendars to work on things that really deserve their attention. That’s why we’ve included a list of a few of the most popular free and/or open-source automation tools on this page as part of our larger free tools for system administrators directory.

It’s important to note before we get to our list that we’re making a distinction between “scripting” and “automation.” That’s why you won’t see PowerShell listed here, as we’ve decided to place it in our directory of free scripting tools. Yes, PowerShell is a fantastic tool for automation, but not all automation tools are command-line based, and we felt that PowerShell was a better fit for the scripting category.

Now that some classification housekeeping has been dispensed with, let’s get to our list of free and open-source automation software. If you don’t see one of your favorite automation utilities listed here, please add a comment at the end of this post and we’ll consider adding it to the article.

One of the most useful utilities I’ve come across is AutoHotkey, an open-source utility for Microsoft Windows that lets you create mouse and keyboard macros manually, or by using a macro recording function. For example, you could use AutoHotkey to create the abbreviation ‘SCVMM’ that would produce the words ‘System Center Virtual Machine Manager’ every time you type the abbreviation, whether you’re in a text editor, text-entry field, or another program element that accepts text. You can also remap buttons and hotkeys to other input devices (like game controllers and mice), and even to remote control devices thanks to integration with WinLIRC client scripting. And my favorite feature? You can take any script and use AutoHotkey to create a stand-alone, fully-executable .EXE file that you can operate on other PCs, even ones that don’t have a copy of AutoHotkey currently installed on them.  [Download AutoHotkey] 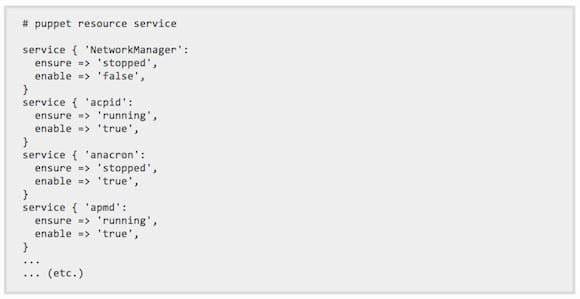 If you haven’t heard about Puppet, you’re missing out on one of the hottest IT automation stories of the last several years. Created by Puppet Labs, Puppet is software that gives IT professionals tools to automate IT infrastructure from the acquisition to provisioning and management stages. Much like other types of automation software, you can use Puppet to automate mundane IT tasks. But where Puppet takes things to the next level is with scope and scalability: You can use Puppet to manage a single server, or you can use it to automate tens of thousands of servers in an on-premise datacenter. Or you can use Puppet to manage servers in the cloud, or at a hosting partner. The open source variant of Puppet is free, while the enterprise edition adds on support for VMware, includes support options, and a host of other features. (See the differences between Puppet Open Source and Puppet Enterprise.) [Download Puppet Open Source]

Installing, updating, upgrading, and removing software, service packs, and other programs from a large number of PCs can be a tedious, mistake-prone task. One free option is to use WPKG, an open-source program that can do all of the above for Microsoft Windows machines. WPKG hasn’t been updated as much in recent years, but some users have reportedly used the tool to automate Windows 8 deployment tasks with only minor issues, so it still could be a valid option for cash-strapped admins. It can integrate with Active Directory to install software only to selected PCs, can run in the background in silent installation mode, and can also work with third-party installers and other programs to deploy and configure updates. [Download WPKG]