The Evolution of Microsofts Collaboration Story for Office 365 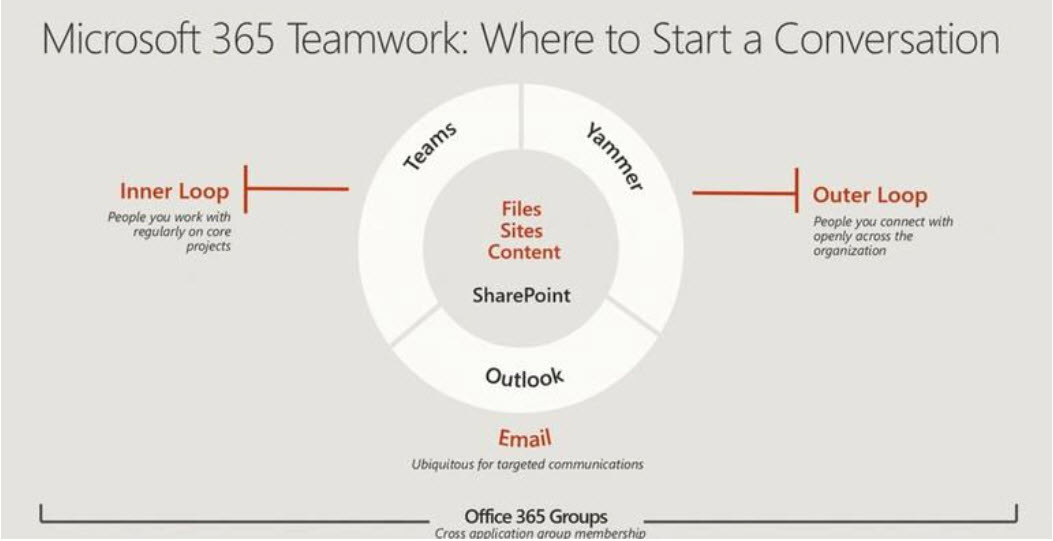 Office 365 is a Collaboration Platform

Anyone who attends a Microsoft briefing about Office 365 collaboration technology has seen the compulsory “inner-outer” loop slide. Microsoft started using the slide at the Ignite 2017 conference to position the various methods available to users within Office 365 to communicate with each other. I’ve nothing against the slide. It is a reasonable marketing position. However, the reality within most tenants is that the demarcation between products is seldom so clear.

The reason why is simple. Microsoft’s collaboration story for Office 365 has been in a state of constant evolution since 2011. Because of the many changes in strategy and emphasis by Microsoft, customers have struggled to understand the available technology and what approach will likely work best for them.

Communicating a “strategy du jour” is a failing of many technology companies. Technical developments, customer requirements, competitive pressure, acquisitions, new learnings and insights, and people shape the outbound messages from a company. In the case of Office 365, all these influences apply.

When Microsoft launched Office 365 in June 2011, the collaboration technologies were plain old email with Exchange and document-centric workflow from SharePoint. Both products tried to make collaboration easier, but Exchange struggled with the legacy of public folders and a history of failed attempts to expand from its core strength as an email server. Exchange Routing Objects, for instance, seemed promising, but failed.

SharePoint did not do much better. Despite a huge ecosystem of third-party developers doing their level best to make SharePoint a true platform for collaboration, it could never really be anything but an excellent document management platform And anyway, in 2011, Microsoft didn’t care about making Exchange and SharePoint more collaboration friendly because the priority was to transform the on-premises code into a shape suitable for cloud operations.

In June 2012, Microsoft bought Yammer for $1.2 billion. Quickly, Microsoft hitched its collaboration efforts to Yammer, which became the answer for everything. Alas, Yammer’s development never matched the hype and the wonders of enterprise social networking have still to be revealed to many. The sad thing is that Microsoft took far too long to integrate Yammer with the rest of Office 365 and Azure Active Directory, which led many organizations to give up on the product.

Microsoft then launched Office 365 Groups in November 2014. On the surface, Groups promised a pretty good solution for people who use Outlook to organize their working day. A better distribution list (but one that still cannot match all the features of distribution groups), a neat integration with SharePoint Online (disguised initially as OneDrive for Business), a shared OneNote notebook, and easy group management. It all seemed so good, and better than the site mailboxes fiasco that was the previous attempt to make Exchange, Outlook, and SharePoint work nicely together.

Microsoft now emphasizes Groups as a membership service (which is how it is used by applications like Planner and Teams) and doesn’t talk so much about using Groups as a collaboration platform.

The reason why is Teams, which has been generally available for a year now (but still not available to government tenants). “Outlook for millennials” promised a new take on a hub for people to work together. Microsoft’s latest public data says that 200,000 organizations use Teams, a growth of some 75,000 tenants in six months. What Microsoft does not say is how many of the 120 million or so Office 365 monthly active users use Teams. In some cases, everyone in a tenant uses Teams, in others, not so many because people are still sorting out whether Teams works for their company and how Teams works alongside email.

There’s no doubt that Teams gets a lot of love and attention from Microsoft marketing right now. Events like the Enterprise Connect conference (March 2018 – see the video for the session led by Bob Davis) give an opportunity to emphasize the progress Microsoft is making in the transition from Skype for Business Online to Teams, including the availability (soon) of some nice third-party devices that run Teams and Cortana together to make voice and conference calls easy to set up. Other recent developments include support for guest users with any email address and tenant switching in mobile clients. It’s all happening for Teams.

Meantime, the focus for collaboration has shifted well away from the classic Exchange and SharePoint products. These are now regarded as “core workloads” within Office 365. In other words, Exchange delivers mailbox services to other apps (for example, the way Teams stores compliance records in mailboxes) while SharePoint is the go-to storage for documents.

Although it’s been difficult (and sometimes frustrating) to keep up with Microsoft’s shifting focus from email to Yammer to Groups to Teams, we must understand that Microsoft’s strategy reflects what has happened inside Office 365. Applications are more integrated and connected by the Microsoft Graph and new services like Azure B2B Collaboration and KeyVault are available from Azure. The infrastructure is massive (and expanding with new datacenters in France operational in March) and reliable. Mobility is more important now than it was in 2011. These factors contributed to the development of Teams, which draws upon many components from Exchange, SharePoint, and Azure while building its own services. Putting together a complex application based on a mixture of new and existing cloud components could not have happened inside Office 365 until relatively recently.

What to Use When

But coming back to the famous inner/outer loop slide, I summarize it as follows:

Develop Your Own Loops

It is important to have a strategy that your company is comfortable with and users understand. Microsoft will always want you to deploy and use their latest and greatest technology. They gain a competitive advantage if you keep on investing in new applications that are unavailable on other cloud platforms and they get the chance to upsell premium features. Also, in some cases, new applications drive desktop upgrades as they require specific versions of Windows and/or Office.

Maybe you should create your own version of the inner/outer loop slide. One that suits the business needs of your company, takes appropriate advantage of the available technology, and lasts longer than the next flashy PowerPoint pronouncement about the right way to collaborate.