When implementing any routing protocol, it is vital to have a handle on how the protocol operates and makes decisions. Without this knowledge, it is almost impossible to check and make sure that the protocol is configured properly and is operating as expected. This article takes a look at the Enhanced Interior Gateway Routing Protocol (EIGRP), how its metric is calculated, and how this information can be used to ensure that traffic is taking the path that is expected. 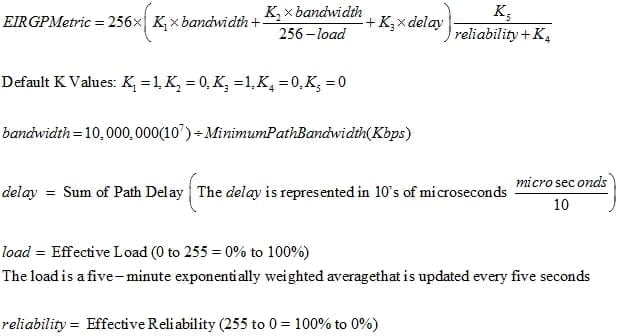 The k-values shown in Figure 2 can be used to alter the metric and give additional weight to certain network parameters. On most modern networks, the default k-values and default metric calculation are used.

Figure 3 displays a simple network topology that will be used to calculate a sample EIGRP metric.

The next part includes adding up the total delay across the entire path to the destination. In this example, the delay on both links is 100 µsec for a total of 200 µsec of delay across the entire path. Keep in mind that when calculating the delay part of the EIGRP metric, that delay is not represented in µseconds but in 10’s of µseconds. The delay metric calculation is shown in Figure 5:

These two parameters are then inserted into the EIGRP formula and a metric is found; this is shown in Figure 6:

As shown in Figure 2 above, there are a number of EIGRP k-values that can be changed to affect how the metric is calculated. Each of these k-values can be any value from 0 through 255; to alter these values use the metric weights command while in router configuration mode (router(config-router)#). It is typical to leave the default values, but network engineers should be familiar with the possibility of k-value changes. Look for this command in the configuration if the EIGRP metrics are not calculating correctly (based on the default metric formula).

Most of the time when routing protocols are implemented on small simple network topologies, they work without much additional configuration. When working on networks that are larger, the complexity of the routing protocol configuration can increase. This complexity and the size of the topology can make troubleshooting very complex as well. The EIGRP metric, unlike the OSPF metric, can be very complex to calculate and remember. It is important for any engineer that will work on an EIGRP network to be familiar with how the EIGRP metrics are calculated on their network (default or otherwise). Without this information, it is impossible to troubleshoot how the route to a destination is calculated.