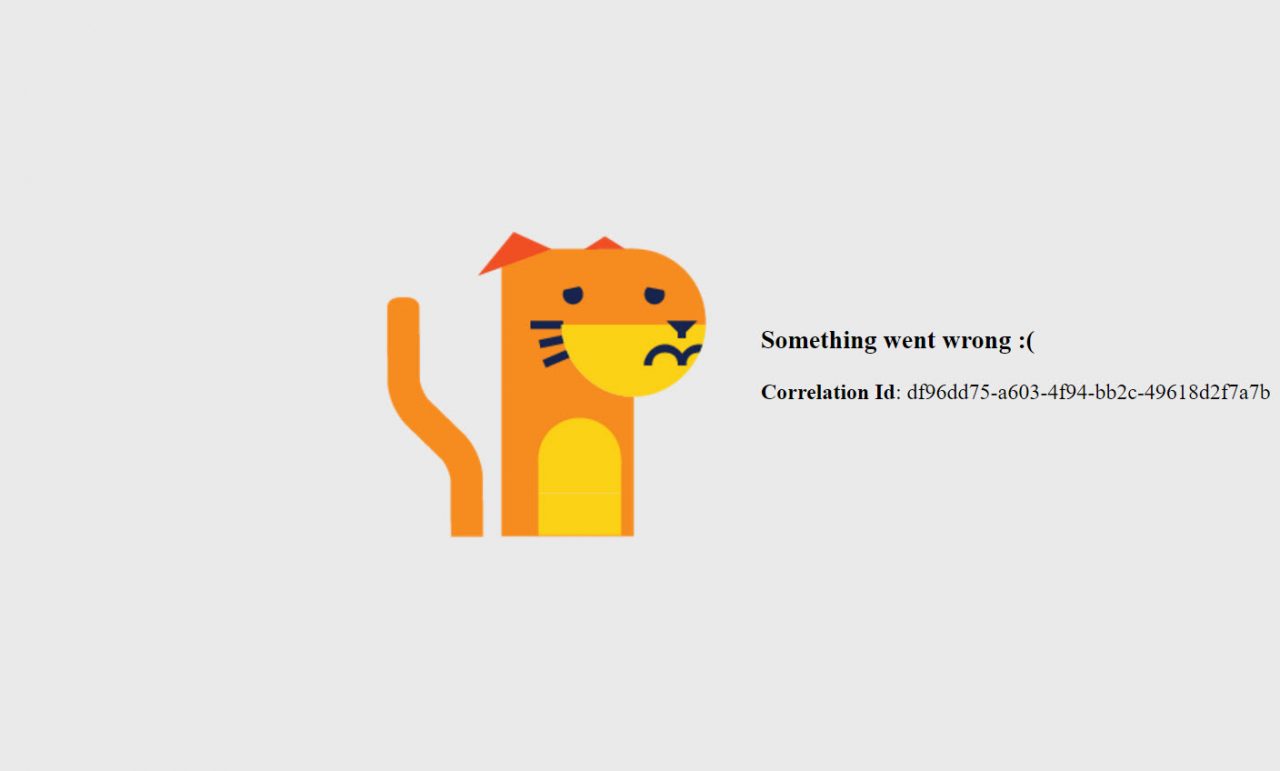 13 March Update: Microsoft has withdrawn the new Delve search to go through an “extra round of implementation” before they release the new bits generally within Office 365. I will update this post when the new search reappears.

Microsoft’s recent announcement that Delve now boasts “intelligence-based search” is interesting on many levels. This is the first major overhaul for an important Office 365 application since its introduction in 2014. Microsoft promises better search by leveraging information about user activity from the Office Graph along with a new home for Delve. Let’s see what they have done.

Too Much Data for Delve to Process

Proclaiming that search is now intelligent implies that earlier searches were dumb, or at least ill-informed. I am sure that this is not what Microsoft’s marketing team meant, but it is in fact true. Older Delve searches use the content indexes created as users add documents to SharePoint Online and OneDrive for Business sites, together with documents attached to email. The Search Foundation (aka FAST) updates the content indexes. On-premises versions of Exchange and SharePoint use the same technology.

Content indexes can only ever be as good as the data they index. Human beings are often unstructured in how they name documents. Titles are inconsistent (or incoherent) and few people bother to update properties and tags to use as search clues. The adage of “rubbish in, rubbish out” applies because the less structured the information, the harder it is to search.

Microsoft says that the content indexes in Office 365 grow 10% month-over-month. We can interpret this to mean that users make increasing use of OneDrive for Business and SharePoint Online sites to store documents instead of local drives. This is exactly the kind of mindset change that you want to see if you want to maximize the use of Office 365, including search. However, the downside is that the swelling volume of unstructured and ill-organized data can make it even more difficult for users to find information. It is a classic needle in a haystack.

To solve the problem of how to find information among so much data, Delve combines the raw content indexes with intelligence derived from the Office Graph using the Microsoft Graph API to generate more precise and focused search results. Instead of returning results that match input queries, Delve filters the results to extract information that is most relevant to users. Factors such as who created documents, the site holding the documents, and your relationship to those people and sites are considered when Delve presents search results. The idea is that you should see the most relevant information first followed by less relevant content as the search progresses. The new search will be available to all Office 365 tenants by the end of summer 2017.

As you type characters into the search bar, Delve begins looking for matching items (documents, users, and boards). Because the Office Graph influences the search, more recent items appear first. This is logical because it is likely that people are most interested in something they have worked on recently. 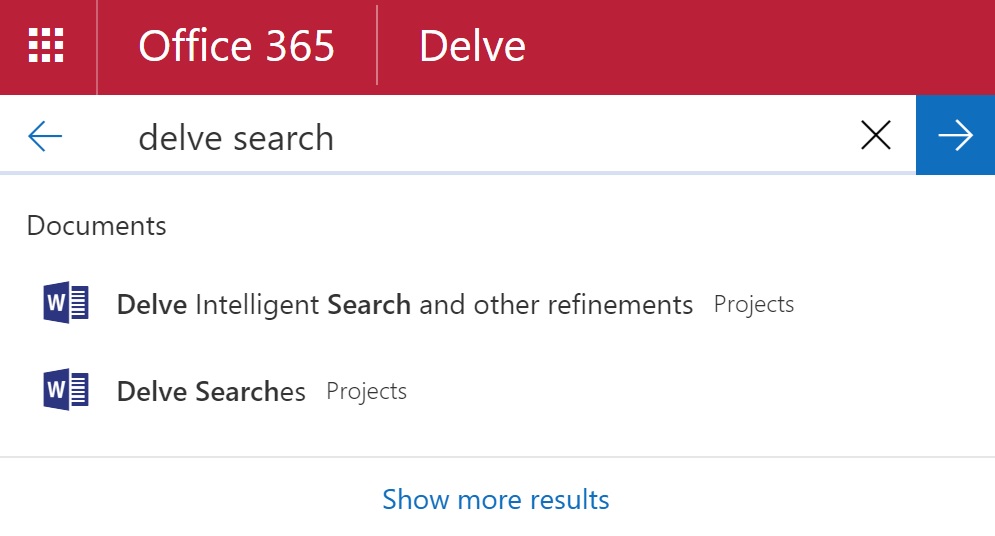 If you progress to a more traditional search, you might see something like that shown in Figure 2. In this example, we searched for “Office 365”. In response, Delve highlights some users who might match the search term, including the author team for the “Office 365 for IT Pros” eBook, the shared mailbox we use for reader feedback, and a site mailbox we once used to coordinate files. You can limit results to just documents (which includes PowerPoint, Excel, and other files) by changing the “All result types” option in the menu bar to “Documents”. 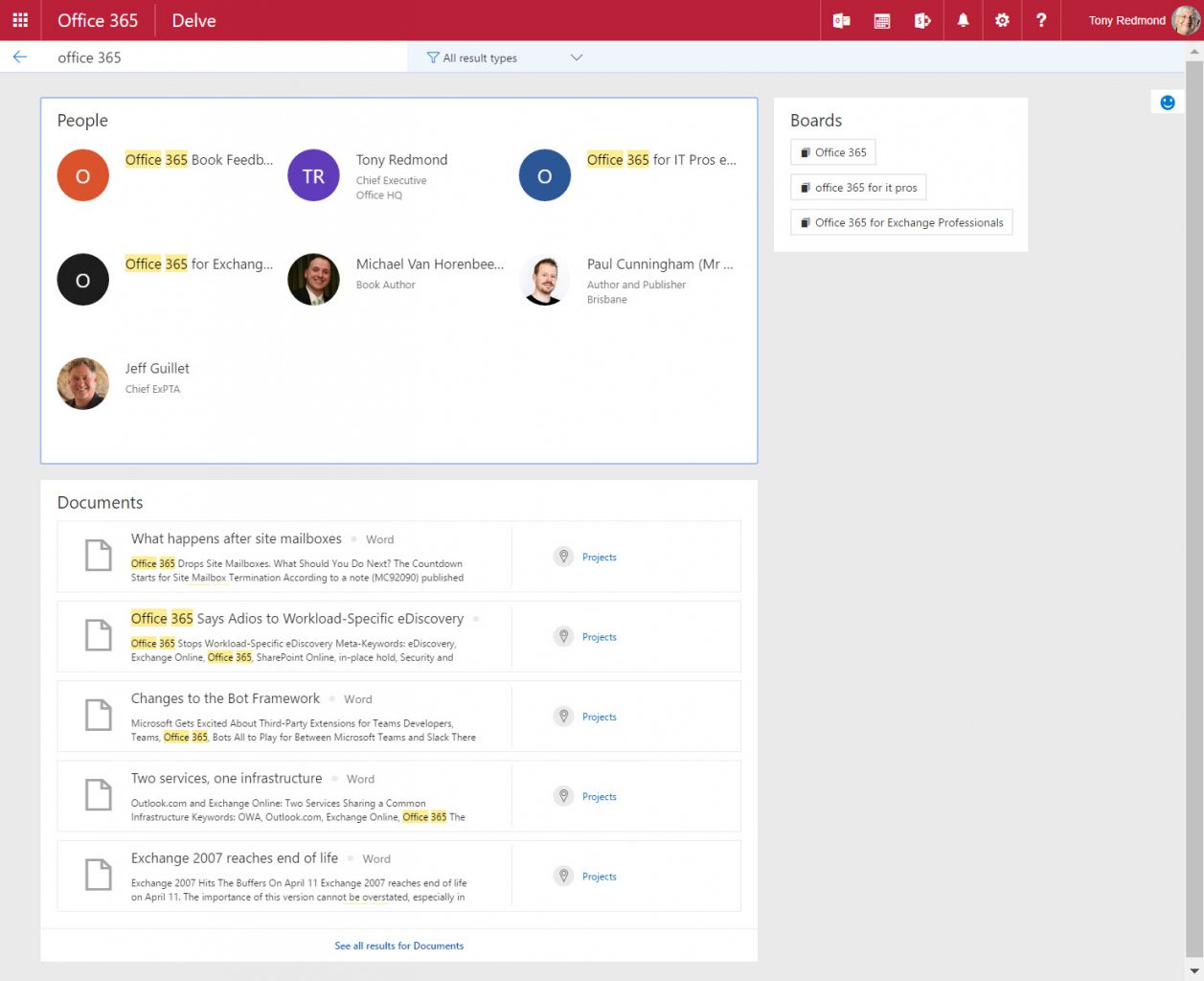 If you use Delve’s “boards” feature (a way to tag documents into collections controlled by a user), any boards where documents are found are also listed (3 are shown in Figure 2). Curiously, one retrograde step in the new search is that you can no longer tag found items to add them to boards. In the past, Delve displayed search results in the same card format as it uses elsewhere to show documents, which meant that you could easily add items to a board. This step backwards is regrettable.

Clicking a user icon brings you to the user’s Delve page and shows you the documents they have worked on most recently. Below the users, we see matching documents. Clicking a document in the list launches an online viewer while clicking the location or person link to the right brings you to the storage location. Remember, Delve only shows information to a user when that user has the permission to see it.

I like Delve’s intelligent search. New items added to Office 365 appear in search results faster and the results seem more precise than the earlier implementation, which is always a good thing. Intelligent search does not mean that users can continue to add rubbish to Office 365 and expect Delve to make sense of what people dump into SharePoint or OneDrive. Paying attention to document titles, properties and tags is still critical to search precision.

The first implementation of Delve uses URLs like https://tenantname-my.sharepoint.com/_layouts/15/me.aspx?u=user-guid&v=home. However, apart from consuming the same content indexes as SharePoint Online does to be able to expose documents to users, no connection exists between SharePoint and Delve. They are entirely different applications.

To reinforce its separate identity within Office 365, Delve is moving to a new endpoint. You know that your tenant has moved over (and can use intelligent search) when you see URLs like https://eur.delve.office.com/delve/?u=eff4cd58-1bb8-4899-94de-795f656b4a18&v=work. The GUID (following ?u= in the URL) for their Azure Active Directory account identifies the user.

The end of Weirdness

A nice side-effect of the move to the new Delve endpoint is the elimination of some of the weird and wonderful results that Delve used to generate, including the infamous “app@sharepoint” syndrome. I shed no tears at this advance as I am quite glad to see background processes return to their proper place – hidden and invisible.

Like any application going through change, the new version of Delve has its moments. For instance, if you click the Home choice in the navigation bar, Delve shows “Popular documents”. As Figure 3 reveals, the new Delve shows me nothing. This is even though I store everything that I create in SharePoint or OneDrive. Other users share documents with me from OneDrive too, so it is a mystery why the new Delve considers me to be unpopular.

Losing access to the documents exposed in the Delve Home view is a pain because it means that Delve doesn’t show me any attachments that I receive via email.

I hesitate in writing about new functionality until a couple of weeks has lapsed because new code often takes time to bed down. This is especially true inside Office 365, where Microsoft might have to “flight” multiple code elements to deliver new functionality within an Office 365 datacenter region. Although other teething issues have disappeared, this one has not. I hoped that some documents would become popular as time went by. As nothing has shown up, I might have to call Microsoft Support.

By the way, for those who wonder, the cute graphic at the top of this piece is Delve’s way of saying “Uuuugh,,, don’t know what happened there!”

Many people encounter the Delve web client but it is my experience that relatively few know that Microsoft also provides a UMP client for Windows 10 (Figure 4) and Windows 10 Mobile as well as apps for Android and iOS. All these clients work well. 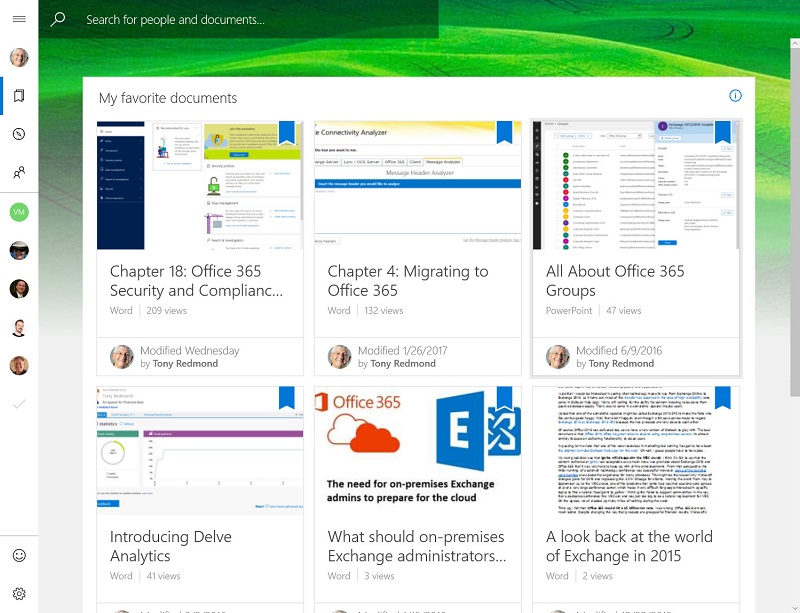 The Importance of Search

People don’t realize how important reliable search is until they do not have it. Outlook desktop users have coped with unreliable searches for years (OWA search is invariably more reliable). As users store more data in the cloud, it is important that search works flawlessly. Even though users are unlikely to help search anytime soon by populating document properties and tags, using Office Graph to gain extra insight into what someone might be looking for just makes sense.