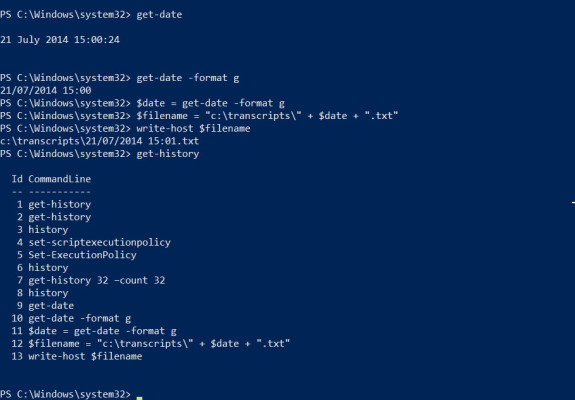 Sometimes it’s useful to have a record of the cmdlets that’s been run in a PowerShell session, either for your own reference or if required by a third party. In this Ask the Admin, I’ll show you how to use the PowerShell get-history cmdlet to get a quick rundown of your command history and how to record a session to a text file.

What is the Get-History PowerShell Cmdlet?

How to Create a PowerShell Transcript File

Although the get-history cmdlet is useful, it only displays the cmdlets run and any given parameters, but doesn’t provide any output that’s returned to the console. For more detailed information, you can configure PowerShell to record the session to a text file.

Transcripts can either be written to the computer’s local hard drive or offloaded to a file share for analysis. PowerShell logging can also be enabled, where information about each cmdlet executed is written to the system event log. For more information, see the Petri IT Knowledgebase article “How to Enable PowerShell Logging.”

Use the following command to start a transcript of a session. Note that the folder must already exist where the transcript will be saved.

If you plan to generate multiple transcripts, then it may be useful to have PowerShell automatically create the filename using a timestamp as follows:

The ‘o’ after –format represents the .NET Framework format specifier for timestamps. The foreach cmdlet filters out the semi-colons from the output of the get-date cmdlet and replaces them with filename-friendly hyphens. Then the full path is built using the result.

Other useful parameters, such as –noclobber (my favorite PowerShell parameter), and –append allow you to prevent the start-transcript cmdlet from overwriting an existing file and add to an existing file, respectively.

Once you’ve finished running the cmdlets you want to record, you can stop the transcript by typing stop-transcript and pressing ENTER.

Using PowerShell to Record the Output of .EXEs

One of the potential shortcomings of start-transcript is that it only records the output of true PowerShell functions and cmdlets, not other commands executed in the console window. Although this may not necessarily be a problem, you can force the output of non-PowerShell cmdlets to be recorded in the transcript, too. All you need to do is pipe the results of the .exe to the out-host cmdlet as shown below.

Creating a PowerShell Transcript for a Remote Session

The start-transcript cmdlet only works in interactive console sessions, so it can’t be used with invoke-command on a remote device.

A workaround for this is to use the out-file cmdlet to pipe output to a file, although the actual commands executed will be missing from the resulting log.