No matter what hypervisor you use, a virtual machine has a common makeup. There are two components:

The metadata of an Azure virtual machine is normally of little value, and everything we care about is in the disks. If we lose the metadata, we can recreate it. But that leads us to an issue.

But – that’s messy, so Microsoft has given us something new to simplify the process of recovering an existing virtual machine.

If you want to perform a recovery of a virtual machine that still exists in Azure, then you have a new option to replace the disks. When you select this process, Azure Backup will:

By reusing the metadata or configuration of the virtual machine, any membership of an availability set/zone is retained and there is no magic to be done!

To start this process you must shut down the virtual machine so that it is a deallocated state in Azure.
You can start the disk recovery process in either one of two places:

Next, you will click the Restore VM button, which will start the Restore process. A Select Restore Point blade appears. Pick the restore point, or backup job, that you want to restore from and click OK.
The Restore Configuration blade opens. Enter the following information: 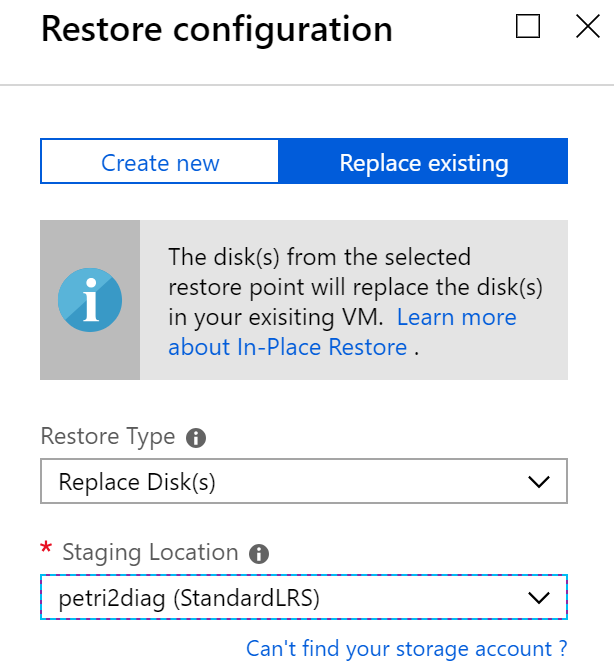 Click OK to allow Azure to validate the job and then click Restore to launch the restore job. You can track the progress of the jobs (the aforementioned backup and restore jobs) by browsing to Backup Jobs (under Monitoring) in the recovery services vault.
You can start the virtual machine once the restore job (update step) has completed.

What About Restore to a New Machine?

I’m afraid, at this time, you will have to use the previously mentioned workarounds for un-managed and managed disks if you want to restore to a new virtual machine and need to create/retain availability set/zone membership.